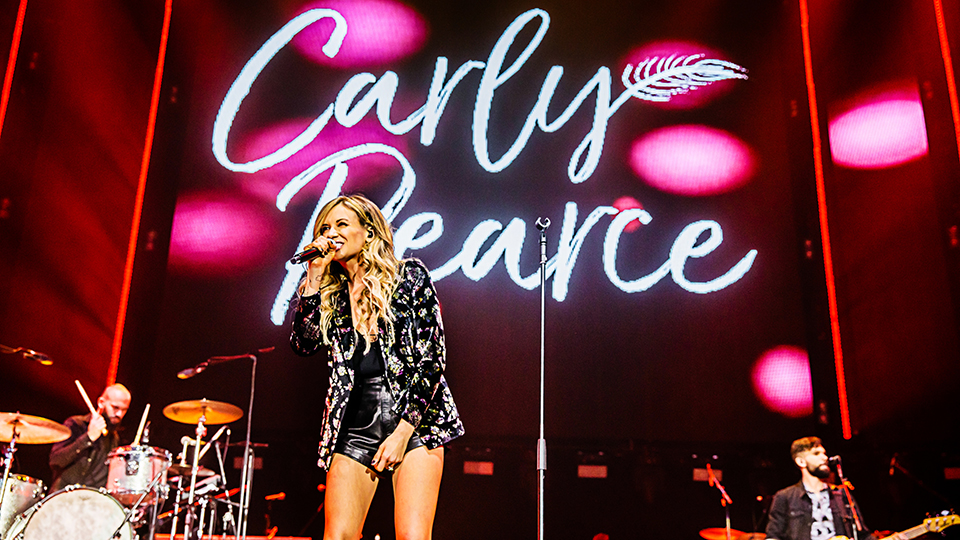 Carly Pearce has been promising to come to the UK for a while now and she finally made good on that promise tonight as she opened the Main Stage at C2C: Country to Country at The O2 Arena in London. Pearce has enjoyed plenty of success since the release of her 2017 debut album Every Little Thing and its title track was a number one smash for her. With new music on the way and her current single Closer to You rising up the charts, expectations were high.

Pearce opened her set with the catchy Careless and despite some sound issues, which were not her fault at all, she captivated the audience in the arena. By second song Playing With Fire, the sound issues had been ironed out and Pearce could be heard loud and clear. She had a noticeable growl in her vocal delivery and a bit more grit than she does on record. Her vocals also sounded a lot looser and free, which translated well in her live performance.

Between songs Pearce was a feisty lady while talking to the audience. She completely engaged with the audience with songs such as Doin’ It Right and the fun Everybody Gonna Talk. A cover of Shania Twain’s Man! I Feel Like a Woman whipped the audience into a frenzy and she really made the song her own. New single Closer to You kept the tempo up and it was a hit with C2C goers.

Taking the audience back to her Kentucky roots, Pearce did a medley of Those Memories of You and Sin Wagon. It was a nice change in pace and it was a style that really suited her. Could a Bluegrass album be in her future? After that performance I hope so!

If My Name Was Whiskey was one of the more emotional moments of the night. Pearce admitted it was her favourite song she’s written and she delivered it with real passion. That led nicely into Every Little Thing where Pearce asked the audience to light up the arena with their phones and make her feel like Lady Antebellum. They obliged and the moment was pretty magical.

Rounding out the set was the fantastic Hide the Wine, Pearce’s second single. It brought the tempo back up and ended on a real high note.

Pearce’s debut London show was an absolute triumph. She’s got incredible stage presence, her vocals sounded strong and her set list was perfect for the occasion. Once her second album drops, hopefully later this year, I hope she comes back for her own headline tour so we can spend a little more time with her.