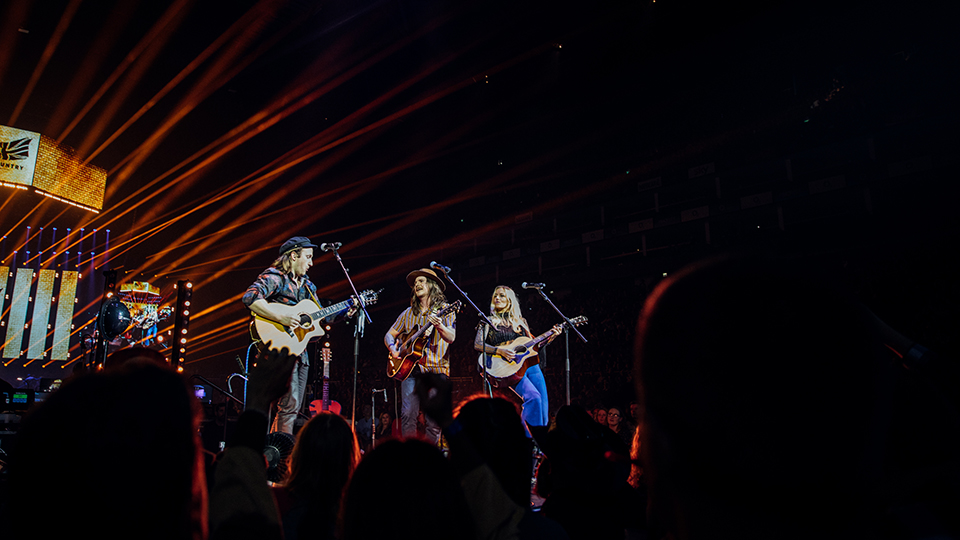 Californian Country trio Fairground Saints – Megan McAllister, Mason Van Valin and Elijah Edwards – have been picking up a lot of buzz around C2C: Country to Country this year. Performing all across the stages within The O2 in London, the band has been building the foundations so they can come back to the UK in the future. Last night they were the first act on the Spotlight Stage inside London’s The O2 Arena.

Fairground Saints opened their set with single Somewhere Down the Line and the thing that struck me immediately was their harmonies. I haven’t heard a tighter set of harmonies at C2C this year and the band’s natural chemistry shone through as they brought their voices together. It was a strong start and the audience already seemed to be familiar with the song.

Next up was California, which saw Megan take lead vocals. The song served to showcase just how versatile the band is. A bit like Little Big Town, Fairground Saints have the ability to sound very different depending on which member is singing lead. California was a gentler more laid-back song and it was gorgeous.

For their final song, the band performed Mary. Again those harmonies were at the front and centre of the performance, and they wowed me. The trio are pretty mesmerising to watch and their talent is clear.

Fairground Saints will come out of C2C as one of the acts that people can’t stop talking about. They brought something a little different to the festival this year and they are a refreshing change to the more modern pop Country leaning of much of C2C. With the reception they’ve been getting, I wouldn’t be surprised if we see them back in the UK as part of Country Music Week later in the year.