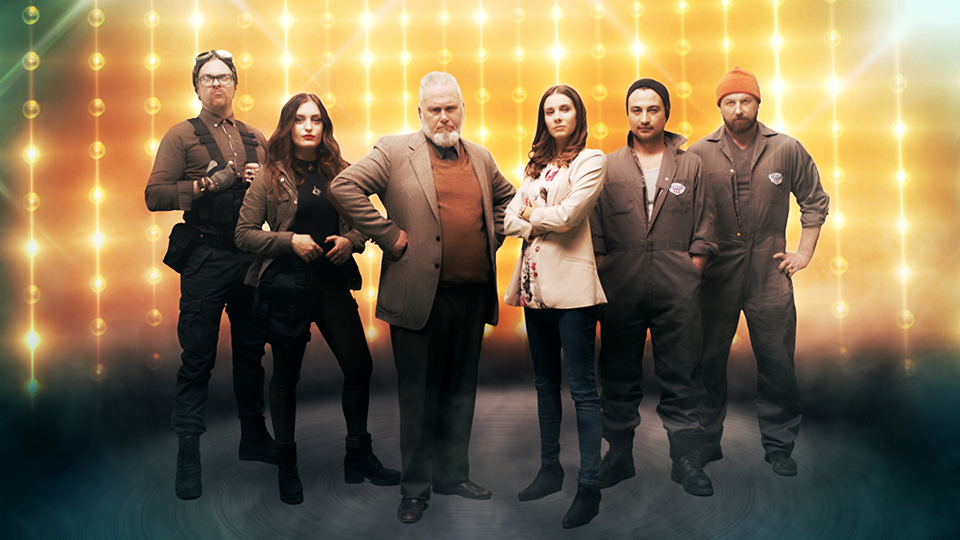 Professional organiser Sheila Smyth (Lisa Solberg) sets her sights on hoarder Murph Evans (Barry Moore) as the subject of her new TV reality pilot Extremely Haunted Hoarders. With a team of people to help her – questionable doctor Lance Ebe (Tony Burgess), divorced clairvoyant couple Caleb (Ry Barrett) and Chloe (Elma Begovic) Black, removal men Duke (Marcus Ludlow) and The Falcon (Justin Darmanin, and day worker Charles Ivey – Sheila sets about her task. The team soon realise they’ve taken on much more than they can handle and they slowly begin to lose their minds as they stumble upon some of Murph’s shocking secrets.

The Hoard is a mockumentary that very cleverly takes the look-and-feel of the many hoarder shows that can be found on reality TV. Murph is a deceptive and unwilling subject that allows the Extremely Haunted Hoarders team into his many homes, all full of useless and unneeded objects, but doesn’t seem to actually want any help. Holding the whole team together is Sheila, who really has no idea of the task ahead of her or that the people she’s assembled are probably not the best people for the jobs.

While the mockumentary aspect of the film is spot on, it takes a little too long to show its hand and for the plot to kick into second gear. You’d be forgiven for the first hour of thinking that The Hoard isn’t actually a horror film but the final 30 minutes or so, when the film goes crazy, definitely serves up some blood and guts. That first hour could have been tighter though. The film spends a lot of time acquainting you with the various characters but there are some repetitive scenes that don’t really pay off. At first the team is looking at three houses that Murph owns but the majority of the action focuses on a fourth one he’d kept secret.

Where The Hoard succeeds is with its comedy moments, of which there are plenty. The dialogue is sharp and there are some well-executed visual gags, particularly involving Derek ‘Duke’ Jago, the cocaine-addicted lunatic that leads the removal team. As long as you don’t mind a bit of gross-out humour, you’ll find plenty to laugh at.

The cast are all very strong in their respective roles. Lisa Solberg as Sheila is much more down-to-earth than the characters that surround her and Justin Darmanin impresses as The Falcon, the put-upon removal man always at the end of Duke’s temper and orders. Tony Burgess delivers a wonderfully eccentric performance as the kleptomaniac Dr. Lance Ebe and he really commits to the material.

The Hoard has a lot going for it but for me, I thought it was a little too muddled in places. It doesn’t quite know what kind of film it wants to be and when the horror does arrive, it feels a little too late. A shorter run time and a quicker introduction of the twist, would have benefitted the film. That being said the cast are all very watchable, there’s no faulting the production values and the direction and writing are sharp. To get the most out of The Hoard, you should be familiar with the kind of reality show its pointing fun at otherwise you might find yourself completely bewildered.