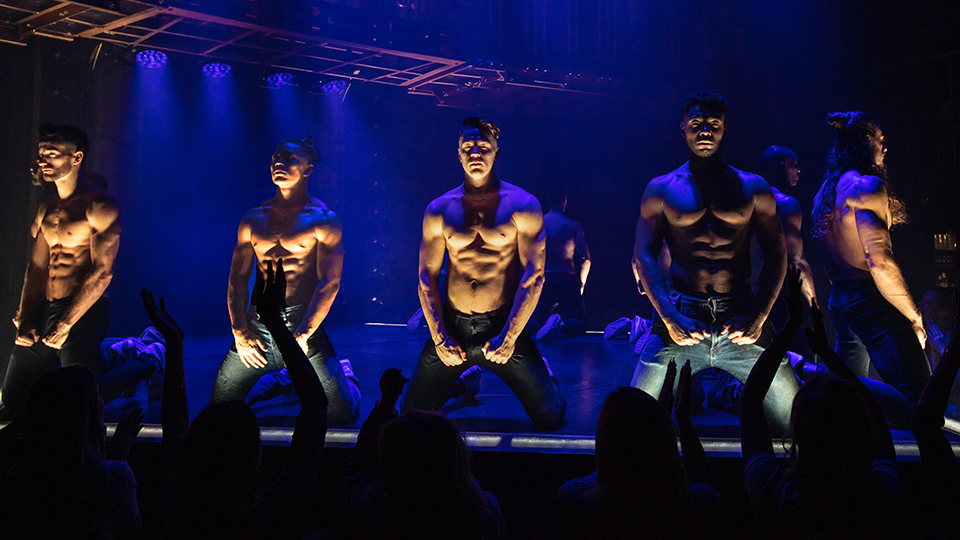 When Magic Mike rocketed to fame in 2012 it left women across the globe open mouthed and every so slightly titillated. Now its younger brother is giving women what they really really want. A chance to be that woman that Mike, and his brotherhood of exceedingly attractive men, get their hands, and other parts of their bodies (wink wink), on…

From the minute the lights go down every woman in that tiny arena is already on edge, in the best way possible. The music is pulsing, hearts are already racing and then a YMCA-esque trope appears on stage. And my immediate thought is ‘dear god don’t let them make it cheesy’. Thankfully this is when Sophie Linder-Lee is plucked from the audience and she quickly becomes the voice of every woman in there. She’s fawning over men, telling it like it is, and frankly speaking the damn truth for once about what women actually want in a man…seriously guys it’s NOT that hard! She’s effortlessly funny and filthy (in a great way) and it only adds to the experience.

Sadly our original Magic Mike, Channing Tatum, has hung up his thong for the time being, instead choosing to channel his, ahem talents, into the backstage role as co-director and producer. What I love is that Tatum and Alison Faulk have taken the MM brand one step further and rather making it about the men, it’s now all about us ladies. With a magic unicorn (who Tatum voices) and an MC telling it like it is the whole shows female empowerment brand stays very much in tact. And though I would be lying if I said I didn’t want to see Tatum up close and personal, him taking a back seat here is the right choice. Instead we meet a group of dashing and diverse men, a pick-n-mix of something for everyone eye-candy, who look good in a suit, in a t-shirt and jeans, or even just a thong. That being said Channing Tatum has said he wants to get back in shape to make a surprise appearance so maybe you’ll get lucky…

Each of the performers gives it their all and I was very appreciative of each and every one of them…if you know what I mean. Special mention to Manny Tsakanika who played our young Mike, his dancing was sublime. And they do try their best to make every woman in there feel unique and special, hard to do when there’s 200 screaming women (and even a few men) practically begging to be picked out. If you’re lucky enough to be pulled on stage then don’t worry, there’s a safe word and it’s all consensual as they each whisper in your ear telling you what to do next.

But if it’s a story line you’ve come for then you are very much in the wrong place. Sure there is a sort of plot to follow. Our very own Magic Mike is plucked from the audience, seemingly one of the waiters encouraging you to buy drinks all night long, he’s a naive boy unsure of how to woo a woman. But have no fear for the rest of the strippers are here! Hooray! They’ll teach him how to tick every woman’s boxes. That doesn’t mean this young waiter automatically becomes a butler, rather it takes a page out of the Magic Mike XL book. Our Mike will learn to tap dance, dance in the rain (front row you WILL get wet, pun not intended), and even serenade us. You’ll sing, you’ll laugh, you’ll slow dance with your best friend, and then watch a man dangle from the ceiling in nothing but his pants…standard night out really. Yet for me this is where Magic Mike Live has gone one step beyond. The nakedness (not full monty, easy on ladies) is wonderful, but it’s also beautifully choreographed and executed. A true testament to Luke Broadlick who choreographs the whole show. After all, what woman doesn’t want a man who can sing, dance, swing from the air like Tarzan?

And like with all shows the finale spoke true of its origins. Bringing it right back to the dance that started it all, Tatum’s rendition of Ginuwine’s ‘Pony’. You’ll be up on your feet dancing, screaming and singing at the top of your lungs as the boys grind and hump the stage, flashing you their abs or when they get up close and personal. Really the perfect place for a girls night out, especially after a few drinks…

Magic Mike Live is so much more than a strip show. It’s a platform for self love and expressing yourself, it’s a place to let loose, indulge in your fantasy and frankly to just have fun. But if you’re after a show that gives you a plot and story line then, honey, maybe you would be better off seeing Les Mis as David Morgan suggests. It’s sexy with a dash of cringe-worthy-ness, but ultimately a total knock out. You’ll either leave needing a lie down or hungry for more…

Based on the smash-hit films, Channing Tatum’s spectacular and intimate show has arrived at the Hippodrome Casino to take London by storm. The 360-degree production promises to get your heart racing with empowering, exhilarating and acrobatic routines – making sure that you have an unforgettable night out. With performances at 7.30pm or 10pm, this is the perfect girls’ night out.

PRICE: £185 per person based on one night’s accommodation at St Giles London and tickets to Magic Mike at The Theatre at Hippodrome Casino. Valid for arrival on 10th May 2019. To book, visit www.superbreak.com or call 0800 042 0288.