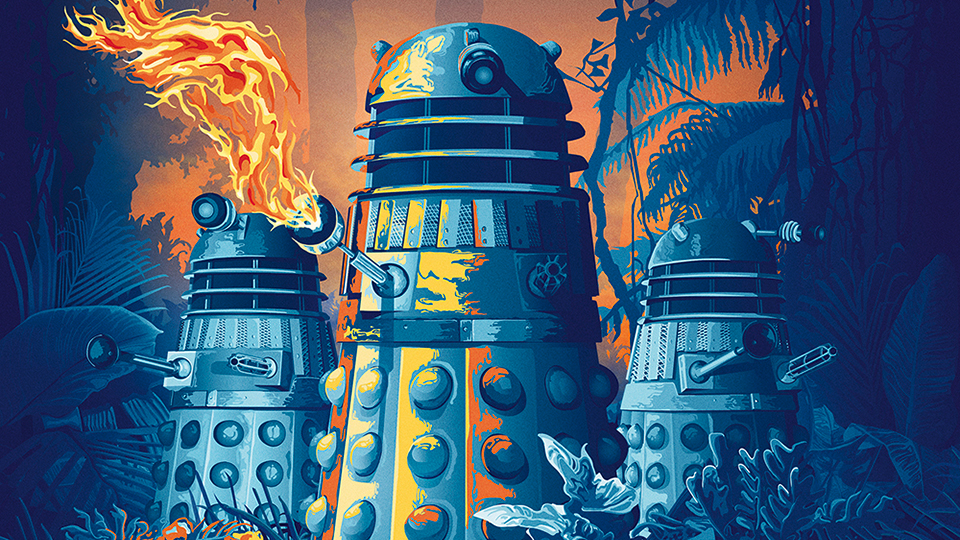 The Daleks’ Master Plan, from the third season of Doctor Who (1965/66), is an epic twelve-part adventure featuring First Doctor William Hartnell. It arrived at the height of Sixties’ Dalekmania. The whole story, plus the teaser episode Mission to the Unknown, is now available to enjoy in a magnificently-produced seven-vinyl box-set.

With ten out of the thirteen episodes presented in this release missing from the BBC archives, the story is for the most part only available to enjoy as an audio experience. This suits 1960s television admirably well, because the action is dialogue-driven. To set the scene, linking narration is supplied by Peter Purves, the actor best-known for his long stint as a Blue Peter presenter, but who played the Doctor’s companion Steven during this period.

The same narration is used that was recorded in the early 2000s for the CD release of the story, and the episode tracks can be downloaded and played on electronic devices. Yet although there’s nothing new in the content, this is a must-have collector’s item for a particular type of fan. If you enjoy physical products, and appreciate the aesthetics of beautiful design, and love the feel of 180g vinyl in your hand, and appreciate the warmth of the vinyl format beneath the needle, then you will simply adore this product. On any objective measure, it is gorgeous.

Striking cover art depicts the flamethrower Dalek and two scouts charging through the dense jungle of Kembel, and on the reverse, the TARDIS is materialising. The contrasting shades of orange and TARDIS-blue are eye-catching. Inside the box, each of the seven vinyls is packaged within a TARDIS inlay and individual sleeves that fit together to depict a Dalek on one side and the TARDIS in space on the other. The highest-quality vinyls are in TARDIS-blue for the standard edition, or speckled orange in limited edition (available on Amazon). Attention to detail extends to an etching of the TARDIS on the blank B-side of the first record, which features the single Mission to the Unknown episode. The other vinyls have one episode on each side.

Apart from the fantastic production values, The Daleks’ Master Plan is richly enjoyable as a story in its own right. The episode Mission to the Unknown has the distinction of being the only instalment not to feature the Doctor, his companions or the TARDIS. By that time, the Daleks were so wildly popular that their presence alone was enough to carry the show for a short teaser trailer to the main event.

The Daleks’ Master Plan is pure Terry Nation: cinematic in scope and pure action/adventure. Some writers for the series would turn in stale scripts, too conscious of the trappings of limited budgets and small studio sets. Never Nation. Close your eyes as you listen, and your imagination creates a space adventure to rival Star Wars.

The plot is delightfully bonkers. The Doctor (William Hartnell) Steven (Peter Purves) and Katarina (Adrienne Hill) arrive on Kembel, and after an initially hostile meeting, find an ally in Space Agent Bret Vyon (Nicholas Courtney), who warns them of the presence of Daleks on the planet. A federation, led by Mavic Chen (Kevin Stoney) is allying themselves with the Daleks in order to conquer the galaxy using a Time Destructor… Thrown in to all this are digressions to Ancient Egypt and a silent movie set, as well as a Christmas-themed episode in which the Doctor famously turns to the camera and says, “And a very Merry Christmas to all of you at home.” Mad, experimental, daring and hugely-entertaining storytelling!

This adventure is also notable for the introduction of a Doctor Who stalwart – Nicholas Courtney. It was only a short step from Bret Vyon to the Brigadier, the Doctor’s most loyal ally of the late 1960s and early 1970s. He clearly relishes playing the ‘James Bond in space’ character for The Daleks’ Master Plan.

This vinyl release of The Daleks’ Master Plan is the kind of product that sends fans into paroxysms of excitement. Nothing quite captures that feeling of childhood thrill as a physical product you’ve always wanted but never even dreamed you’d have. As an adult, you get to savour the very high quality of this release on top of the nostalgic delight. The only minor niggle is the use of the new logo on the cover – an understandable marketing decision, but the artwork is a love letter to 1960s design, and use of the Hartnell logo would have resulted in perfection. That aside, The Daleks’ Master Plan is a thrilling item for any fan: a beautifully-made talking point that vinyl lovers will adore.