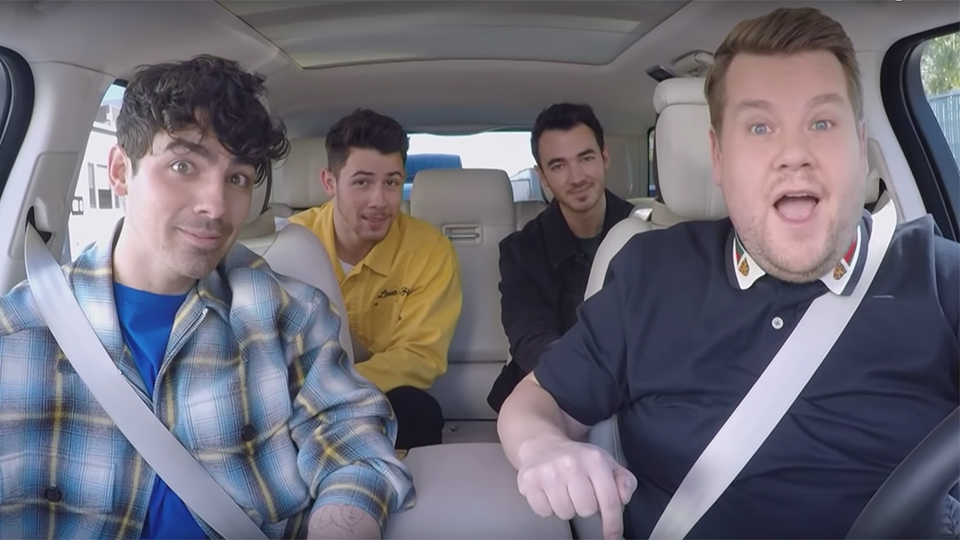 The secret is out – Jonas Brothers are back together and they have new music.

The chart-topping, multi-platinum brothers will release new single Sucker tomorrow (Friday 1st March 2019) and you can hear a bit of the track courtesy of a teaser for The Late Late Show with James Corden. Watch it:

Jonas Brothers are celebrating their reunion by appearing on James Corden’s late night chat show every night next week. In the video Corden picks up each of the members – Joe, Kevin and Nick – before they all launch into new song Sucker.

The synopsis for the Jonas Brothers take over of The Late Late Show with James Corden is:

When James Corden picks up Joe Jonas to carpool through Los Angeles, two unexpected passengers, Nick and Kevin Jonas, hop in and have a message for James: they’re back and kicking off their return with a week of episodes on The Late Late Show and their own Carpool Karaoke.

It’s been six years since the Jonas Brothers worked together. Over their career to date they’ve sold more than 17 million albums and amassed up more than 1 billion streams across the world.

During their time apart, each member has continued making music with Joe forming DNCE, and Kevin and Nick pursuing solo careers.

In this article:James Corden, Jonas Brothers