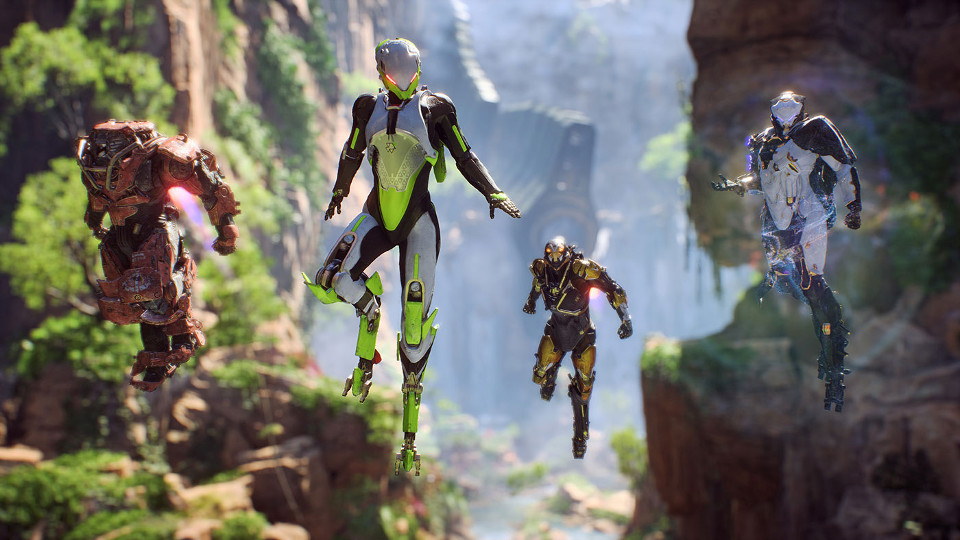 I gave my first impressions of Anthem after my first weekend with the PC version of the game. This saw me climb the first 10 levels and get a good grasp of the combat and different modes. Since then there’s been a large day one patch to address many launch issues. I’ve since sunk over a week more into the game and tried out the Xbox One version so it’s now time for my review.

Anthem is an online multiplayer RPG/Shooter from EA and BioWare in the vein of Destiny 2 and Warframe. There are a lot of similarities between these games but also plenty of big differences. Anthem has a big focus on co-operative multiplayer but also, as you’d expect from a BioWare title, a desire to tell a complex and involving story. Reviewing a game like Anthem is tough because it’s always going to feel unfinished and it’s impossible for the developers to put everything in right from the start.

The game is set on an alien world in a region known as Bastion. Here we are introduced to a fortified city known as Fort Tarsis which is a refuge for humans and also your home. Players take the role of a male or female freelancer whose job is to protect the city and those who live within. The only way to leave the city is with the use of Javelin exosuits which look like a cross between Marvel’s Iron Man and Halo’s Master Chief.

There are four different Javelin suits to choose from which are Ranger, Colossus, Interceptor and Storm. Ranger is balanced between offence and defence. Colossus is the Tank class that can take more damage and taunt enemies. Interceptor is the most agile and plays like a Rogue with devastating melee-combat. Finally Storm is like a Mage and can deal damage from a distance.

Everyone begins the game with the Ranger to learn the basics. For the most part controls are similar to any other shooter. Where things get interesting is tapping Shift while in the air which activates your jets and lets you fly around or hover. The freedom of movement is wonderful and each of the Javelin’s are a lot of fun to control. One thing to be careful of is the temperature of your jets because if they overheat then you plummet back to the ground. A neat mechanic is that you can cool them by performing steep dives or flying through waterfalls.

At level 2 you get to choose your first Javelin. The other three are given to you at levels 8, 16 and 26 as you make your way to the current level cap of 30. When I play RPG games I usually go for the Tank class so naturally I favoured the Colossus. It moves similar to the others but it’s much heavier and bulkier. This translates to slower movement but also has its advantages. The most obvious one is that the Colossus can take a serious amount of punishment. Each Javelin has its own set of abilities and an ultimate attack.

The combat is incredibly polished and features superb gunplay. Combined with the near limitless freedom of movement allows you to tackle any situation pretty much however you like. You’re constantly mobile and need to be aware of your environment to get the most out of it. Enemies come in all shapes and sizes from simple scorpions to soldiers and giant beasts. Killing enemies has a chance to drop health, ammo and loot which you collect by simply running over.

Watch the Anthem Tips and Tricks on the Basics of Javelin Combat video below:

After every mission you’re forced to head back to Fort Tarsis. This is designed as a single player experience so you’ll find yourself running around on your own while talking to the various NPC’s. The areas open to you are limited at first but gradually open up over as you progress. Fort Tarsis is home to many brilliant characters that you’ll be interacting with.

All the NPC’s look stunning and are very lifelike with superb voice acting. Each character is filled with personality and it genuinely feels like you’re getting to know them. Conversations have simple binary choices and for the most part what you choose doesn’t appear to affect much other than your reputation with the various factions. This seems strange but knowing BioWare I wouldn’t be surprised if your choices eventually have greater impact on future events.

Fort Tarsis is a confusing place to learn your way around. This is helped by a simple compass at the top of the screen that shows you the direction to head for points of interest. You also have access to an overhead map and the game shows waypoints to get you to where you need to be. As lovely as it looks, I must admit getting around Fort Taris does become rather tedious after a while.

Watch the Anthem story trailer below:

Before heading outside the walls you need to visit the Forge. Here you get to change between your different Javelins, create loadouts and swap or craft gear. I absolutely loved that Anthem lets you own each of the Javelins so you’re not stuck with the same one. You also find gear for each of them so that when you eventually unlock a new one you’ll have a variety of gear ready to use. The loadout feature is also neat because there is an option to clone each Javelin to save multiple loadouts. This allows you to create say a build for solo play and others for co-op depending on what role you need to fulfil.

Once you’re ready to tackle a mission there’s a cool animation of you climbing in your Javelin suit. Much of your time outside of Fort Tarsis is spent tackling Expeditions which are missions that are given to you by the NPCs. These usually involve following waypoints and then collecting something, protecting something or killing waves of enemies. These missions do get repetitive but are made more interesting thanks to the fantastic variety of the world and the brilliant combat.

There’s one particularly annoying mission a few hours in called Challenges of the Legionnaires. This has you track down four hidden tombs in free play. Once you find them you need to gain access but doing so requires you to grind through a big list of seemingly pointless tasks. These include opening x number of chests, reviving x number of players, performing x number of multi-kills, I’m sure you get the idea. The worst part is that these take a very long time to complete and you need to overcome them in order to progress the story. I’m really hoping this mission gets reworked in a future patch and that we don’t get more like it.

In addition to Expeditions are Contracts, Freeplay, World Events, Strongholds and Cataclysms. Contracts are tough side missions for NPCs, Strongholds are like dungeon runs where you have bosses to defeat, Cataclysms will be the more challenging endgame content. Freeplay lets you leave Fort Tarsis behind and just go exploring. It’s useful for collecting crafting materials and also for tackling random world events. Almost everything you do in Anthem is open to matchmaking. Here you and up to three friends (or random strangers) can come together to tackle the content together. Flying around in a group and taking down tough enemies together is a lot of fun.

Watch the Anthem endgame trailer below:

As much as I’m enjoying Anthem the game does currently have its issues. Being forced back to Fort Tarsis after each mission gets annoying, especially when trying to play with friends. It spoils the pacing and prevents you from just doing a string of missions. It’s also necessary to visit the Forge each time you want to make a change to your loadout. So if you’re out saving the world and obtain a new shiny item, you have to endure several loading screens while you go back and change things around.

The loading screens are actually painful to sit through, particularly if you’re running the game from a mechanical hard drive. The day one patch did help speed things up for older drives but it still takes a long time, particularly with how many loading screens there are. To reduce this problem as much as possible I highly recommend running Anthem from an SSD drive. After moving the game from a mechanical drive to an SSD I found things noticeably faster.

The speed you get through loading screens can also spoil the co-op missions a bit. Those with faster drives get into the game quicker and are often zooming ahead while players with slower drives catch up. This might not be so bad but the game expects your team to stay together, so when one player shoots off ahead, the rest get 25 seconds to catch up or be faced with another loading screen while they are moved closer.

View some Anthem screenshots in our gallery:

Despite being a co-op game it often feels like you’re playing a single player game alongside other players. This can be made worse on the lower difficulties because things are too easy so there’s little need to work together. The harder difficulties do demand more teamwork and the I expect the game becomes a real challenge one you start tacking the Grandmaster difficulties which reward the best loot. Much of the teamwork at the moment involves reviving each other and timing your abilities to create devastating combo attacks. Co-ordinating your attacks is often near impossible when the voice chat stops working and it currently seems to do nothing but break on PC. The EF Games team found it easier and much more reliable to use a different voice chat application outside of Anthem/Origin.

At the moment it’s hard to judge Anthem’s end game content but it currently feels like this is really where the game begins. A quick look at the Anthem roadmap on the official website shows that the development team are hard at work on new story content, fixes, improvements, events and more. It’s also worth mentioning there are no season passes, paid DLC and the optional microtransactions are currently for cosmetic items and reasonably priced should you feel the urge to spend real world cash.

Overall I feel that Anthem has massive potential and has strong foundations to build on. I was amazed at how stable the game has been and, for me at least, it has an addictive quality that keeps me coming back for more. It’s easy to pick up and hard to put down. I’m enjoying the loot cycle and constantly upgrading my different Javelin. Sure there are issues but it’s very early days for a game like this and with the developers listening to the community things should only improve.

Anthem was reviewed using a digital press code supplied by the publisher.

In this article:Anthem, BioWare, EA, Origin, PC, PS4, Xbox One