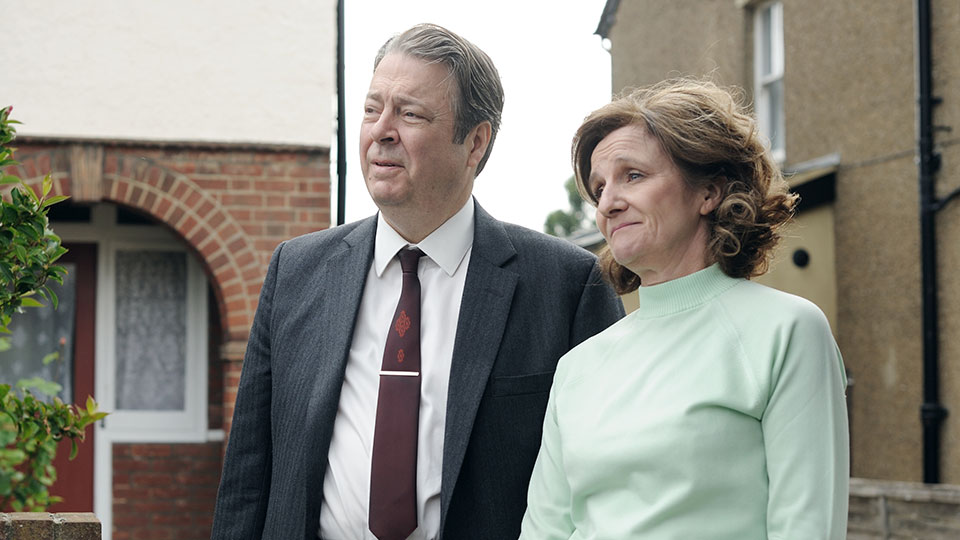 Endeavour is back on our screens and it’s half way through its sixth series.

The much-loved Inspector Morse prequel is a firm favourite and it’s one of ITV‘s most popular dramas. This series sees some major changes for the central characters and lead star Shaun Evans steps behind the camera to direct an episode.

I caught up with Caroline O’Neill who plays Win Thursday in Endeavour to find out what’s to come, discuss the storylines for her character, and to talk about the show’s enduring popularity.

Hi Caroline. How are you and where does this Q&A find you?

Hi, I am very well thank you and looking forward to seeing what 2019 brings – and of course watching the new series of Endeavour.

Endeavour is back on our screens, with the first of four new films already aired. What can you tease about what’s to come during the rest of the series?

There are huge changes, the team have dispersed into different divisions of the force with some new faces adding some very interesting dynamics. And Endeavour has been sent back to uniform.

The relationship between Win and Fred has become very strained now that Fred hasn’t been able to retire. What kind of dynamic can we expect between the characters this series?

It is a very difficult time. Although Win is back, all is not well and a huge cloud hangs over their house and the relationship between them. Win has a lot to think about over the next few months.

You work closely with Roger Allam in the series. What is he like as a scene partner?

Roger is a rather marvellous actor and a joy to work with, he nails it every time, so it’s a pleasure to work with him. Having played the role for a few years you do have a deep understanding of the character.

Series 6 sees big changes for Win and Fred’s daughter Joan too. How do those changes affect the family?

Joan is an adult who has left home and is starting out in a new career, having had some incredibly difficult times. When the children fly the nest the house feels empty and it is the beginning of a new stage in our lives, it takes some adjusting and there is a sense of loss, an emptiness fills the house. Which was why Win and Fred started Ballroom Dancing again.

In what ways would you say that you relate to Win? Are there any similarities that you share?

There are always some elements of yourself that you find in any character. She is a strong, hard working loving parent who wants the best for her children and of course worries about them all the time. I can certainly relate to that.

Shaun Evans has directed the second of the four films. What was he like as a director?

I have worked with Shaun as a director before on an episode of Casualty as well as the episode of Endeavour he directed and he is an absolute dream. He just knows what to say to actors to create the mood in the scene he wants and because he has a warm, generous spirit it’s a fabulous working atmosphere. I can’t wait till next time…..I am sure we will be seeing a lot more of Shaun directing.

What do you think is the secret to Endeavour’s huge popularity?

There has always been an avid audience for Colin Dexter’s work and the brilliant writing of the series by the fantastic Russell Lewis, has to be a huge part of it. Russell has brought these wonderful characters to the screen. The producers, cast, the whole team working on this show come together to deliver quality drama at its best. And everyone loves a crime to solve!

If you could play any other character in Endeavour, who would you choose and why?

It would have to be Endeavour, to grapple with the wonderful complexities of the crimes and solve them so brilliantly. It’s most actor’s dream to play the title role in a successful series like Endeavour. A female Endeavour… Not sure what Colin Dexter would think… And of course this is a fantasy as I am a tad too old. Having said that I feel very lucky to have had the opportunity to play Win, she’s just great.

At the moment there is nothing in the pipeline, but that can change on a sixpence…so figures crossed!

In this article:Caroline O'Neill, Endeavour, ITV