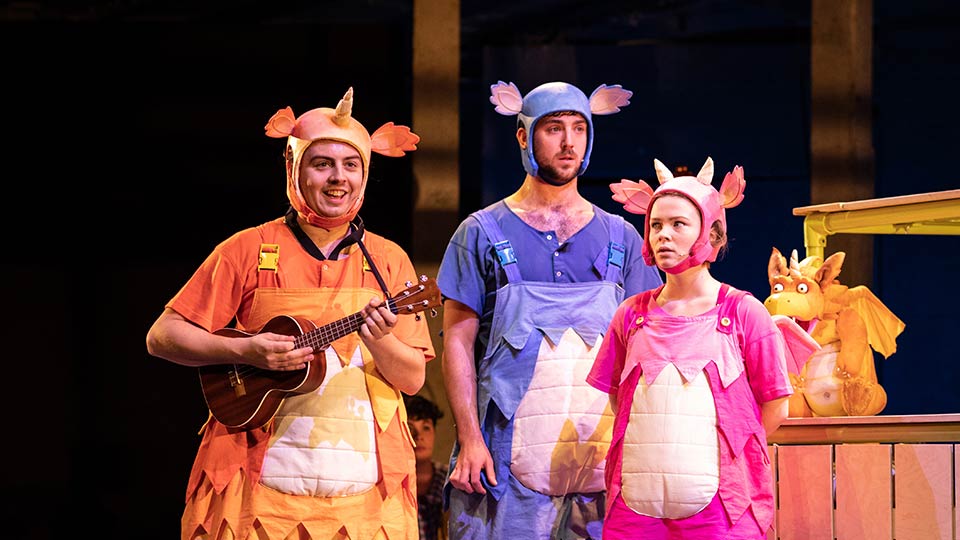 Production images have been released of the world premiere stage adaptation of Zog, based on the book by Julia Donaldson with illustrations by Axel Scheffler (who also made The Gruffalo), now in previews at Rose Theatre Kingston prior to an official opening on Tuesday 19th February and a six-month UK Tour.

Zog is adapted and directed by Mike Shepherd (founder and Artistic Director of Kneehigh) with an original folk score by Johnny Flynn and it promises to be fun for all the family. The cast features Elliot MacKenzie (professional debut) as Zog, Emily Benjamin (Bat Out Of Hell) as Princess Pearl, Robert Ginty (Salome and Coriolanus, Royal Shakespeare Company) as Sir Gadabout the Great and Euan Wilson (Stick Man, UK Tour) as Madame Dragon, with Dixie McDevitt (National Youth Theatre alumni) as Ensemble. The cast of actor-puppeteers will bring the world of Zog to life with handcrafted puppets designed and created by Little Angel Theatre co-founder Lyndie Wright.

Large and keen, Zog is so eager to win a golden star at Madam Dragon’s school, where dragons learn all the things that dragons need to know. Zog tries so very hard, perhaps too hard. Luckily, the plucky Princess Pearl is there to look after him, even though he faces a duel with Sir Gadabout the Great.

See www.ZogLive.com for more details and to find the nearest theatre to you as Zog takes off on a UK tour.

In this article:Mike Shepherd, Zog