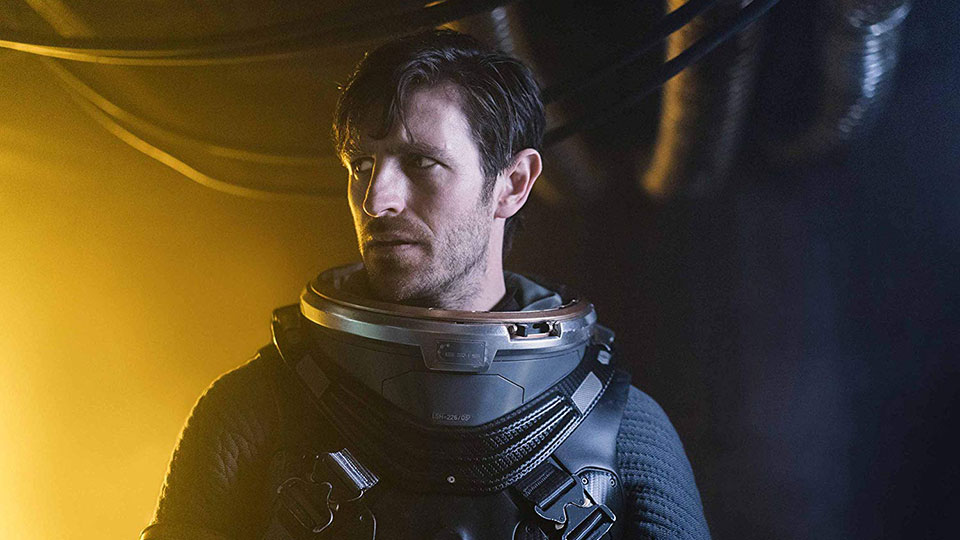 Irish actor Eoin Macken became a household name in the UK after starring as Sir Gwaine in the BBC series Merlin.

From 2014 to 2017 he starred in the hit US medical drama The Night Shift and he recently appeared opposite Noomi Rapace in Netflix action-thriller Close. Now he’s one of the leads in new Netflix series Nightflyers, which was released in the UK recently.

I caught up with Eoin to discuss Nightflyers, find out all about his character in the show, and to talk about his upcoming feature film Here Are the Young Men.

Nightflyers recently premiered on Netflix. What can people expect from the show?

Nightflyers is based on George R. R. Martin’s book from the 80s. It’s a little bit like The Shining meets Event Horizon or Alien. It’s a visceral horror thriller about a group of scientists who are sent off to space to try and meet this alien race, the Volcryn, which my character, Karl D’Branin who is an astro-physicist, believes may be able to harness the energy of the universe and hopefully save the earth. The future on Earth is a bit messed up so he’s hoping that maybe they can help us fix it.

In the first episode we see Karl make a heartbreaking decision, which is to leave his wife and go on this mission for two years. What else do we need to know about your character going into the show?

He has to leave his wife to go off into space, which is difficult, but he’s also got a very deep-seated fractured personal life to do with his daughter as well. At the start fragments haunt him as he goes deeper into space. He’s a very obsessive individual but he’s also very driven. He’s the only one who really actually understands how to find the Volcryn. The problem is he’s not really somebody who wants to be leading this group of scientists and so he ends up with a lot of fractured division among all the people that are going into space.

The show has an incredible cast. What’s it like for you to be able to play off against such fantastic actors?

It’s great. I mean when you work with people like Gretchen Moll, it’s great fun because she’s very instinctive and she’s lovely. The most important thing about doing a show is working with people that you like and you can bounce off. People like Jodi Turner-Smith and Sam Strike are fantastic and it helps when you work with people you can react organically to that particular reactor organically, especially when you’re doing this type of show you want to have a good dynamic.

One of the things that really impressed me about this show is the amazing production values. What’s it like for you to go from a medical drama like The Night Shift to Nightflyers, which is packed with special effects and set in space? Was it an adjustment for you?

No, no… what was really funny about it actually was that they built all the sets. They’re just physically had these big sprawling huge space tunnels so there wasn’t a huge amount of CGI. It gave a certain organic, visceral type of feel to it which was great because you want to have that kind of texture around you. It was very claustrophobic the way the sets were geometrically design so it just heightened what the experience was. Working on sets with such a scale just elevates the physical geographical feeling of where you are.

Netflix are a co-producer on this show. Does that give you more freedom to craft a show that’s different to network television?

Yeah it does. I think that’s great in a way because they really allow the creative process to unfurl. They don’t butt in too much, which is great, because they trust the people that they’ve got on board the production to really explore the scenes and what they’re doing. That extends all the way from the creative down through to the cinematography and actors, which is what you want in a show like this. The show is a bit bananas and it’s got a touch of the crazy to it. I think it’s important that let the creatives play with it.

The show really is crazy and there’s so much going on, even in just the first episode. Is that what drew you in to the show in the first place?

Yeah! Initially the first script was so weird and bonkers. I talked to Mike Cahill, who directed the first episode, and Jeff (Buhler) and they had these really crazy ideas about where they wanted to go. I just thought the idea of sending these people into space to possibly meet aliens, and you don’t know if these entities are going to be benevolent or if they’re going to want to kill you which is touched on in the first episode, is very interesting. Why should these creatures or things want to help you? What if they do want to kill you? I think that these scientists have to have a very specific mindset to go all the way into space or they may not come back. I thought that was fascinating to understand the psychological journey of these characters and what they’re doing and why they want to go out there.

The show aired in the US at the end of last year. Have you heard any murmurings about a second season?

I have no idea. I’d be the last person to know. They always keep us in the dark about these things. I probably wouldn’t know until I actually turn up and we’re shooting the next day. I have no idea yet.

I do! I directed a film called Here Are the Young Men, which has a couple of young English actors in it – Finn Cole, Dean-Charles Chapman and Conleth Hill – it’s got a really big cast. We’re just in the process of finishing post-production at the moment so it’s almost done. Hopefully that’ll be out later on this year. It’s based off an Irish book of the same by a guy called Rob Doyle and I worked on the screenplay the last couple of years. It’s a bit like Spring Breakers meets Requiem For A Dream meets Trainspotting.

This isn’t the first time you’ve stepped behind the camera. What was it like to make this film?

I enjoy the process of going from acting to working in writing or directing or doing cinematography and editing because I like playing between the different things. It was actually a lot of fun working with people I’ve worked with before and some of the crew worked with me on Nightflyers as well. You want to work with people you like. Filming is a lot of hard work and it’s a long process, For me it was nice to be back home in Ireland working because I hadn’t for a long time.

Why should people grab their remote control and tune in to Nightflyers?

When the show really gets going you get really sucked into it because it poses some really interesting and philosophical questions. When you get into it I think it’s interesting just watching how people go through their psychological journey but also the questions it poses about the idea of should you go and try and meet intelligent lifeforms out in space and what would you do when that happens? If they are more advanced, how are we going to cope with that? I think those questions are quite pertinent.

Nightflyers is available to stream now on Netflix. Watch the promo for the series below: