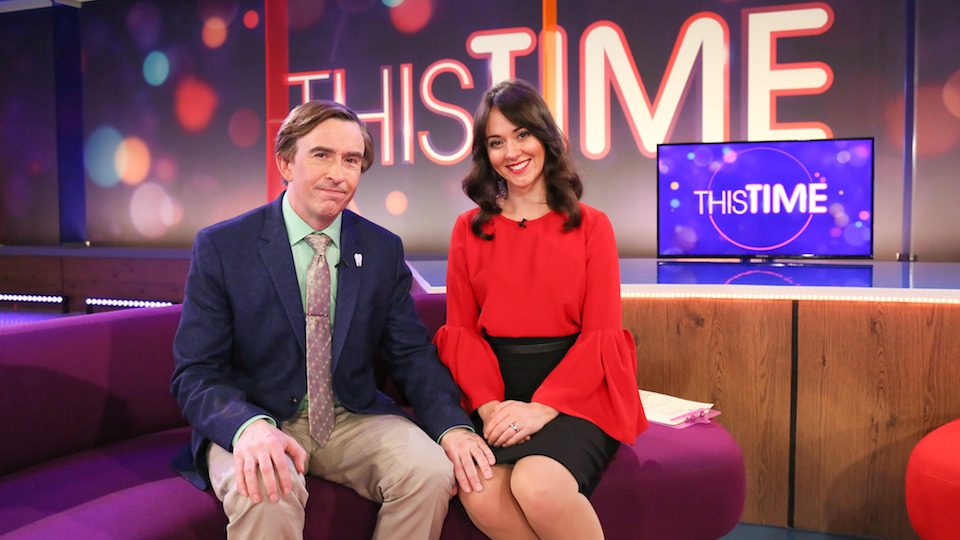 The wait for comedy fans is nearly over, This Time With Alan Partridge has been confirmed to air later this month on BBC One.

Steve Coogan will make his long-anticipated return as hapless presenter Partridge who, the last time he appeared on the BBC with his show Knowing Me, Knowing You, he ended up shooting a guest live on air. Living in our ‘Brexit Britain’ climate, anything is possible but we imagine the fictional deceased Director of Programming, Tony Hayers, must be turning in his grave (if there’s room to beside the TV aerial).

We’re asked to suspend our disbelief that all has been forgiven and Alan’s been trusted to return to the Beeb screens. It’s the result, of course, of a desperate situation. The Beeb have had to call (presumably a long list before they reached Alan) Partridge to act as temporary co-host of This Time. A weeknight prime time magazine show, not dissimilar to The One Show. As such, Alan finds himself seated beside co-presenter (Susannah Fielding) who’s practiced her fake smile ready to tackle, challenge and grimace at any Alan-isms that’ll be broadcast live on air.

We can also reveal that the new episodes will see Alan once again flanked by his long-sufferingly loyal PA Lynn (Felicity Montagu) and even Sidekick Simon (Tim Key) has made his way onto the telly gig as Alan’s, well, er, sidekick. Sort of.

Speaking at a BBC preview screening and Q&A recently about Partridge’s return, Steve Coogan said: ‘What we do is we have him trying to jump on the bandwagon and say, you know, he says ‘Hey! I’ve made mistakes, I’ve stood on the side of the sidewalk and slow hand-clapped while I watch a woman try to parallel park, you know, and I feel bad about that. And now if I saw a woman doing it now, I would shout instructions’.

‘He’s sometimes ignorant and prejudiced but he tries to do the right thing. Early on we made him too predictably conservative a bit like shooting fish in a barrel – a caricature. Whereas now we do him as someone who realises that he’s got to get on message. He’s struggling to do the thing he’s supposed to.’

Advertisement. Scroll to continue reading.
In this article:Alan Partridge, BBC, BBC One, Felicity Montagu, This Time