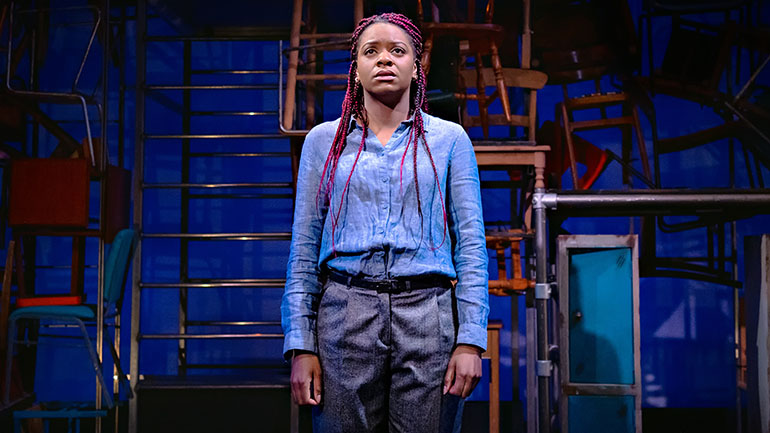 Devastating consequences of an urban tragedy are explored in debbie tucker green’s random — a single-woman show which follows directly after Kes as part of a back-to-back performance in Leeds Playhouse’s Pop-Up Theatre.

The one-handed show stars Kiza Deen as an orator, channeling the voices of a black family in London on what seems to be an ordinary day. The dominant voice is a young woman called back home by her parents. There she learns that her schoolboy brother has been murdered in a ‘random’ attack.

Told through a typhoon of personas and perspectives, random explores the impact of the boy’s death and the process of grief the family must endure as they come to terms with his suffering. It’s a study of bereavement yet it also humanises what the media appears to be normalising, even trivialising, as just another unfortunate statistic.

At times the dialogue is purposefully tricky to follow. These are honest, conversational voices full of colloquialisms and not every ear will be perfectly tuned to each nuance. Yet that’s part of the enveloping, credible quality of debbie tucker green’s writing. The voices are legitimate and feel as authentic as witness testimonies.

But there’s never any doubt as to who’s speaking. Each character is sharply defined and brought to life in a true showcase performance by Kiza Deen, switching from a swaggering lad to a stiff police officer with effortless transition. Deen also hands over genuinely funny moments with charm to sweep the audience into a sense of comfort and normality. It makes the oncoming tragedy all the more sobering.

Partnering Kes in the billing, it’s clear these two shows share more than just a stage. Both unpack anxieties about belonging, identity and empathy whilst signposting catastrophic moments of grief in youth. Both are brutal and fearless in their depiction of violence and distress, whilst capturing an almost documentary realism in their depiction of culture. Both also realise their worlds with the simplest theatrical enhancements.

random is an economic, impassioned solo which rings true at every turn. Full of expressive, legitimate voices and troubling truths, this is one of the most compact and impactful pieces of theatre you’re likely to see this season. It’s also a fresh example of how a single-handed performance can captivate and command its audience. Go see.