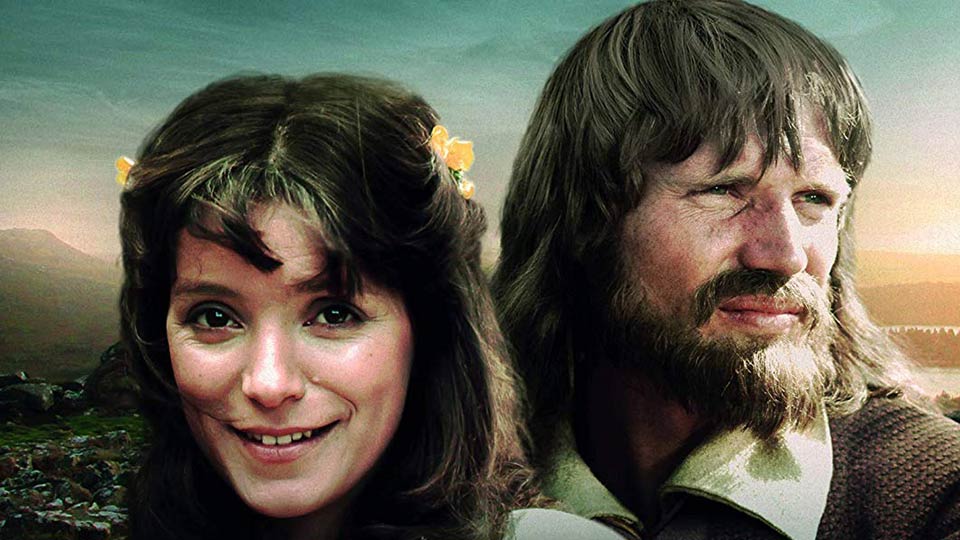 There have been many screen adaptations of RD Blackmore’s swashbuckling, historical adventure story set in the Exmoor of the Seventeenth Century. This one dates from 1976, and was made by the BBC.

In common with most television drama of the era, the production was partly filmed in the studio and partly on location, with the medium alternating between tape and 16mm film accordingly. As such, this Lorna Doone has a theatrical style, in terms of performance and presentation, that may jar with modern sensibilities. However, for those steeped in the golden age of British television, there’s much to enjoy, and the locations are very well-chosen.

Over five almost hour-long episodes, Lorna Doone unfolds with great fidelity towards Blackmore’s original story. The hero is John Ridd, who wants revenge after his father is murdered by the Doone clan. The snag is that he falls in love with the young Lorna Doone – but her heritage may not be all that it seems to be. Key moments of the plot, such as the young John Ridd cutting his feet by dangerously climbing up a waterfall into Doone territory where he meets Lorna for the first time, and his efforts to become the man of the house by learning to use the rifle, are faithfully translated to the screen.

The series is held together by great performances. John Somerville, in perhaps his most high-profile part, has the necessary bravado as John Ridd, and Emily Richard, who was a familiar face on television at the time, captures the wide-eyed innocence of the titular heroine. More high-profile actors in the cast include fine character actor Ian Hogg as the Ridd’s family friend, the highwayman Tom Faggus, and particularly Patrick Troughton as the villainous and manipulative Counsellor Doone, seven years after he had relinquished the role of Doctor Who. It’s interesting to note that the producer of Lorna Doone is Barry Letts, who produced Doctor Who after Troughton left, and who brought him back to the show in 1972. John Turner, later the Hitleresque Spode in the Jeeves and Wooster series of the 1990s, is highly entertaining as the main baddie, Carver Doone.

The slow pacing, obvious wigs and facial hair, and washed-out colours on the film stock are part of the charm of this relatively low-budget adaptation, and the production values lock it into the period in which it was made. But there’s an abundance of talent in the cast and crew. Composer Carl Davis, who had already scored one of the greatest television documentaries – The World at War – and who would go on to enjoy an even more distinguished career, including his music for the 1995 Pride and Prejudice, creates a suitably romantic period score, whilst director Joan Craft, although towards the end of her career, had been behind the camera for numerous classic adaptations of great works of literature.

I suspect that the biggest appeal for this screen outing for Lorna Doone will be the Doctor Who connections, and the substantial supporting role for the ever-popular Patrick Troughton, who was invariably a sign of quality, and whose career was enjoyed by three successive generations of my family, up until his death in 1987. But Lorna Doone stands up well alongside other classic BBC adaptations of the era, and is faithful enough to the original story for those who admire the book.