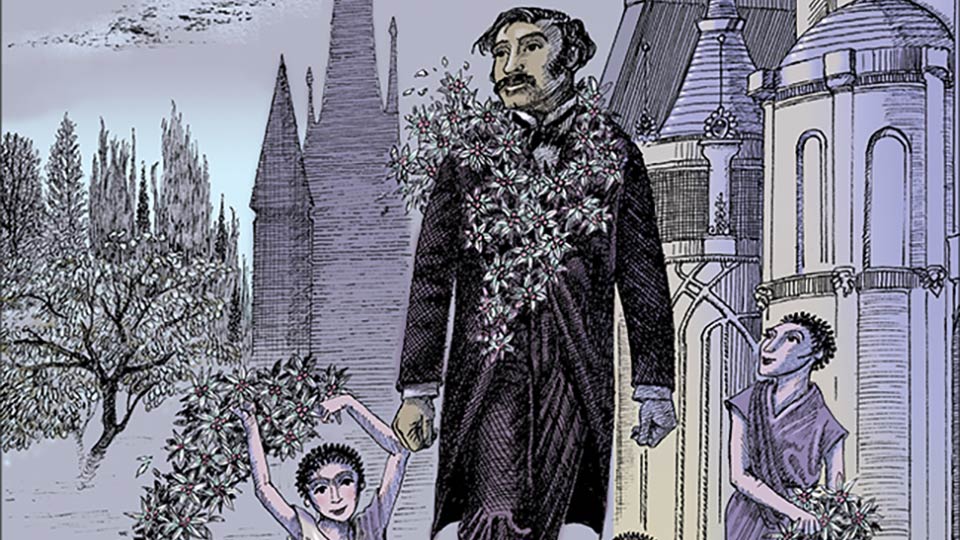 Illustration ©Grahame Baker-Smith from The Folio Society edition of The Time Machine by H.G. Wells.

The Time Machine is undoubtedly a young man’s book. Published in 1895, before HG Wells had yet turned thirty, it is bursting with ideas. An amazing and original high concept lies at its heart; yet youthful exuberance can’t disguise an essential shallowness and nativity.

The Time Machine was HG Wells’ first published novel. It popularised the phrase and invented or expanded many of the tropes familiar to the time travel sub-genre of science-fiction familiar in popular culture to this day. Its pioneering nature alone earns it the attention of serious readers, especially those with an interest in late Victorian popular fiction and the early forays into science-fiction.

The story sees the narrator attend a dinner party where he mixes with distinguished guests from different disciplines. One of them, known only as the Time Traveller, claims to have invented a machine that can travel forwards in time. He relates a story to the other assembled guests about how he has visited a future where the human race has diverged into two sub-species – the tiny and peaceful Eloi who live on the surface of the planet, and the base, violent and subterranean Morlocks. On exploring the local area, and finding the remains of a derelict civilisation, the Time Traveller realises that the Morlocks have stolen his Time Machine – his only means of returning to his own era. He faces a dangerous journey into Morlock territory to retrieve it.

One issue with The Time Machine is that the majority of the prose is taken up with the Time Traveller relaying his story in the first person to his fellow guests. It feels like an extended digression, and as such is unsatisfying. More fundamentally, there’s virtually no characterisation. The reader is offered little clue was to what makes the Time Traveller tick, and the tragic Eloi he befriends, Weena, is poorly sketched, and her demise badly handled, so it’s hard to be emotionally engaged with the action.

Illustration ©Grahame Baker-Smith from The Folio Society edition of The Time Machine by H.G. Wells.

Another weakness is in the political naivety of the premise, which is informed by Wells’ socialist ideals. Although he would later become a more sophisticated thinker, especially about how human civilisation would develop under the march of technology, he remained blinded by socialist dogma even to the extent of meeting and conversing with Stalin at a time when the British left still defended and believed in the Communist project. The binary oppressed/oppressor thinking is reflected in the black and white depiction of the two future human races. There is an absence of credibility in their portrayal because they are at the service of the author’s political point, rather than living and breathing in their own right.

The other novel contained within this release is much more successful, and consequently it remains a rewarding read for modern audiences. The Island of Doctor Moreau appeared only the following year (1896), but Wells’ storytelling techniques and characterisation are immeasurably improved. The clunky framing device has been replaced by straightforward third person narration, and characters are well-developed. The story is told by Edward Prendick, who, after a shipwreck, ends up on an uncharted island which belongs to an eminent physiologist called Doctor Moreau, who is conducting sinister experiments upon animals.

The creepy ideas at the heart of The Island of Doctor Moreau predicted modern concerns about genetic cloning and modification, as well as the warped experiments of ghouls such as Doctor Josef Mengele. Although the plot devices have been used ad infinitum in science-fiction and horror stories ever since, Wells was certainly a pioneer. As well as scoring highly on originality, the author also retains an unsettling atmosphere and a suggestion of lurking menace throughout the book, keeping the pages highly entertaining. In virtually every respect, The Island of Doctor Moreau has aged much better than The Time Machine.

The illustrations, as is frequently the case with The Folio Society editions, add greatly to the overall aesthetic appeal of the book, though they only appear among the pages of The Time Machine. The cover, which is embossed in gold, neatly captures the late Victorian period, and the relatively large print and classic font are also fine period details, making this double feature an attractive item for ardent admirers of HG Wells. If you’ve always meant to dip into the classic works of the enduringly popular author, then his first two science-fiction books are a great place to start.

The Folio Society edition of The Time Machine and The Island of Doctor Moreau by H.G. Wells, introduced by Michael Moorcock and illustrated by Grahame Baker-Smith, is available exclusively from The Folio Society.

Advertisement. Scroll to continue reading.
In this article:HG Wells, The Folio Society, The Island of Doctor Moreau, The Time Machine