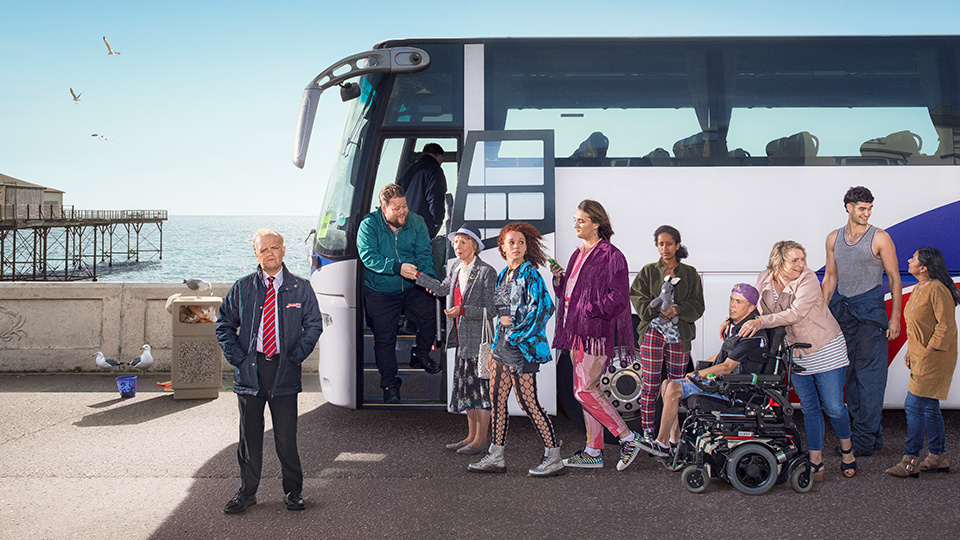 It explores what it means to live, work and parent at a point when the entire UK population is having to come to terms with the changing colour of their passports.
Toby Jones plays Peter Green, who is at full stretch just about coping with his disaffected daughter Kayla, played by Erin Kellyman, (bored to a state of almost total inertia in a place that has nothing for her) and Joy (Marcia Warren), his mum, whose life is rapidly descending into confusion and fear. The discovery of a dead body on the docile Bognor shoreline and an unsettling meeting with a new arrival in town throws Green’s life into chaos – a lost soul in need of assistance, who he could help. But will he? Can he?

Co-creators Toby Jones and Tim Crouch said: “Don’t Forget The Driver is a love-song to Bognor. It’s filmed with care, attention and a warm, gentle wit. The series is about a moment when a seemingly small life interacts with the wider world. Bognor sits on the edge of England – facing out towards Europe. The modern world has arrived and yet Bognor still has the unmistakeable air of a seaside town holding onto its traditional values. It’s like two rivers joining – a sometimes mis-remembered past and an unknown future. Bognor has become a good place to explore many of the themes of national identity that are gripping our country. When we were filming, we were very lucky with the weather as well – Bognor really put on a show for us and we hope viewers love it as much as we do.”

Don’t Forget The Driver follows a group of people struggling with their place in the world, their own sense of identity, and reveals how, in one single moment, even in the most ordinary of lives, an accidental encounter can change the course of everything.

The air date for Don’t Forget the Driver hasn’t been announced yet but we’ll let you know as soon as we know!

In this article:BBC Two, Don't Forget the Driver, Toby Jones