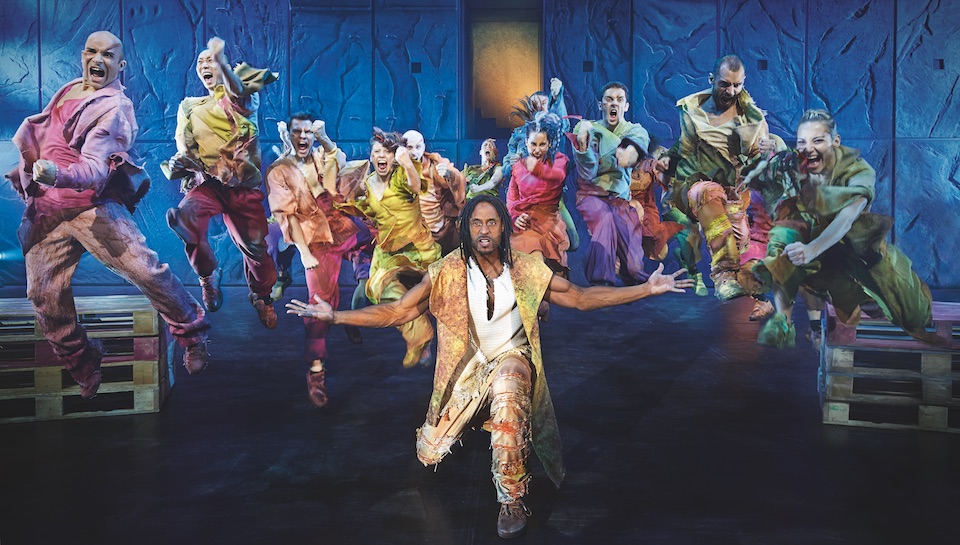 It’s not a name you’ll soon forget. Victor Hugo. One of the biggest inspirations for two of the most globally recognised musicals. But whilst Les Miserables has been a sensation in the UK, well received by audiences both on stage and screen, sadly Notre Dame de Paris pales in comparison. Its first run in London’s West End in 2000 was short-lived and, despite its run in more than 20 countries, its return to the UK is as brief as before. With only seven shows scheduled at the Coliseum, and with its high walls, grand ceiling and golden embellishments it’s the perfect home for it. Regal and elegant, I was hopeful that the performance will live up to the height of my expectations.

With the first clash of cymbals, the first ring of drums I get instant goosebumps. Gringoire (Richard Charest) setting the scene, giant gargoyles appearing behind him, dancers who look tiny in comparison roll about the floor. It’s a lot to take in and that is the very first problem. There’s a lot going on. Too much even. From the cast jumping and flipping, whilst others abseil down walls or climb over gargoyles, the eye doesn’t know where to look. That is if you’re not busy reading the surtitles above or to the side of where the action is taking place. But with all this action I can’t help but feel each performer is screaming, “Look at me!” People are whooping and cheering at their tricks and that’s fine – but it doesn’t fit.

This is supposed to be a show about love, lust, longing and I don’t feel it at all. Where is Frollo’s madness? Where is his battle between duty and desire? He sings about it just fine, but I don’t believe it. Even when Phoebus darts about the stage despairing over the two woman who love him (oh woe is him) the only madness is the men dancing, for some reason in their pants, behind him. Totally bizarre and I guess to represent his inner demons battling but it doesn’t really make much sense.

Don’t get me wrong. The performers are doing their job. They are putting on a show. But what they’re lacking is the ability to really get to the heart of the story. Maybe that’s just because I didn’t pay much attention in my French lessons so only understand the odd word like Belle and Cathedrale, but it seems the whole essence has been lost in translation. Craning my neck to read surtitles and actually missing the storytelling happening on stage is not my idea of a great show. I should be able to understand universally through their every movement and gesture. Sadly, I don’t. It’s a shame too because the movements on stage are big and bold. Which is actually not always a good thing. It’s too much. The lights, the sets, the ghastly gargoyle literally dancing around the stage. It feels clownish and daft. It feels too big, too colourful, there’s just not enough of the raw emotion that we should be experiencing.

It doesn’t feel like it’s found its place. Is it show or is it story? Is it concert or is it musical? It needs to pick one and not try to be everything all at once. Notre Dame is a monument – world renowned, grand and historic. A show that bares its name should be just as bold and epic, which to some extent this show is but not for the right reason. The bells of Notre Dame are famous and grand, it’s a shame that this show does not do it justice.