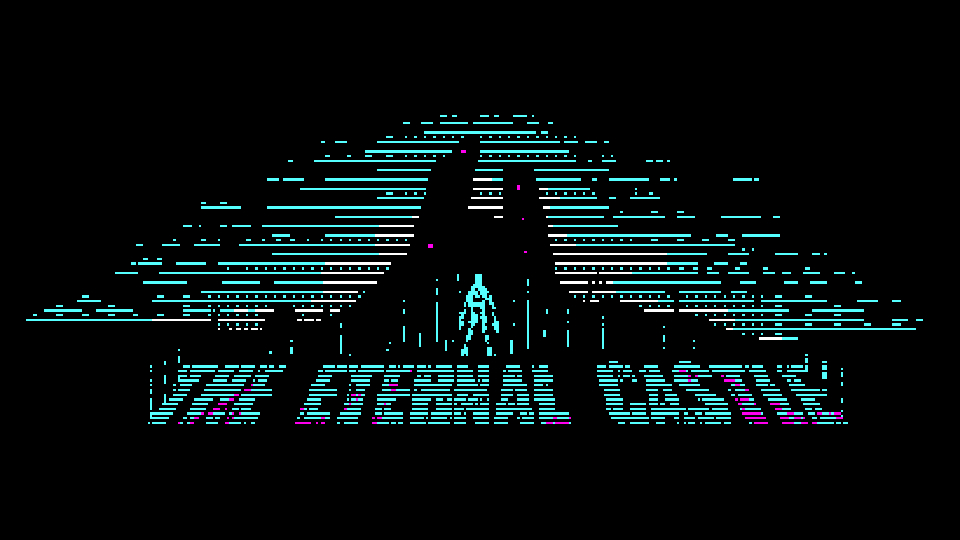 The Eternal Castle [REMASTERED] is a completely immersive retro experience that sets the bar high. With only context clues to go off of, the story quickly forms around a post A.I. fallout world. Riddled with vicious corrupted humans and a landscape of destruction and decay that flies feast from, The Eternal Castle pulls no punches in setting the stage for powerful trudge through. Based on the lost “Eternal Castle” from 1987, nothing has been spared bringing the vision to life as authentically as possible–spanning across the whole package: gameplay, sound and graphics.

The first and most unavoidable quality that anyone might notice about The Eternal Castle is the bold and unapologetic usage of 2-bit colour CGA animated graphics. What is amazing about the distinctive CGA colour palette is something that I tend to cherish in older games: developers finding ways to tell the story with limited resources at their hands. Magnificent and unforgettable results have come from these sorts of technical limitations. Most notably, the famous fog that blankets the cursed town of Silent Hill was born from a graphical issue that Team Silent was forced to work with in the Playstation Era. As you walk through The Eternal Castle, you’ll be left entranced with how just a few pixels and limited colour can convey a whole scene of death, misery and vastness.

The sound design is very clever and often very intimidating to take a journey through. Utilised at all the right moments, you’ll hear oppressing tracks with a hint of futuristic feel to them as something previously unassuming suddenly pops to life with the sole purpose of destroying you. It’s immersive, and in turn, often very eerie. The mixture of the post apocalyptic setting and bold soundtrack will make you lose yourself in this limited coloured world.

The gameplay is a mixture of puzzles, platforming and combat as you side scroll your way through each screen. Embodied with the inertia-filled run that games such as Another World (1991) capitalize on, you’ll have to judge your movements carefully. Striking a fine point between cautious and quick, it will be something to get used to, but something you come out on the other side appreciating very much, especially if this isn’t the first time playing with classic inertia-based movement.

View some screenshots from The Eternal Castle [REMASTERED] in our gallery:

Running across any other body in The Eternal Castle is a dangerous game of ‘friend or foe’. Everyone emanates a creepy vibe, and after getting ran up on by the first few ruthless characters with guns, you’ll forever be suspicious approaching anyone. Combat can be a tricky beast, especially if you’re not used to the controls. Having to use everything at your disposal movement-wise is not really a choice, but a necessity. You’ll have to be able to roll to dodge attacks, and frequently use the cover that environments provide. Doing anything else results in an overwhelming demise–you must be tactical to survive.

The Eternal Castle is a masterpiece. It’s something that only comes along once in a while and could be mistaken for the real deal instead of just a ‘remaster’. It’s challenging, rewarding, completely pulls you in, and will leave you marvelling. Everything about it from start to finish screams authenticity, bringing a game from times past to a new generation without sacrificing anything from the old.

The Eternal Castle [REMASTERED] was reviewed using a digital code supplied by the publisher.