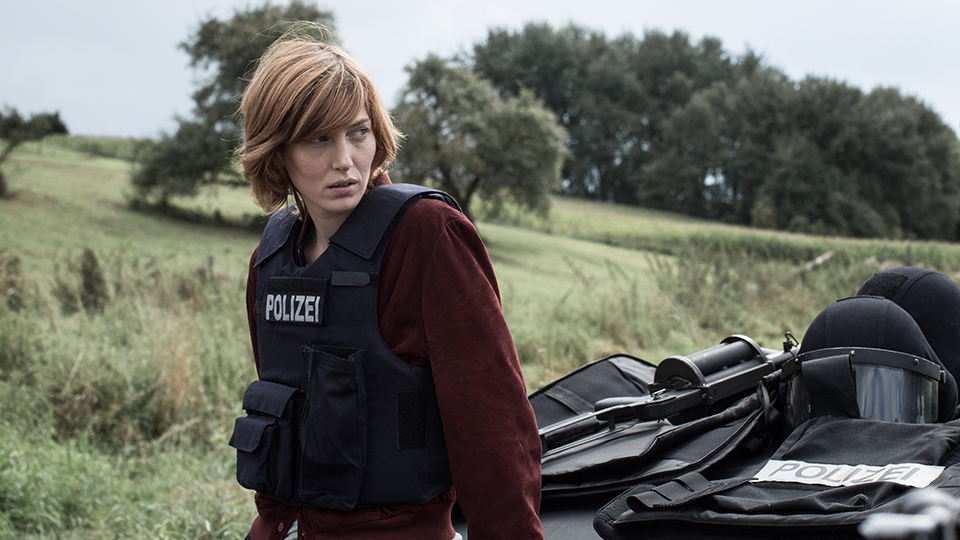 Set on the French-German border, The Crimson Rivers (Les rivières pourpres in its original French language) is a 12-part thriller from the Luc Besson production house, EuropaCorp, and German company, Maze Pictures. It’s a true European release, scripted in French, shot in Belgium, with a French, German and Austrian cast, and broadcast by France Télévisions in France and ZDF in Germany.

If you want to avoid all spoilers, we suggest you stop reading this article right now.

Like another Luc Besson feature that’s been adapted for TV – NBC made two seasons of Besson’s hugely successful Taken franchise before cancelling it last year – The Crimson Rivers is based on a 2000 French thriller starring Jean Reno and Vincent Cassel, and a novel by Jean-Christophe Grange.

Shot in beautiful forest scenery, the action starts with a hunt held by the wealthy German family, the von Geyersbergs. This is a traditional affair that sees the family and their jodhpur-clad friends ride to a forest on the French side of the border (because, we learn, fox-hunting is banned in Germany). However, during the course of the hunt, two riders become separated from the main pack and end up stumbling over the corpse of one of the von Geyersberg family. He’s naked, decapitated and horribly mutilated.

Because the forest in located in France, it falls under the jurisdiction of Camille Delauney and Pierre Niémans from the newly formed OCCS – the central office for violent crime. Delauney (played by Erika Sainte – she played Fanny in Baron Noir) is the younger protégé of steady old-hand, Niémans (Olivier Marchal – he was in the excellent 2006 feature film, Tell No One – from the Harlan Coben novel of the same name).

The two French officers are clearly chalk and cheese (craie et le fromage?). Delauney is very much a heart-on-her-sleeve copper, scathing of the advantaged von Geyersberg family, disliking their privileged lifestyle and hunting of innocent animals. She’s clearly the headstrong, impetuous one. In a scene in the opening episode, whilst driving to interview a witness, she makes sexual advances to her German colleague, quite literally mounting him as he’s driving down the road. Please don’t try this yourselves – I can’t begin to count how many traffic violations it breaks!

Niémans by contrast is a far more sure-footed character, more considered and methodical in his approach. But even he’s not impervious to the charms of the opposite sex as he’s clearly attracted to the sister of the victim, Laura – a sultry, moody character played by the wonderfully named Nora von Waldstätten (she was in Murder By The Lake and is a member of the Austrian noble family, the Barons of Waldstätten).

The opening episode has a good pace to it; despite the gore of the decapitated body (and another grizzly scene at the very end to tempt us into episode two), it’s actually rather gentle in its approach. The scenery is stunning, and the chemistry between the two leading players is pleasing and fun to watch. It is a little formulaic, perhaps – but there’s enough intrigue to suggest further viewing is worthwhile.

The Crimson Rivers will air weekly on More4 from Friday 11th January at 9pm.