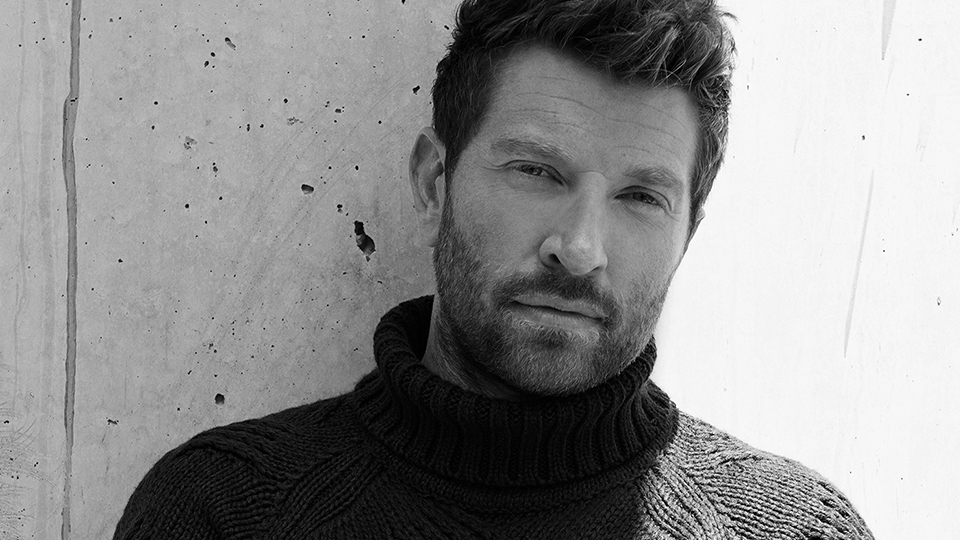 Brett Eldredge is making a welcome return to the UK in March to perform on the Main Stage at C2C: Country to Country.

Three years since his last trip, when he made his live UK debut at KOKO in Camden, Eldredge will be the penultimate act on the stage before headliner Keith Urban. The singer-songwriter recently released a deluxe edition of his holiday album Glow featuring several new tracks.

Known by fans for his fantastic voice, Eldredge has also become the King of social media thanks to his partner in crime Edgar, his lovable dog that travels everywhere with him.

I caught up with Brett to talk about his long-awaited return to the UK, discuss his plans for his new album, and to find out more about the deluxe edition of Glow.

Let’s start with the most important question… how is Edgar?

He’s in full-on holiday spirit. This time of year he likes getting out in the cold and it gets me outside. I’m enjoying having him around like always. He’s a good way to start my day and end my day everyday. He just puts a smile on my face. It’s good to have a road dog with you all the time.

I’m obsessed with following his adventures on social media. He goes everywhere with you doesn’t he?

(laughs) He’s with me a lot of the places I go man. Most of the time if he’s not with me he’s hanging out with the family or something, when it’s too far for him to fly. He’s almost always at my side.

The deluxe edition of your holiday album Glow was released recently. Why did you decide to add some more tracks to it and release a new version?

There was a conversation that came up about what I was going to do for my next Christmas record and the Glow record had just took off in a big way the past two years. I didn’t want to end this ride or this album yet. I want it to be, and to continue to be, a part of family traditions in their holidays. It’s just a really special record so I was like, ‘let’s add another half of an album and go record more songs and add them to Glow Deluxe’. We went in and I went back to New York City and lived there for the whole week in the middle of May. It just ended up being another magical experience to make an even bigger and better version of Glow. I was ready keep this ride going with Glow and to see it once again doing what it’s done is pretty special so I’m excited.

It’s such a great Christmas record. It’s so hard to get a Christmas record right and you’ve made it seem effortless. Have you been surprised by the reaction and the passion for the album?

I love classic Christmas. I think a lot of people do because of the nostalgia… your grandparents listened to it or your parents listened to it. It’s a part of nostalgia, it’s a part of all of us. It’s a magical moment in music with Christmas music. Some of the last magic in the world is in holiday music, I swear, I’ve always had a connection with it. I wanted to do it in a classic way. I grew up singing this stuff and love the big band sound and the classic sound. I knew that if I was honest and real, I knew it would be believable and it was a whole other side to me that I needed to get out there. I was hoping everybody would latch onto it well and they did just that in such a big way that I was just blown away by it. I was somewhat surprised but I knew that you just got to go in there, and whatever you do just go all the way in and be you and be honest, and I think everybody will know it’s coming straight from your heart. That’s what my favourite artists do and that’s what I try to do and somehow it works (laughs).

I remember seeing you at KOKO in 2016 when you came to London and you sang a Frank Sinatra song. I thought then that you really should do that kind of big band album and that’s what you’ve done with Glow. Is the big band sound something that you may explore further in the future?

Yeah I think someday. Country music is my home and that’s what got me going but the big band sound is a big part of who I am. I’ll be sitting in my rocking chair one day looking back kicking myself if I never make one of those records so I think I will at some point. I’ve already done it with this Christmas record and I see it somewhere in the future but yeah I’m not afraid of it at all. I think it would be a lot of fun but right now I haven’t put anything in the works yet.

You’re coming back to the UK in March for C2C and people are very happy about that. It’s been a while so are you excited to come back?

I’m so excited. I’ve been trying to figure out how we can get back for a while. Everything is going really, really well over here to the point where I was like, ‘I don’t care what we got to do, we’ve got to get back over to the UK and Europe’. I got the call for C2C, which I’ve been wanting to do for a while and also to play with Keith Urban who I toured with not once but twice in my career and is a big mentor of mine… I was just so excited with this opportunity and get back over there. I just love it over there. I am so excited! I’m going to spend a lot of time over there and really get into the culture and get inspired also from all the fans and make some music and all sorts stuff so I can’t wait.

I’m sure you’ve heard a lot about C2C as it’s a pretty big deal for us Country fans here in the UK. Are you prepared for what to expect?

Everybody talks about it over here. It’s a big thing. I’m so excited about that.

Oh yes. That is my goal to do that very soon. I know that we’re going to have some awesome shows at C2C and I think that’s a precursor for more to come. I definitely have that in the plans as well at some point.

Let’s talk about your next studio album. Have you started working on it yet?

Yeah. Once the holidays are over I’ll really be focusing on that album. I’m going to go in and dive deep in a cave of music, and disappear for a bit. I feel in a really good spot right now in my life and my career where I’m setting my bar high to go make something that is extra special and very powerful and very deep and meaningful. I feel like I have that in my heart and in the songwriting. I’ve already started to write for it. I feel very inspired to make something really, really special that I feel will be a big part of my career on the next record. I’m starting in the process now and over the next few months I’ll be very heavily writing for it and recording for it and getting ready. It’s an exciting time to be able to have a blank slate. I’m fortunate enough to have three successful records under my belt… I guess four if you count the Christmas record too. Everything feels really good and it gives you the courage. The way I know my fans and they know me I feel like I can me and be really honest on this next record, not that I haven’t, but I get more comfortable and more comfortable to just set myself free on this record and I think it’s going to be something really powerful.

What I’ve always loved about you is that you always do something completely different and you catch us completely off guard like with Somethin’ I’m Good At, which was completely unexpected. You explore your sound and you really push those boundaries. As an artist do you enjoy seeing where you can take your sound and what the reaction to that is like?

Yeah absolutely. I don’t ever want to be, and I challenge myself not to be, somebody that does the same thing over and over. I think (with) artistry you continue to grow and you try things that might not be exactly what everybody else is doing but I guess that’s part being an artist, that makes you you. For me it’s kind of stepping off the ledge a little bit and saying this might not be the popular thing at first because it’s way different and someone doesn’t know how to react to it but that’s what makes you you and that’s what makes you an artist. Man, I can sleep easier at night and I can feel better about everything if I really go out there and just push that bar for myself and for my fans. That’s what I try to do every day and I’m going to do it this next record.

As we’ve discussed you’ll be here in 2019 and you’ll be working on a new album. How are your plans in the US shaping? Will you be jumping onto any tours in the new year?

We haven’t announced anything for next year yet other than I’m heading your way in March. I’ll have some summer festivals and then after that it’s focusing on making a record and who knows what else will come? Everything is going a hundred miles an hour and I also want to take the time to make an extremely special record for this next album. I’m going to try not to rush through everything always and sacrifice artistry. I want to have that time to really pour my heart out on an album so I’m going to do that as well.

You keep spreading that word. That’s something I want to try to do. If I have my way right, that’s what I would like.

Oh wow! You keep spreading the word for me like you have, and i appreciate it, and we’ll be there in no time.

Will you get some downtime over the holidays to relax and see family and friends?

Yeah. I just back from being with my family for Thanksgiving. I go home for the holidays, for Christmas usually. I like to start my year on an island or somewhere I’ve never been… be around a culture that I’ve never been, something that completely take me out of my regular comfort zone and experience something new so it re-inspires me. I think that’s going to be the perfect time to do that for writing for this next record. I’ll hit the holidays up with family and then take a little breather and then hopefully writing the record of my lifetime.

Well when you come over here in March, we’ll be waiting for you with a pint…

I will gladly accept that that my friend (laughs).

The deluxe edition of Brett Eldredge’s holiday album Glow is available now. Brett will perform as part of C2C: Country to Country at The O2 Arena in London on Friday 8th March 2019. For tickets head over to https://c2c-countrytocountry.com/.