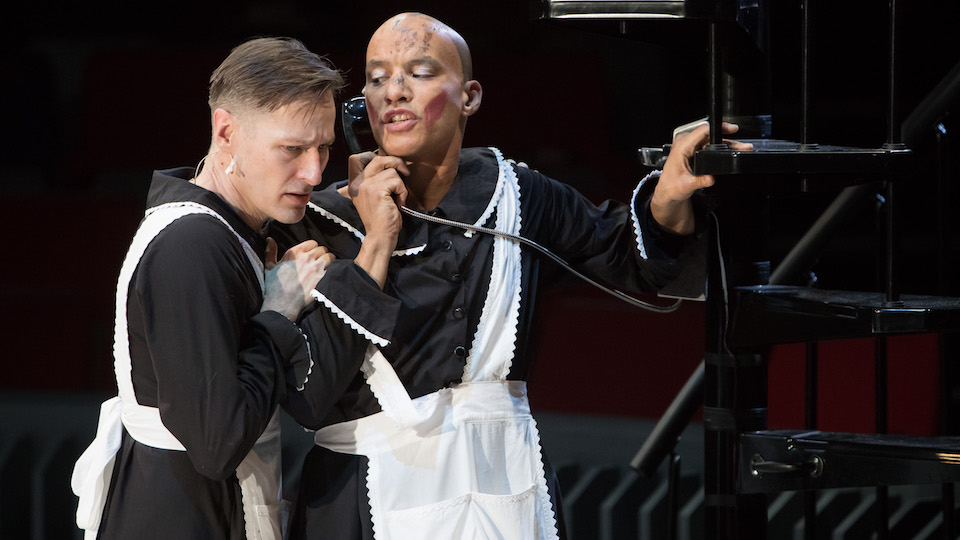 Jean Genet’s infamous mid-20th-century play The Maids is being retold for two weeks at Manchester’s HOME theatre. The Maids follows two sisters who inhabit and are the maids of an impressive French household. When their master, ‘the Mistress’ is out of the house, they play out their fantasies of how they would prepare for her murder, taking it in turns to role play as the Mistress (who eventually arrives, bringing her own share of reverie). This is a production which asks the audience to continually re-question what is real: one of sliding power balances and more questions than answers.

Director Lily Sykes has cast three male actors in a play about three female characters. This is an interesting decision which adds more tension to the existing uncertainties in the script – one more level of masquerade. The whole cast is highly accomplished, however the stand out performance is Danny Lee Wynter as the mistress: you’re not watching a man playing a woman, you’re watching a woman.

The Maids opens (after an improvised ‘kooky actors get too close to the audience’ routine that most of us have seen, or felt, before) with a well-embedded and provocative use of a live video feed. This sets the precedent for a visceral and immediate performance to stand side-by-side with the progressive and experimental new plays of 2018, but unfortunately it never quite lives up to that promise:

The official promo for this production says that it ‘explodes with modern ideas about sexual and political outcasts’. I’m afraid to say that this is hyperbole. Other than the gender-reversed (and ethnically-separate) sisters, the script still feels very much of its time (1947). It’s very dense, very wordy, and despite some more tender moments, very shouty. Add to that the ambiguity of all the twisting back-and-forths, and you’ve got a play which is, to be frank, quite exhausting to watch.