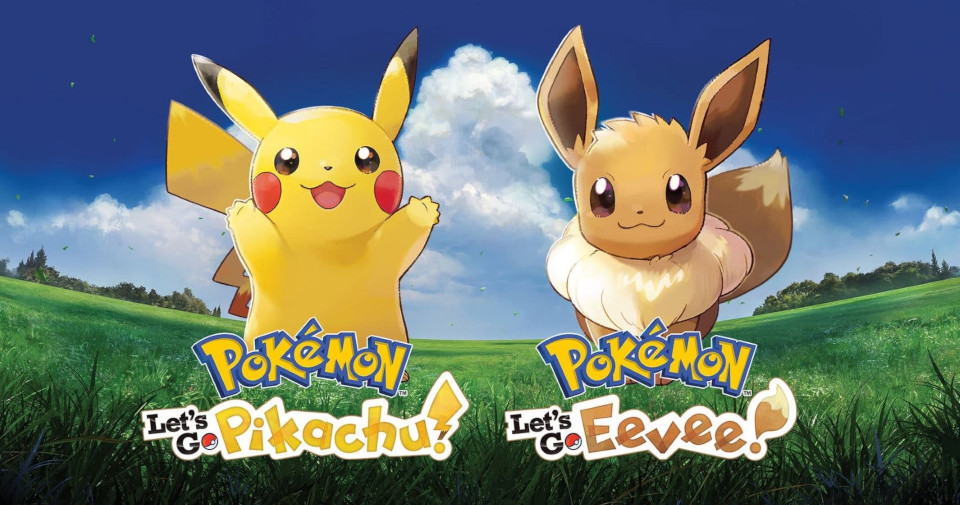 Nintendo can’t seem to let their little creatures rest can they? With over 120 games released, it’s no surprise the Switch feels empty without one. Sure we have Pokken tournament but that’s as close to a Pokémon game as I am a decent human being. This year, we are treated to Pokémon: Let’s Go Pikachu and Eevee, (We ran out of gemstones already, Game Freak?) a remake of the original games; Red, Blue and Yellow.

It’s time to come out from underneath your rock while I explain Pokémon to you. You play as a 10 year old boy or girl and at this age you are sent out into the world to become a Pokémon master. Pokémon are animals that can do magic and your job is to catch these critters, stuff them into a Poké ball and keep them in your bag forever. Sometimes they might get a little lippy, so you’ll have to make them fight each-other. You’re probably thinking “What parent would do this?”, and you’re right, except the parent isn’t there. You are alone, enslaving and destroying nature as you roam the world. Okay, I might be thinking a little too much into it, so imagine that but it’s cute and fun!

You can view the official Pokémon: Let’s Go trailer below:

Being a remake of the first titles (Specifically, Pokémon Yellow), Let’s Go has a tough job following the plot of the first game. There really isn’t anything deep here and comparing it to RPGs that came out at the same time, Pokémon was lagging behind. While Game Freak has improved over time and delivered interesting stories, the original games didn’t.

Fortunately that’s not what Pokémon is about. The first game offered 151 Pokémon to collect and a simple, rock-paper-scissors, battle system. This hasn’t changed throughout the series. Go out into the wild and catch the Pokémon, take them into battle where fire beats water etc. and improve as you go. Your Pokémon can go from level 1 to 100 and some even have various forms. This leaves plenty to do and catching them and defeating everyone on the way is immense fun.

Where does Let’s Go differ then? Well not a lot to be honest, but let me explain why that isn’t such a bad thing. As per its announcement and title I was very worried this would be a port of the mobile title, Pokémon Go. While that isn’t exactly a bad thing either, it’s just not good enough for a Switch port. Thankfully, Game Freak have stuck to a mostly traditional title.

I say mostly traditional because there is a controversial “addition” here and that’s how wild Pokémon are handled. In the previous titles you had to fight the wild Pokémon to bring them onto your team. In Let’s Go, this boils down to just catching the wild Pokémon. It’s a disappointing change but it’s easy to see why. This title is made for newcomers and younger audiences and to be honest, it works fine. Battling other would be Pokémon Masters is just like before, find their weakness and destroy them. The core of the problem is that the game is just far too easy. Using the titular Pokémon (In my case, Eevee), you are nigh on unbeatable and to give yourself a challenge, you have to shelve your main Pokémon. Again, the reason for the decision is obvious so it’s hard to complain.

Visually, the game is a pixel by pixel remake of the original Game Boy titles. It’s nostalgic to run through the environments and hear the music reinvented. The colour space is used very nicely and there are some little specular highlights throughout to give it a nice sheen. During battles there is some nice animation and lighting and the effects of the Pokémon’s powers is used very well. Putting it next to Super Mario Odyssey or Breath of the Wild is unfair but overall it looks good.

Resolution-wise, we are looking at 1080p when docked and 720p when portable and outside of a small downgrade in resolution there is complete visual parity between the 2. Frame-rate wise, the portable version can have slowdown but it’s really not often enough to cause issue, leaving a very solid 30fps. Character models of both humans and Pokémon have a nice 2.5D effect to them that ooze personality and Let’s Go even throws in some small cutscenes to expand on the story. This doesn’t revolutionise the game but it adds a little more flavour and removes an issue in the original where you could get lost as to where to go. These scenes are very brief and they give an extra focus on Jessie and James, popular characters from the TV show.

There are a lot of quality of life upgrades here that make things far easier for newcomers. First is the Pokémon Box. In the original titles these were at set points in the game and allowed you to have access to all your Pokémon as opposed to your team of 6. This time around you have access to that at all times, it’s handy but removes the joy of coming across one throughout the story. EXP is shared amongst all of your party as well, something that was tied to an item before. Again, this removes the challenge as you can level up fairly fast, overpowering enemies with no way of slowing down. Also, in the previous titles there were abilities called HMs. These powers allowed traveling to previous locations, swimming in water and more. They were tied to specific Pokémon and could only be used with your current party of 6, yet in Let’s Go they can be used at any time. All these changes are fine and understandable given the nature of this title but for those looking for a little more depth, I’m sorry to say, it isn’t here.

A little note to Nintendo, only 1 save slot? Still? On the plus side, one big change is the fact Pokémon now appear on the overworld, allowing you to pick and choose your fights. I hope this is a standard moving forward as running into the same Pokémon 20 times in a row isn’t fun. In Pokémon Yellow, you were followed around by Pikachu and in Let’s Go you are followed around by either Pikachu or Eevee, but also you can bring out a second Pokémon. It was quite a nice change and makes you feel like you are on an adventure. As per usual, trading over the internet is here as well as battling and you can even transfer your Pokémon from Pokémon Go, provided they are of the original 151 roster.

Control-wise, you use the Joy-Cons when docked using its motion sensor to throw your Pokeball and catch wild Pokémon. I say Joy-Cons but really I just mean Joy-Con, there are so few buttons to press you only need the one. No Pro Controller support is an odd choice that hopefully will come in a future patch. While portable you can play with the Joy-Cons docked and use the gyroscope to aim, it’s more accurate than using the Joy-Cons when the tablet is docked as they can track poorly. There is an additional peripheral called the Poké Ball Plus, which you can use while docked or undocked. It allows for very accurate throws and even contains the legendary Pokémon Mew, being one of the only ways to obtain it. The downside to the Poké Ball Plus is the analogue stick is very difficult to use and requires a lot of moving the ball around to find the right angle. For a £50 device, that’s frustrating, but as usual, Nintendo have built it beautifully.

Summarising the game is tough. Those into Pokémon already have it and no matter what I say are loving it. For younger players, you can expect a low effort RPG with cute characters and pleasant colours, you can even play local co-op making it very easy for families to get involved. But would I recommend that over other Switch titles with local co-op? Probably not, to be honest, this title is quite long and repetitive while there are short and sweet titles aplenty on the Switch. What about those who have never touched a game in the series? Expect a very easy game based on collecting and simple RPG mechanics. It’s a very popular series so the online community will be permanent but even still, if you have a 3DS there are better Pokémon titles and better RPG games on the Switch. If you’re adamant you need it, you won’t come away hating it because it’s far from bad, it’s just very plain.

As a series veteran, I love it but if I had never played it before, I think I’d come away just liking it. Nintendo have released this at a strange time, they have a fully fledged, Breath of the Wild style Pokémon game out next year that looks to reinvent the series but to release this as, potentially, the first game people may play is an odd choice. There are small improvements that could be made and I could easily see this being a yearly or bi-yearly project which is great, as the games get more in-depth as they go. And remember it’s not about children going out to strange places alone, to make animals fight to the point they collapse…it’s not!

Pokémon: Let’s Go was reviewed using a retail copy bought by the author.

Check out our Pokémon: Let’s Go gallery below: