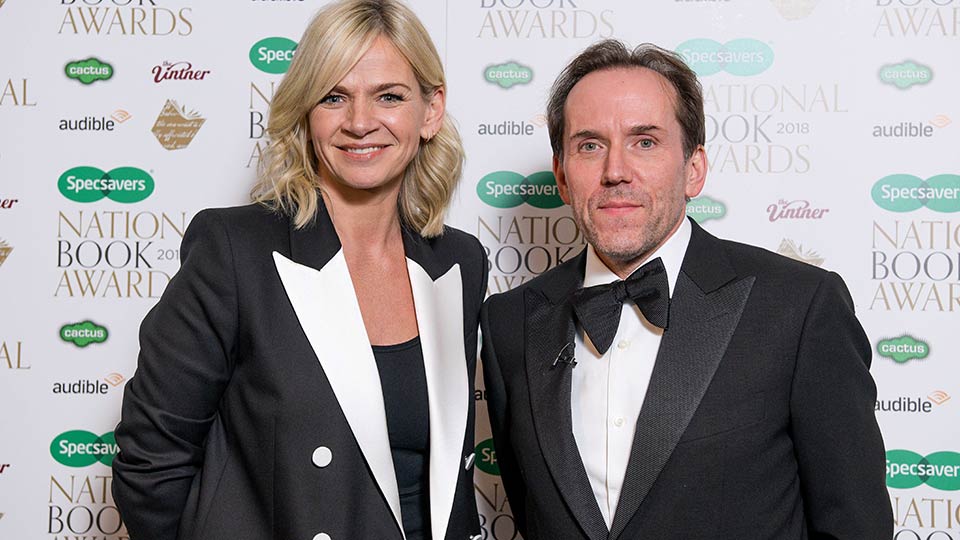 The literary talent of Britain’s most loved authors was celebrated at this year’s Specsavers National Book Awards 2018, with Philip Pullman, Dolly Alderton, Benedict Cumberbatch and Yotam Ottolenghi amongst those to walk away with awards at the glamorous event.

In a dazzling evening hosted by Zoe Ball with Ben Miller at The Royal Institution of Great Britain, London, the nation’s most popular writers went head-to-head at a ceremony attended by stars of the publishing world. Philip Pullman took home UK Author of the Year for The Book of Dust, while Dolly Alderton’s Everything I Know About Love won Autobiography of the Year. The Food & Drink category was topped by Yotam Ottolenghi, and best-seller This is Going to Hurt scooped three awards. Benedict Cumberbatch won Best Audiobook of the Year for his reading of Carlo Rovelli’s book The Order of Time.

A host of other stars attended on the night, including Jamie Oliver, actress Emilia Fox and presenter Graham Norton. Comedian Ricky Gervais was there to support his partner Jane Fallon who was nominated for Best Popular Fiction Book of the Year. The winners were chosen by the National Book Awards Academy, a panel of industry experts including retailers, publishers, agents, authors, reviewers and influencers. Highlights of the awards will be aired on ITV during Christmas specials of Zoe Ball on Saturday/Sunday on 22nd and 23rd December.

Gail Honeyman won the Specsavers Popular Fiction Book of the Year with Eleanor Oliphant is Completely Fine. Taking the top spot ahead of Stephen Fry’s Mythos and Graham Norton’s A Keeper, Honeyman said: “I’d just like to say what an honour it is to be shortlisted among so many amazing books.”

For the Autobiography of the Year, winner Dolly Alderton said: “I am so shocked, wow, thank you!”

Triple-winner Adam Kay was awarded both Audible New Writer of the Year and Popular Non-Fiction Book of the Year with his incredibly topical and popular book This is Going to Hurt. Jonathan Ross made a surprise appearance to present Adam’s third award, the Zoe Ball Book Club favourite voted by the viewers.

Belinda Bauer’s Snap beat hot competition from Robert Galbraith/JK Rowling, Ian Rankin and Val McDermid to be named top Crime/Thriller Book of the Year. Stories for Boys Who Dare to be Different by Ben Brooks and illustrated by Quinton Winter topped the Children’s Book of the Year category ahead of tough competition from David Baddiel, Rachel Bright, Anna James, Chris Riddell and Robin Stevens.

The LBC Audiobook of the Year went to Benedict Cumberbatch for his reading of Carlo Rovelli’s book The Order of Time. The International Author of the Year was taken by Sally Rooney for her highly acclaimed novel Normal People, while the Young Adult Book of the Year award went to Scarlett Curtis with her book of essays Feminists Don’t Wear Pink.

Amanda Ross, managing director of Cactus TV who produced the awards, said: “We’re delighted that the National Book Awards are back this year to celebrate the best books of the year. Congratulations to all our shortlisted authors. All the books on our shortlist make the perfect Christmas gifts for the whole family, there’s something for everyone in every genre.”

Readers can also now vote for their favourite of the 2018 award winners to crown one with the of title The Specsavers Book of the Year. Votes can be registered at National Book Awards and the winner will be announced on Sunday 30th December. Highlights of the awards will be aired on ITV during Christmas specials of Zoe Ball on Saturday/Sunday on 22nd and 23rd December.