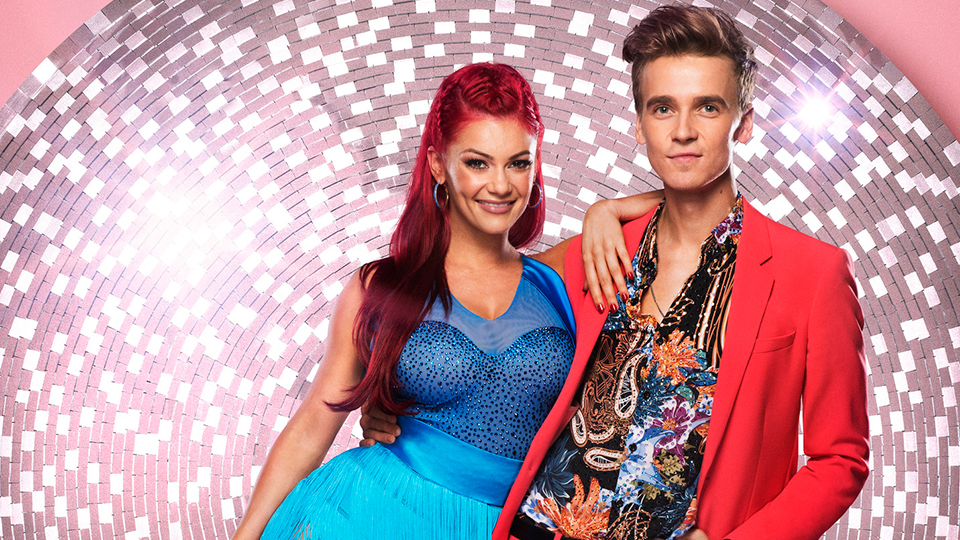 Strictly Come Dancing relocated to the Tower Ballroom in Blackpool last night as the 8 remaining couples danced to keep their place in the competition.

With bigger productions, more elaborate routines and even more pressure, the couples pulled out all the stops to climb their way up the leaderboard last night. The show also featured a standout opening performance from the legendary Gloria Estefan.

This week Stacey took on the Salsa to Gina G’s Ooh Ah (Just A Little Bit). In training Stacey spoke about the amount going on in the routine and her desire to not hold back, whilst she and Kevin went on a night out in Blackpool with the rest of the Strictly cast.

The dance: Stacey opened the dance by descending from the Tower Ballroom ceiling astride a giant stick of rock, before launching into the routine proper. She had good hip action, great energy and it looked like she was really enjoying herself in her Latin for the first time. Some of the tricks such as the neck drop and one of the lifts didn’t quite come off, but the spectacular backwards lift towards the end finished the routine on a high and she definitely got the party started.

The comments: Shirley praised the lifts and the rhythm in Stacey’s body, but wanted her to concentrate on details like closing her feet. Bruno said it was wild and wonderful and loved how Stacey let her hair down, comparing it to a Kylie Minogue concert. Craig told Stacey to be aware of her legs in the lifts as it was quite haphazard, but thought she had fantastic hip action. Darcey said it was fun and exciting from beginning to end and Stacey’s personality filled the ballroom.

After achieving their highest score of the competition last week, could Lauren and AJ do it again with their Argentine Tango to River by Bishop Briggs? In training Lauren spoke about how much she enjoyed last week’s performance and her surprise at getting nines, as well as wanting to convey the details of the dance in the huge Blackpool ballroom. She and AJ also went diving with sharks to get in the spirit of their underwater-themed routine.

The dance: I really liked this dance from Lauren. She had fantastic control throughout and brought a great intensity and passion to the performance, and the chemistry between her and AJ was electric. I also thought she coped with the majority of the lifts very well, although the final one was a little clunky. The only thing I would have liked would have been more sharp, staccato kicks, but overall it was another great performance from her.

The comments: Bruno loved Lauren’s determination and intent, but wanted more fluidity and intimacy. Craig felt Lauren was getting stuck between each step and wanted her to loosen her legs and lengthen her lines. Darcey praised Lauren’s extraordinary focus on the technique but said the chemistry and passion was missing and wanted more purpose in her movements. Shirley thought the mood was too similar throughout and it needed more details.

After surviving the dance-off last week, Graeme and Oti became the latest pair to perform a Couple’s Choice routine, choosing the Theatre/Jazz style for their dance to The Trolley Song from Meet Me In St Louis. In training Graeme spoke about his cricket career and rediscovering the buzz he felt whilst playing through Strictly. Choreographer Bill Deamon also came in to help him and Oti with their routine.

The dance: In their VT Oti said she thought this could be Graeme’s best dance, and I think she was right. It was light, bright and lively, with great synchronisation from Graeme and bags of personality. He acted it really well and had a smile on his face throughout, and I thought he hit the musical accents and delivered the lifts. A fun and entertaining routine that was utterly joyful to watch.

The comments: Craig didn’t feel Graeme led the dance and called his lines ‘childlike’, but praised his storytelling and commitment. Darcey, however, said it was charming and cheeky and Graeme’s timing was immaculate. Shirley was impressed with how Graeme held his own with the professionals, whilst Bruno thought the character was fantastic and Graeme has improved a lot.

Pasos at Blackpool have become something of a Strictly tradition, and this week it was Faye and Giovanni’s turn with their routine to Unstoppable by E.S. Posthumus. In training Faye spoke about how much she’d enjoyed last week’s Jive, as well as the need to focus on her hand movements and the dynamism of the dance.

The dance: This was an intense, dramatic routine, with sharp foot movements from Faye and great drive across the dancefloor. She coped well with the lifts, leaps and extra dancers and it was great to see her fiery side come through. Sometimes I felt she was down in her knees a bit much and I’d have liked a little bit more shape in her body, but overall this was another strong performance that should see her through to next week.

The comments: Darcey loved Faye’s balance between attack and femininity and praised her shaping and control. Shirley thought it was brilliant, singling out Faye’s chassis cape for praise. Bruno said the dynamics and structure were superb. Craig loved the drama, theatre and story.

This week Kate and Aljaz danced an American Smooth to Love Affair’s Everlasting Love. In training Kate spoke about how much fun she’d had dancing their wedding-themed Quickstep last week and how excited she was for Blackpool, but also struggled with the lifts in the routine and trying to improve her posture. Aljaz also took her to the top of Blackpool Tower to hoist the Strictly flag.

The dance: Kate and Aljaz arrived for their routine by heart-shaped hot air balloon before getting into hold. I think Ballroom is definitely Kate’s strength and this was another good routine for her – she glided across the floor and her posture has improved a lot even in just a week. Her transitions in and out of the lifts were smooth. she had good synchronisation with Aljaz, and her smile throughout was infectious. A lovely uplifting routine that showed how she’s going from strength to strength.

The comments: Shirley called her ‘Kate the Consistent’ and said her timing was impeccable, but wanted her to increase her stride. Bruno said it was ‘blissfully smooth’ and had a wonderful lightness. Craig thought it lacked energy at the start and the transitions were slightly graceless, but loved seeing Kate growing into the choreography and concept. Darcey thought it was classy and sustained but that Kate lacked confidence in the lifts.

Charles’ Strictly journey has had more ups and downs than The Big One rollercoaster, so how would he and Karen fare with their pool party-themed Samba to La Bamba by Connie Francis? In training Charles spoke about the pressure and emotion of last week’s routine, whilst Karen took him to Blackpool Pleasure Beach.

The dance: Charles oozed confidence and swagger, had excellent bounce and hip action, a great free hand and excellent energy throughout. It’s great to see him going for it and getting into the spirit of the dance, particularly in the group section, and he gave a thoroughly entertaining performance. He’s definitely hit his stride and if he keeps this up he could well be an outside chance for the final.

The comments: Bruno said Charles was indistinguishable from the professionals and made it look easy. Craig really liked it, whilst Darcey praised Charles’ confidence, flow and undulating body action. Shirley thought Charles commanded the dance, calling it ‘fantastic’, and said she felt like she was in Brazil.

Joe has frequently spoken about wanting to dance at Blackpool in tribute to his grandparents, and this week he and Dianne finally took to the Tower Ballroom to perform a Quickstep to Dancin’ Fool from Copacabana. In training Joe spoke about how happy he was to have reached his goal and being excited about dancing the Quickstep, whilst his nan and family watched as he rehearsed.

The dance: Looking dapper in white tie and tails, Joe had great flair in his solo opening before getting into hold with Dianne. He was incredibly light on his feet and practically flew across the floor, with great posture and rise and fall. The section on the piano was slick and sharp, he had great synchronisation in the pendulum move, and I loved his showmanship throughout. He’s blossoming into a brilliant Ballroom dancer and I already can’t wait to see what he does next week.

The comments: Craig wanted Joe to broaden his lines out of hold and make the space bigger, but in hold he’s a dark horse and full of surprises. Darcey called it a ‘grand’ performance and said there were images of Fred Astaire all the way through, praising Joe’s ‘perfect’ frame and top line. Shirley liked Joe’s sway and footwork, and thought it was ‘oustanding’. Bruno loved the style and gloss, as well as Joe’s skill in mirroring the professional couples.

Ashley has been consistently topping the leaderboard with a score of 39 for the past few weeks. Could she and Pasha hit the magic 40 with their Jive to The Blues Brothers’ Shake Ya Tail Feather? In training Ashley spoke about how much she loved her Couples’ Choice routine but struggled to cope with the routine, whilst she and Pasha served up fish and chips to paying customers to get in character for their routine.

The dance: Is there anything Ashley can’t do?! She and Pasha had fantastic synchronisation from the off, whilst her kicks and flicks were sharp and precise. Her performance had tons of sass, some dizzying spins, plenty of drive and great energy, and she coped well with the tricks too (particularly having the tablecloth whipped out from under her!). It was a full-on performance that was fun from beginning to end and has certainly cemented her as the one to beat this year.

The comments: Darcey loved Ashley’s energy and attitude, whilst Shirley liked that she pushed the envelope with her kick ball changes in particular. Bruno said there was nothing fishy about Ashley’s performance and thought it would become part of Strictly history. Craig simply said it was ‘fab-u-lous’.

Strictly Come Dancing 2018 continues tonight at 7.20pm on BBC One. Take a look at all the couples in rehearsal yesterday in our gallery below…