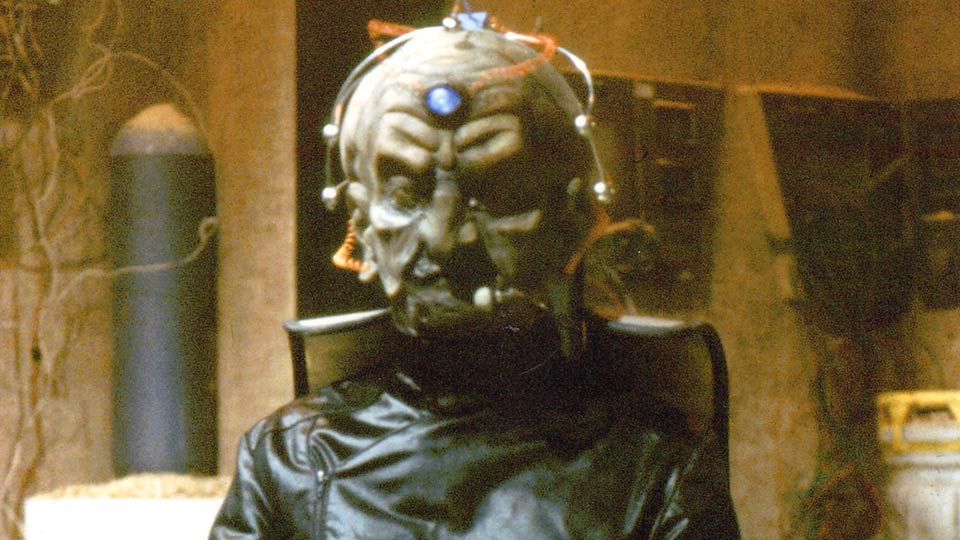 For anyone who loves the original 1963-89 run of Doctor Who, the Myth Makers interviews now being released in collections by Koch Media are essential viewing. They provide in-depth insights into the lives and reminiscences of the actors and crew members who worked on the beloved science-fiction show.

The Doctors: Villains! brings together over 2 DVDs a collection of six features with five actors who made a significant mark on the series playing one of the Doctor’s adversaries. The five interviews on this release were made between 2006 and this year.

Two of the actors, Ian Collier and Bernard Archard, died in 2008, and Peter Miles sadly passed away earlier this year. Also included is the 1997 tribute to the late Roger Delgado, who died in 1973, so in many ways these collections honour the legacy of many fine actors and preserve for future generations of fans their personal tales about the making of their Doctor Who stories. Each instalment lasts between 45 minutes to an hour, providing fans with over five hours of Doctor Who magic.

In common with the usual format of these releases, there is an introduction by the two men who made the series, Nicholas Briggs and Keith Barnfather, whose easy rapport is always fun to watch, and they summarise for viewers the delights in store.

The first feature is a tribute to Roger Delgado, the original Master, who was tragically killed in a car accident in the days before fandom had set about documenting the actors’ stories or organising a convention circuit. Delgado has, therefore, always been a mysterious, charismatic figure, fondly remembered for his immaculate, chilling performance opposite the Third Doctor. Here, reminiscences are cut from many separate interviews, including from actors Nicholas Courtney, Jon Pertwee, John Levene and Richard Franklin as well as producer Barry Letts, director Paul Bernard, head of serials Shaun Sutton and writer Terrance Dicks. Although cut together from multiple sources, including two different interviews with Pertwee (he recounts the same story about Delgado’s bravery in both!), it’s a warm, affectionate tribute to a fantastic talent who is rightly lauded as the definitive Master. The incidental music adds greatly to the sombre but loving atmosphere, and Nicholas Briggs’ linking narration at a circus, in tribute to Delgado’s debut in Terror of the Autons, is a nice touch. Poignant viewing, and a good second-hand insight into what Roger Delgado’s colleagues thought of him.

The second feature catches up with Ian Collier at his home (there’s even a clothes maiden hanging up in a few shots). He was the second actor to play Omega in the Peter Davison serial Arc of Infinity in 1983, for the show’s twentieth anniversary (having previously appeared alongside Jon Pertwee, though not as a villain, in The Time Monster). Collier reflects on his whole career, including his work for Big Finish, and talks with great honesty about the HIV diagnosis and how it negatively impacted upon his later work. Only two years later, he would be gone, which adds a great deal of poignancy to this interview.

The final instalment on the first disc features Bernard Archard, who played a secondary villain in the missing Patrick Troughton classic Power of the Daleks, and later made an even bigger impact in the classic Tom Baker serial Pyramids of Mars as the possessed Marcus Scarman. A lovely British character actor with a distinctive face and credits as long as your arm, Archard had plenty of tales to tell. This feature includes footage from an interview (alongside Geoffrey Bayldon) at a Doctor Who convention in 2006, as well as at his home during the same year. He died, aged 91, in 2008.

The second disc opens with a brand new feature with David Gooderson, the second actor to play Davros, the creator of the Daleks, in the 1979 Tom Baker serial Destiny of the Daleks. It opens with interviewer Robert Dick at the location Winspit Quarry, suggesting Gooderson will be along in a moment, but the actual interview takes place at the actor’s house. Dick speaks to him for an hour and brings out some wonderful stories from a great actor and writer, including his childhood in India and his career highlights outside of Who, such as his role playing the pathologist in A Touch of Frost, and the 1980s Blackpool-based series Seaview.

The Dalek-theme continues with an interview with Peter Miles, who sadly died in February 2018. The team catch up with him in 2006, shortly after appearing in the stage play The Trial of Davros. Although he was in Doctor Who several times, including two memorable adventures with Jon Pertwee, Miles is most fondly remembered as the villainous Nyder, Davros’ right-hand man, a kind of Heinrich Himmler type, in Genesis of the Daleks. In real life, Miles is much more affable, and talks about his childhood, breaking into acting and roles in Doctor Who. He gives a few anecdotes about the luminaries he’s worked with, including Brian Blessed and comes across as a real actor’s actor! It ends with a recording of his other performance passion – signing jazz standards.

The final feature on this release is with Julian Glover, who had appeared with William Hartnell in The Crusade (as King Richard I) and later with Tom Baker as Scaroth in the 1979 classic City of Death. Easily the best-known and most-revered actor among those featured here, Glover has played baddies in the Star Wars, Indiana Jones and James Bond franchises, and also enjoyed a highly revered stage career. Speaking in 2006, he talks to Nicholas Briggs one-on-one, and is also filmed at a convention. Glover modestly recalls his time at RADA and gives his views on the acting profession in general, including an interesting anecdote about how a comment by Laurence Olivier made him refocus his career.

Overall, this is another fantastic compilation from Koch Media of the Myth Makers interviews that stands alongside their earlier releases, such as Monsters!, Blake’s 7, The Hartnell Years, The Jon Pertwee Years and the Tom Baker Years. As some of the actors featured here didn’t play the best-known villains, this collection is probably a little more niche than some of the earlier titles. But there are plenty of great tales about the theatrical profession and about working on Doctor Who that fans will adore, and it is an essential addition to any collector’s catalogue to the other Doctor Who titles from Koch Media’s range. For first-hand glimpses into the making of Doctor Who and the talent involved, you can’t beat The Doctors: Villains! or any of their other Doctor Who-related offerings.