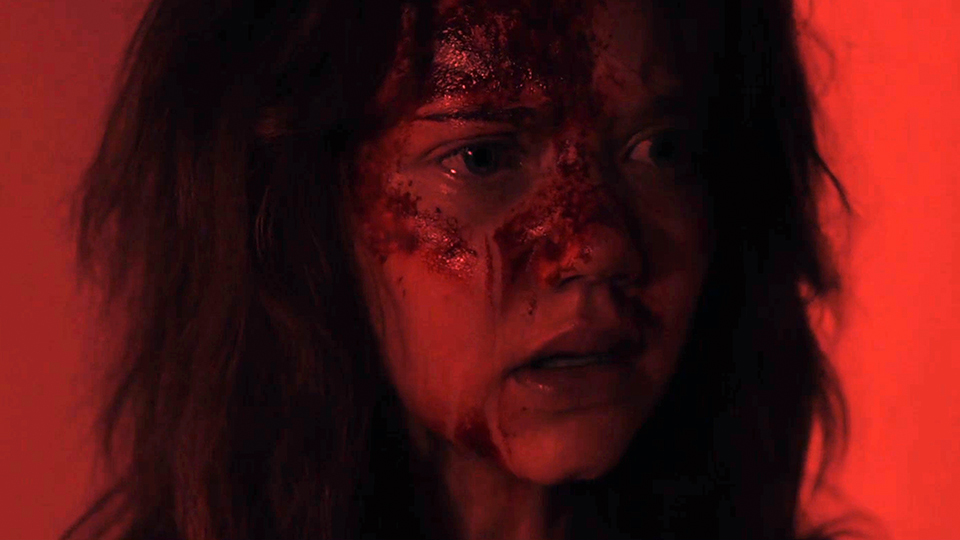 A stillborn baby is brought back to life by electrokinetic power and found by morgue attendant Ken Stern (Chaz Bono), who takes her home. After keeping her captive for 16 years, and promising to reveal who her birth mother is, Ken tries to sexually assault the teenager now known as Tess (Kayleigh Gilbert) but she manages to escape. Determined to find her birth mother, Tess’ path leads her to actress Lena O’Neill (Barbara Crampton) and she deceives her way into her life to get to know her. As the two grow closer, Tess harnesses her electrokinetic power to exact revenge on anyone who crosses her or her mother.

Reborn had its World Premiere at Arrow Video FrightFest Halloween 2018 today. Director Julian Richards was unable to attend due to illness but the eager crowd were ready to get stuck into the slate of films on offer for the day. Starring horror genre favourite Barbara Crampton, Reborn is a cross between Carrie and Firestarter that ticks off plenty of well-known tropes. The opening 15 minutes are fairly intense and disturbing as morgue worker Ken is revealed to be a pretty despicable character, and certainly not someone who should be bringing up a child.

The film aims to shock you from the beginning and it’s fairly effective but it does lose its effectiveness as it progresses. Once Tess is out in the world and looking for her mother, we see Lena’s side of the story. She’s painted as a woman who never dealt with the death of her child, something which has impacted every part of her life since. She’s on the outs with her agent, holding acting classes in her house to get by, and seeing a therapist in the hope that she can finally work through her issues.

Tess meanwhile is following a trail of clues to find out who her mother is and you wait with anticipating for the inevitable to happen. It’s at this point the film loses its way a little. It’s established from the outset that Tess has electrokinetic powers and the characters she comes into touch with make some seriously stupid decisions. One example is when she confronts the doctor who delivered her. Despite the fact the electricity is flickering on and off during his confrontation with Tess, he jumps into an elevator and well… you can guess what happens next. There were several times during the film, particularly in the last half hour, where the audience was in hysterics and I’m pretty sure that wasn’t the intention.

Kayleigh Gilbert, who plays Tess, is actually very good in the role. She plays kooky very well and she’s pretty intense throughout. She resists going over the top, something she could have so easily done, and her performance is one of the best things about the film. Crampton is as reliable as always and she gives a compelling performance. Her scenes with Gilbert are the film’s strongest moments.

Reborn is an enjoyable but not wholly original horror film. If the horror factor had been upped a little and it had managed to avoid some of the usual clichés, it would have been a much better film. A tighter script may have reduced the laughter that came from the audience too. Reborn is a solid if unremarkable movie that should have done more to make its own mark on the genre, rather than borrow from similar films.