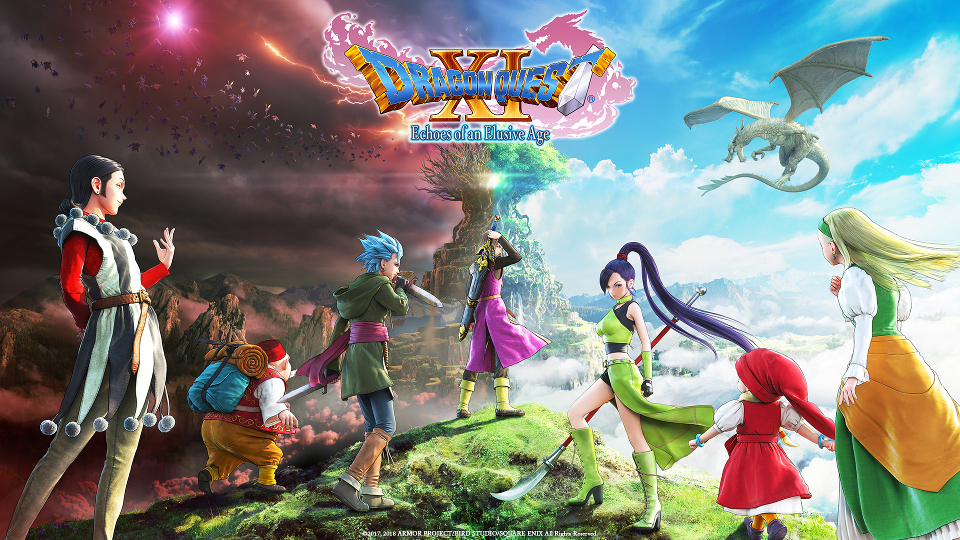 I usually pride myself on trying not to give too much away in the introduction to my reviews but in this case I can only say three words.

I grew up reading the stories of Akira Toriyama in the Shonen Jump manga series so when I had the opportunity to play and review a game with the master himself in charge of the art I jumped at the chance. I pictured grand adventures, engaging characters, amazing aesthetics and a completely engaging experience; on all of these points I was treated to a game that surpassed my expectations.
We are all familiar with the Final Fantasy series, however, what many people (myself included) did not know was that Dragon’s Quest as a game series was the precursor to all such games. This series has been around for years and years but has not gained much traction outside of Japan. Many people have put this down to the success of other RPG games and the localisation of the Dragon’s Quest series; many of the myths and legends and much of the dialogue only has the desired effect on someone with some background knowledge of Japanese culture, history and society. Unfortunately, when it comes to this particular barometer, most of us stay very close to the bottom.

As soon as you pick up this game you are transported not only into a different world, but also back in time. The control which many people will find clunky and primitive, at least in the beginning, immediately took me right back to my childhood, playing the slew of games of this kind that pervaded the PlayStation, from Final Fantasy VII to Jade Cocoon and everything in between. As you progress through the game however you will find that far from being a negative, the control system allows you to build on your knowledge and experience perfectly. Throughout the evolution of your team you will learn new ways to craft, new mechanics and more options all of which sit with supreme ease on the control set up. The crafting system that is introduced as you go through the game is also excellent; the requirement of precise skill, timing and control to achieve the best results is an innovative addition to this kind of game and was something that I really enjoyed.

This brings us on to the characters and storyline. I will, as ever, endeavour not to give too much away in terms of storyline, not just because I don’t want to put off players but also because I know that the creative team pride themselves on the surprises, twists and turns and narrative tangents throughout their video games. To discuss this with any level of detail would be to give away for too much of the intrigue. It’s a bit like when you’ve seen the Usual Suspects; once you know the ending, the plot seems so much less engaging.

You take the role of the land’s hero, The Luminary, travelling across a fantasy land to prevent the coming darkness. This in itself is pretty standard fare for an RPG but what sets Dragon’s Quest apart from its competitors is the depth of character given to each of your companions. I know that Final Fantasy games in recent years have sought to add depth to their characters but personally, I felt that Dragons’ Quest went above and beyond in this respect. Whether it’s the frustrated angst of Veronica, or the showmanship of Sylvando or the wizened and world weary Rab, the player is treated to a cast as deep as one would expect from such an accomplished storyteller. All of the characters play their part throughout the twists and turns of the game, all of them has a reason for being there and something important to give. That’s what sets this apart from other games in the field; there are no throwaway characters. Even the random characters you meet as you follow your path have something interesting to say and something original to offer. I really felt a part of this group, it genuinely felt like a journey I was taking with them, a journey across beautiful lands to an epic conclusion.

View some Dragon Quest XI screenshots in our gallery:

This brings me on to the graphics and sound. Dragons’ Quest looks incredible. It treads a wonderful line between a cartoon and a ‘true to life’ game. The colours are bright, the scenes are lavishly decorative and the detailing on each and every landmark, building or natural feature is stunning. The character animation in both cut scenes and gameplay is smooth, and the battles are stunningly rendered. This is all complimented perfectly by a musical score which is as perfect as I have encountered in a video game. The rise and fall of each individual piece of music perfectly complements the action taking place. It’s a big honour for me to admit this but I haven’t seen such an excellent combination of visuals and music since I first saw The Lord of The Rings at the cinema and experienced the compositions of Howard Shore. Bravo Koichi Sugiyama.

The one negative that I have to mention with this game is the sometimes overly linear way in which it takes you through the storyline. The world is so fantastically designed and built that it would have been nice to have a more open world feel to the overall experience. There are times when you have to build up your experience points and improve your team which is standard fare for RPGs but I just felt in these cases it would have been nice to be able to explore more freely. This is an issue with many RPGs but somehow I felt this more keenly in Dragons’ Quest XI though of course that may just have been due to my expectations being raised unrealistically high by the overall quality.

Overall, Dragons Quest XI is a must play. If you can’t buy a copy, borrow one. If you can’t borrow one…I don’t know, watch a play through on Twitch or YouTube. Just get involved! This is one of those games that deserves to be recognised as console defining. It has everything you could want from an RPG and is easily a match for any other title in the genre. I have endeavoured not to give away anything of the plot here because not only would it ruin the game for you all, but it would have meant this review topped out at about 10,000 words. The twists and turns that the storyline takes are amazing, heartfelt, emotive and engaging. The characters are perfectly written and performed by some fantastic voice actors. The world is gorgeous and the music is simply brilliant. I guess that sums it up really.

Dragon Quest XI: Echoes of an Elusive Age was reviewed using a digital code supplied by the publisher.