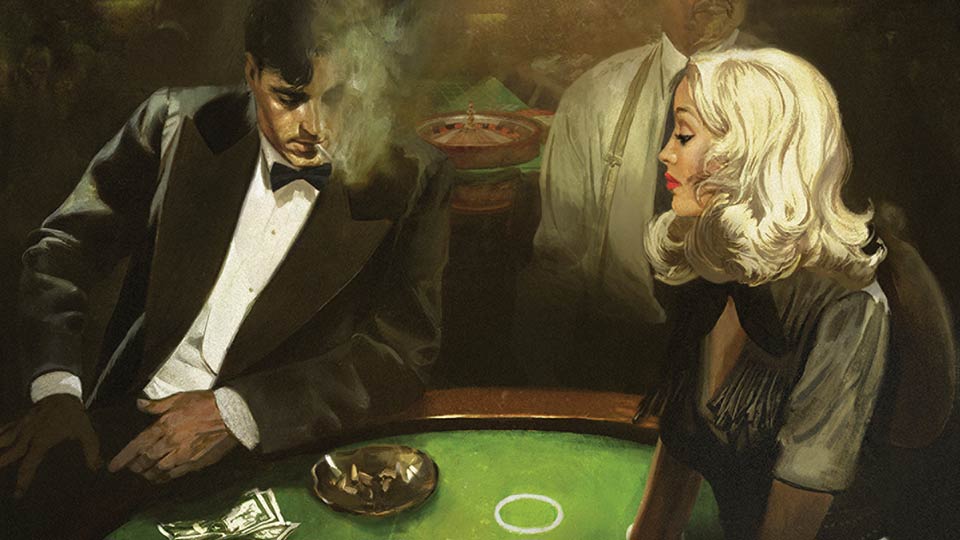 Diamonds Are Forever is the fourth James Bond adventure to be penned by Ian Fleming. It was originally published in 1956, and is the latest title to be given The Folio Society treatment and published as part of their ongoing collection of the cult classic espionage thrillers.

Following Casino Royale, Dr. No, Moonraker, From Russia With Love and Goldfinger, the latest title Diamonds Are Forever is also illustrated by Fay Dalton and comes packaged in black case, with gunsmoke grey hardback cover, making it a very attractive book and an ideal collector’s item.

James Bond is sent to New York to go undercover and investigate a diamond smuggling racket that is operating via a corrupt dentist in Sierra Leone. His mission is to discover the identity of the ringleaders and put a stop to their nefarious operation. One of the gang is a sophisticated young woman called Tiffany Case, whose loyalty to her paymasters is tested by Bond’s charms, especially after they run into one another again at a casino in Las Vegas run by the chief smugglers.

Diamonds Are Forever is packed to the rafters with classic James Bond motifs. He uses golf as the cover story for his stay in America. He attends a horse race where he hooks up with his old CIA buddy Felix Leiter. Bond encounters a rigged table at a casino – this time in his favour – and plays on legitimately to win bigger. In seducing Tiffany Case, he has to use as much guile as he employs for succeeding in his mission.

Yet in spite of the familiar tropes that pepper the pages, Fleming can be commended for trying something different with his fourth James Bond outing. There is no reference to the Cold War, which so often forms the backdrop of Bond’s adventures. Here, Bond doesn’t face fellow spies working for the Soviets on the other side of the Iron Curtain, but grubby plain-old-avaricious diamond smugglers. They are gangsters, sure, but their actions don’t threaten the security of a nation. Faced with a very different kind of adversary, Bond’s familiar tricks of espionage aren’t needed, leaving this book sitting more comfortably in the thriller rather than spy fiction genre.

Fleming uses all the tricks of his trade as a fine and prolific writer to dazzle his reader. The descriptions are economical yet lively. The words sparkle some six decades after they were written. And yet, there is, unlike the previous three novels in the Bond canon to this point, a feeling that the plot isn’t wholly compelling. Perhaps it’s the absence of a single main villain. Seraffimo Spang is an enjoyable creation, but he doesn’t have a life outside of the story in the way that Goldfinger, or even Dr. No, do. This lack of focus in the antagonists isn’t helped by a plot that sprawls (over relatively few pages) across London, Sierra Leone, New York and Las Vegas. Although the style is bewitching, the substance is wanting. Readers of any sophistication will know that the plot is essentially over once Bond makes his escape from the villain’s lair, yet the novel goes on for another five chapters to add a romantic coda in which Tiffany explains the backstory of the smuggling operation. Taken as a whole and on its merits, Diamonds Are Forever is the weakest James Bond outing up until this point.

Having said that, there is plenty to enjoy beyond Fleming’s effervescent prose. Well ahead of the curve, Fleming would often write homosexual characters into his stories, and here we have the delightfully comic villainous duo of Wint and Kidd, who are one of the few story elements to survive intact to the (dreadful, it has to be said) big screen outing that followed in 1971. There’s also a brilliantly-described western episode at Spang’s lair, which is called – wait for it! – Spectreville. For the sheer spirit of adventure, Diamonds Are Forever is a cracking read, and Fleming demonstrates again that he is a master storyteller. The reservation is that, in its structure, Diamonds Are Forever doesn’t quite live up to the Bond stories that preceded it.

As with the previous editions of James Bond novels released by The Folio Society, Diamonds Are Forever is beautifully brought to life by seven full-colour paintings on glossy paper by Fay Dalton. They magnificently evoke the 1950s period of the story, but also capture different moods in the prose. You’ll find a dramatic night-time helicopter flyover, Leiter driving a smoking Bond in a convertible Studebaker, the drama of the horse race, and, of course the three aspects you’d expect from any Bond novel – the casino table, the showdown with the villain, and two of the Bond girl. The slipcase is embossed with a further painting – Bond drinking vodka martini at the Las Vegas hotel bar. Perfect!