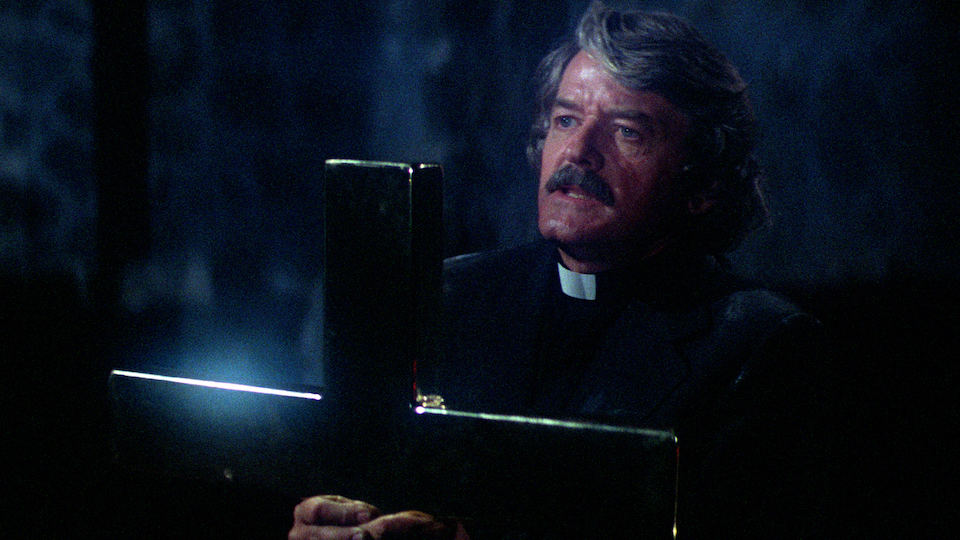 The past comes back to haunt the picturesque seaside town of Antonio Bay, in John Carpenter’s The Fog, his follow up to Halloween (1978), the genre defining smash hit slasher. The Fog might not illicit as many terror-filled screams as Michael Myers inflicted on the citizens of Haddonfield in 1978, but this spooky, atmospheric yarn has enough supernatural scares to keep your blood nicely chilled. Now presented in a stunning 4K restoration – both theatrically and on a sumptuous 4-disc special edition – this is a good time to venture once more into The Fog.

Along with The Thing and Halloween, The Fog is one of the films that firmly established Carpenter’s distinctive visual style and clockwork approach to horror. This is lean and slick filmmaking, without an ounce of fat or time being wasted on subtlety. We open with a group of kids around a campfire, listening to some salty old sea captain telling them a ghost story – and essentially telling the audience what is going to happen over the next 90-minutes.

The town of Antonio Bay, in northern California, is preparing to celebrate its centenary. Between midnight and one o’clock on the day before the celebration, strange occurrences happen all across town. Ghostly happenings in the dead of night. A strange glowing fog descends across the water, and over the next 24 hours it will bring horror and death to the residents of this sleepy little town.

Among them are Stevie (Adrienne Barbeau), the honey-voiced DJ at the local radio station, town resident Nick (Tom Atkins), hitch-hiker Elizabeth (Jamie Lee Curtis), and Hal Holbrook practically stealing the entire film as Father Malone. They each have their own stories, and Carpenter cuts between them, slowly building the tension and unravelling the malevolent secret of the fog.

There’s never been anything overtly flashy in Carpenter’s style; it’s all perfect composition, elegant framing, and precision timing. There’s an economy of movement and clear layout of what is happening in Carpenter’s films, and The Fog is a great example of this. With Dean Cundey’s beautiful and atmospheric cinematography added to the mix, it makes the film an absolute visual feast. The image of the ghoulish silhouettes in the fog is an iconic moment in horror cinema. Seeing it restored in 4K UHD is truly stunning.

This new release comes packed with extras, and on the first disc there are two fascinating commentary tracks. The first of which is with John Carpenter and Debra Hill. The second is with actors Adrienne Barbeau and Tom Atkins, and production designer Tommy Lee Wallace. The main event on the second disc is Retribution: Uncovering John Carpenter’s The Fog: A brand new 45-minute retrospective documentary. This fantastic programme unpicks every aspect of The Fog, and features interviews with all the main collaborators.

Another brand new featurette made especially for this release is The Shape of The Thing to Come: John Carpenter Un-filmed. This short doc explores some of the films that John Carpenter came very close to directing, such as The Philadelphia Experiment, Stephen King’s Firestarter, and a remake of The Creature from the Black Lagoon. This is presented by John Kenneth Muir, author of The Films of John Carpenter.

There’s a collection of special features from the 2003 DVD release, including an interview with the director, and a short featurette where he sits beside a TV and analyses a few scenes from the film. There’s also an Easter Egg to be found on the main menu for the special features disc. I eventually found it, though purely by accident!

Elsewhere on the disc is Fear on Film: Inside the Fog, a short programme about the film produced when it was released in 1980. It includes clips from the film and interviews with Carpenter, Adrienne Barbeau, Jamie Lee Curtis, and Janet Leigh. There’s also a 90-second side-by-side comparison of the rudimentary storyboards with the finished film.

There’s another cool little feature with an abridged episode of Horror’s Hallowed Grounds, with horror expert Sean Clark giving us a guided tour of the film’s locations.  The disc is rounded off with a selection of outtakes, TV spots, theatrical trailers, and a photo gallery of film stills and behind the scenes shots.

The box set also comes with art cards, a copy of the soundtrack, a 48-page booklet, and a disc with the film in ultra high definition. Seriously, you can’t even begin to consider calling yourself a John Carpenter fan unless you own this. It is an essential addition to your collection. For more information about the 4K restoration, and where you can find screenings of The Fog, They Live, Prince of Darkness, and Escape from New York near you, visit www.johncarpenter4k.co.uk