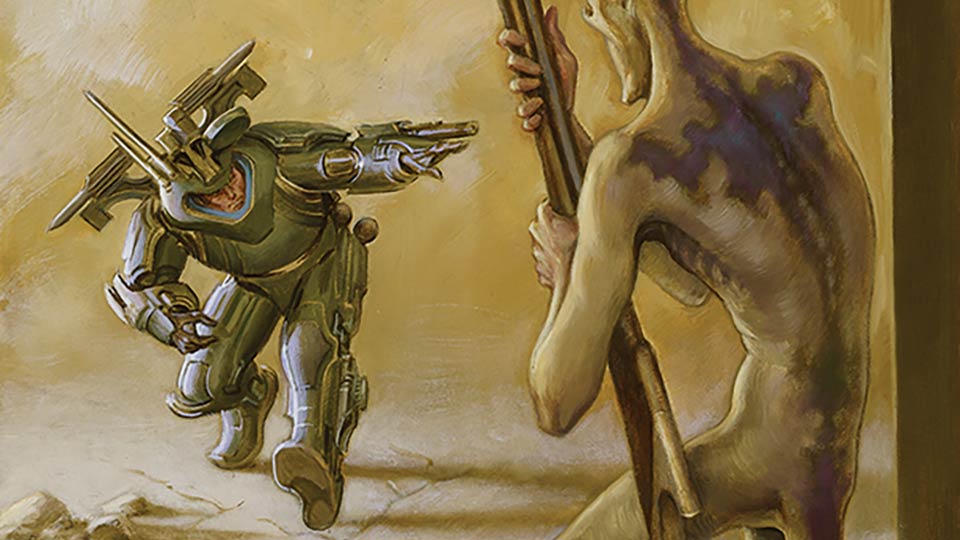 Earth is caught in the midst of a deadly conflict with the implacable ‘Arachnids’, a swarm of insect-like aliens intent on wiping out all human life. Fresh recruit Juan ‘Johnny’ Rico signs up impulsively, keen to prove himself in the upper echelons of the Navy. Instead he finds himself assigned to the Mobile Infantry, the frontline where all that stands between life and an alien death is a sophisticated armoured suit.

Serving in the US Navy for five years, Robert A. Heinlein brought the lived experience of his service to this, his most famous work. Written partly in reaction to the US policy of ceasing nuclear testing in the late 1950s, Starship Troopers remains a controversial novel, with its central argument that violent conflict is an inevitable and necessary part of human civilisation.

In his perceptive introduction for this edition, Joe Haldeman, author of The Forever War, talks about the influence Starship Troopers had on his own work, and how the fallout of the Vietnam War changed the speculative fiction of the 60s and 70s.

Halderman writes at the beginning of his introduction: “Heinlein’s writing grabbed me by the throat when I was ten or eleven years old, and he dragged me through adolescence without my offering the slightest resistance. He goes on to say:
“…for most of my life I’ve been primarily a science-fiction writer and reader, and would never deny the primacy of Robert Heinlein on my own list (with Clarke, Asimov, and Bradbury crowding close behind).”

Starship Troopers by Robert A. Heinlein, illustrated by Stephen Hickman and with an introduction by Joe Haldeman, is available exclusively from The Folio Society.