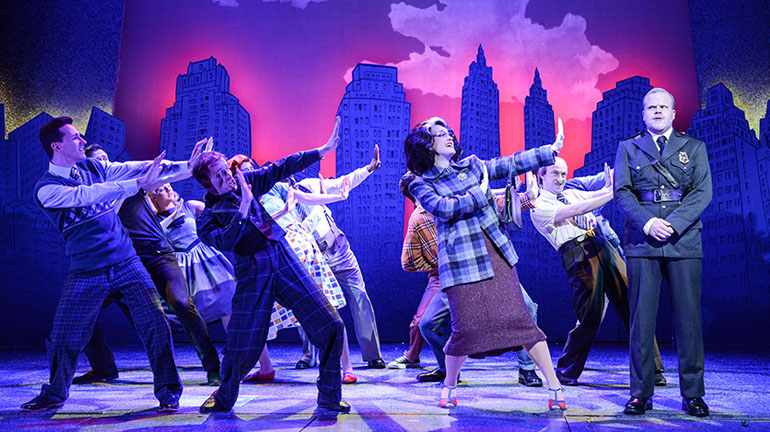 Mischief Theatre are up to their old tricks as they break into Leeds Grand Theatre this week with their all-new production, The Comedy About a Bank Robbery.

Following the West End and Broadway sensation The Play That Goes Wrong, the company’s latest caper is set in Fifties’ USA and follows the exploits of a team of disorderly prison escapees as they plan an ambitious bank heist. Of course, things don’t quite go to plan…

Inevitable comparisons may be drawn between Mischief’s phenomenal Goes Wrong franchise and this latest offering. Whilst physical comedy and self-reference is the basis for many of the gags, this show is, for the most part, a straight-up knockabout farce inspired by traditional slapstick capers of the 1930s.

But it’s much more than an homage to past classics. The play’s rocketing pace and cartoon violence will no doubt hit the mark with discerning modern kids, whilst older audiences will delight in the meta-humour which underpins almost every scene. There is a feeling that the company brings its audience into each joke; sharing a consciousness of the strictures of live stage performance. It’s not a new convention – pantomimes trade off this inclusive formula every year – but it’s rare to see it achieved so pointedly in a new touring play.

Perilous stunts in The Comedy About a Bank Robbery. Credit: Robert Day

The Comedy About a Bank Robbery also excels with its ambitious production design and effects. David Farley’s many sets unfold like origami flowers, sprouting parlours, foyers and bedrooms through effortless scenic changes. Practical showpieces include a retracting bed with a mind of its own and a top-down view of an office – realised in true Hitchcockian style with cast members abseiling across its floor –  offering plenty of tense comedy thrills.

That’s not to say the show just relies upon its special effects. There are many instances where the cast realise complex scenes with the simplest practical support. Through innovation and mime, a laundry basket becomes a car whilst a performer is seen to have an exhaustive fist-fight with himself. It’s an inspiring demonstration of how traditional techniques and everyday items can take on life through performance – even within such a heavily-resourced play.

An exceptional cast discharge a boundless energy, ensuring the show never has its foot off the gas. Relentless physical gags are shot out as if gunning for a world record, whilst tack-sharp dialogue offers a broad range of comedy wordplay. The whole ensemble provides brilliantly timed performances, though special note must go to Jon Trenchard as walking disaster zone Warren Slax – the man who can’t even jump out of a window without screwing it up.

A case of mistaken identities in The Comedy About a Bank Robbery. Credit: Robert Day

A frantic farce for all the family, The Comedy About a Bank Robbery is a frenzied, fulfilling knockabout which leaves you thoroughly charged. It’s a perfectly modern pratfall comedy, expertly executed to draw out laughter and thrills a minute. Another breakout hit – catch it whilst it’s still on the run.