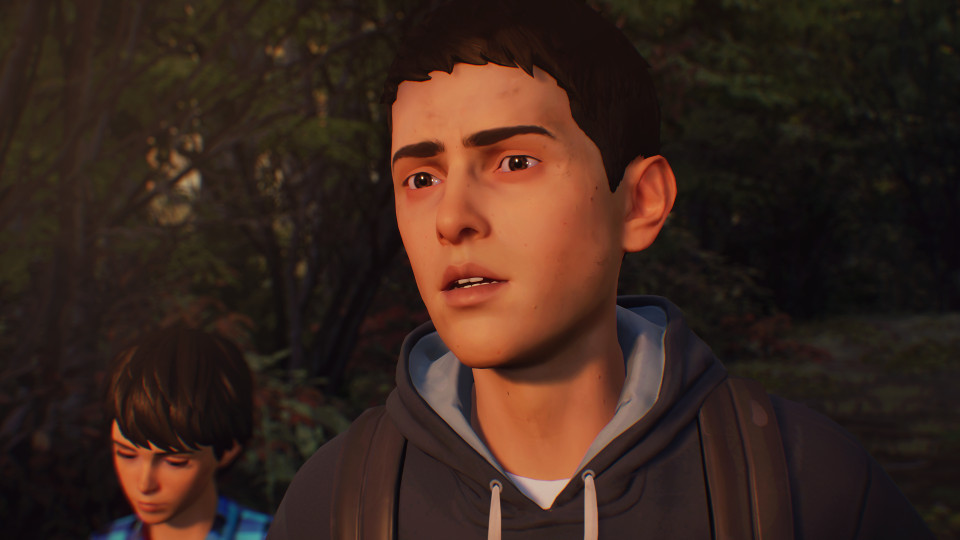 Life is Strange 2 is a new five-part series set in the same universe as the previous Life is Strange games. As ever, the first episode has the hardest task of setting events in motion for the rest of the series.

While the universe is the same, pretty much everything else is brand new. This new adventure isn’t about Max Caulfield and Chloe Price. Instead the focus is on the Diaz brothers, Sean (16) and Daniel (9) who live in Seattle with their father, Esteban.

The game begins with a flash forward showing some kind of incident, possibly supernatural, captured from a police dashcam. It’s not immediately clear what’s going on, but the episode revisits it later. The story then jumps back to a normal day where Sean, who you play as, is planning to attend a party with his best friend Lyla.

Watch the Life is Strange 2 launch trailer below:

Graphically the game looks much improved from the original Life is Strange and the world feels bigger and more open. Despite the new setting and characters, the gameplay is instantly familiar if you’ve played the previous entries. There’s plenty of walking around and examining as much or as little as you like. The soundtrack is as brilliant as ever and the many wonderful quiet moments to reflect also make a return.

Sean’s first task is to get supplies and money together for the party later. The game lets you decide what to pack in your rucksack, such as beer or soda. As usual even the tiniest decision can influence what happens later on and we do get to see the impact of some choices in this episode. Others will presumably carry forward into the later episodes.

The seemingly normal day soon turns into a nightmare after Daniel has a run in with the horrible teenage boy next door. Sean gets involved, the police turn up and Esteban tries to help too. Everything gets a bit out of control, setting of a chain of events that leads to Sean and Daniel fleeing the scene with nothing but Sean’s rucksack. It also seems that Daniel might possess some kind of power.

Not knowing what to do, other than not return to Seattle, Sean decides he and Daniel will head south and attempt to get to Puerto Lobos. It’s the place their father grew up in Mexico.

This leaves Sean in charge of his little brother who doesn’t really understand what has happened. As much as Daniel needs his big brother, Sean also needs Daniel and their bond strengthens throughout the episode. Their relationship is the biggest focus of this episode and it’s really quite touching and emotional.

Along the way, Sean is faced with many dilemmas and has to take into account the effect his actions might have on Daniel. For example, when the pair of them are hungry do they spend some of their limited cash or try and steal to survive. Stealing might be an easy option but if it’s fine for Sean to do so, Daniel is likely to think he can to.

View some screenshots from Life is Strange 2: Episode 1 in our gallery:

One thing I really liked was how Sean gets many opportunities to teach Daniel something. These are optional but important and I expect will have a bigger impact on how things end up between the brothers later in the season.

As much as I enjoyed this episode, I would have liked a bit more of a challenge. There also appeared to be a few sound issues. The voice acting is very well done but at times someone speaking seemed to get cut off if I walked too far ahead or interacted with something too soon. This wasn’t a game-breaker but it was annoying and I’m sure I missed a few things.

Overall, Roads is an excellent episode and a great introduction to Life is Strange 2. In just four hours I came to care for the Diaz brothers and can’t wait to find out what happens to them next. I’m also intrigued to understand more about Daniel’s power. If you enjoyed the previous Life is Strange games then this comes highly recommended.

Life is Strange 2: Episode 1 – Roads was reviewed using a digital code supplied by the publisher.