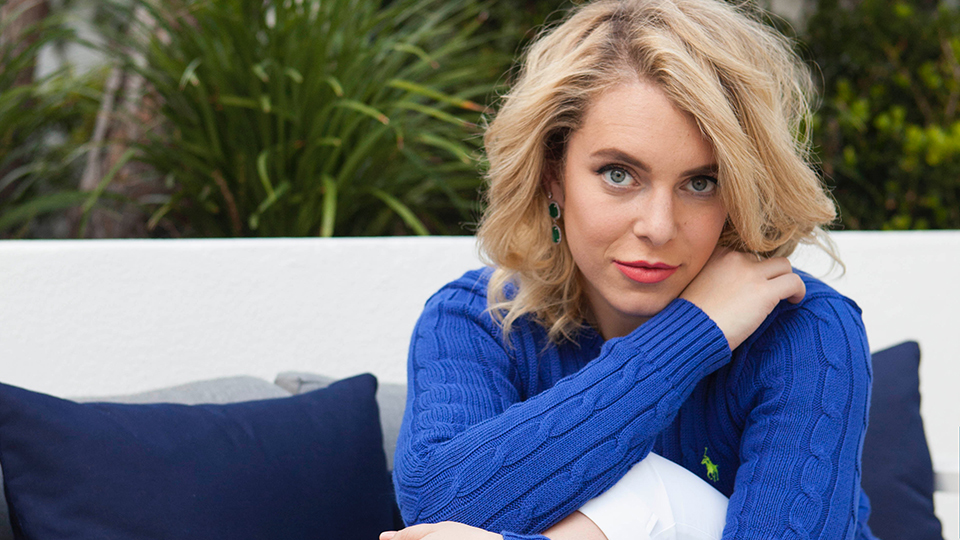 New York City-born actress Renée Willett is an actress whose star is very much on the rise.

Landing her breakout role in 2016’s The Comedian opposite Robert De Niro, Leslie Mann and Danny DeVito, Willett has several projects in the pipeline. She’s recently been filming Run With the Hunted, due for release in 2019, opposite Ron Perlman and Michael Pitt.

I caught up with Renée recently to find out more about the film, discuss her experiences on the set, and to discuss her dream role.

Hi Renée. How are you today and where does this Q&A find you?

I am wonderful. Thank you. I am in West Hollywood, Los Angeles, California. It’s a beautiful Sunday afternoon. I just finished an audition tape and a quick hour of tennis.

You’ve been filming Run with the Hunted alongside Ron Perlman and Michael Pitt. What can you tell us about the film and your role in it?

My role as Keryn, the Sheriff Office Receptionist was alluring to me for multiple reasons. First, my character continually gets inappropriately harassed by her boss for years. A topic that is important to me and one I think is perfect to bring to light during the current times. Second, my character spans over the course of 15 years, something I thought would be really fun to do. It was definitely a new experience within my career that I very much enjoyed.

Michael Pitt is such an amazing method actor who morphs into his role. Witnessing it in person, and knowing of much of his process he endured to prepare for this role, is something that is very exciting to me about this film. I appreciate amazing acting when I see it. I’m excited for the viewers, and excited to see myself, how his performance shines on screen.

What attracted you to Run with the Hunted?

Run With The Hunted seemed like such a different type of project for me to be apart of, something out of my wheelhouse. I’m not just talking about creatively. We shot in Tulsa, Oklahoma, a place a never thought I would go in my life. I very much enjoyed the opportunity to experience a new culture, one that is very different from the city life I am used to. I welcome jobs that will also provide me with new experiences in many ways.

John Swab is the movie’s director. What was he like to work with?

He’s a fun guy. He’s got this hair and these tattoos, he looks like one thing, and as soon as he opens his mouth you discover he’s the sweetest person and soft spoken. I liked just hanging out with him on set, he’s a cool guy. I hope to work with him again.

In what ways did you prepare for this role and what hurdles have you had to overcome?

Playing the same character over such a long time gap had its challenges. I made some choices like speaking slightly deeper and embodying a more haggard persona of someone who is disappointed in her life – that she is still in the same dead end job with the same horrible boss. These aspects mixed with the makeup; lines of wrinkles and such all over my face to make me look older, was really cool. It was an adventure!

What made you decide to be an actress?

I’ve wanted to be an actress ever since I watched my first episode of Barney and found out what an actress was. From that moment when the spark was lit, this dream has embodied every part of my being. Professionally, my acting career began after graduating from college at USC. Once introduced to life on set, I started to discover what I was most attracted to; comedy. I look up to actress like Lucille Ball, Elizabeth Banks and Leslie Mann.

Acting is a notoriously difficult career to get into. What would you say have been the biggest challenges so far?

Pursuing a career as an actress has its challenges. Finding ways to make yourself stand out from the pack and booking jobs themselves pose difficult journeys. My greatest challenge however, is simply getting the opportunity to audition for things. Without auditioning an actor doesn’t have a chance to obtain the job and people in other industries don’t realize that just landing that audition is a small win in itself.

You’ve packed in quite a lot of roles over the past few years. Which has been your favourite and why?

The Comedian. One of the first films I’ve ever done I got to work opposite Robert De Niro and Edie Falco in New York City. As a New Yorker shooting in Tribeca with Mister Tribeca himself was a whirlwind.

If you could star in any movie, which one would you choose and why?

An Indiana Jones or Back to the Future remake, with Spielberg directing of course. Except the lead would be a woman, me!

My dream has always been to land a role in a Judd Apatow film as well as work opposite Will Farrell and/or Ben Stiller. Working with any of those geniuses would be a dream.

I am also a stand-up comedienne. I have some shows coming up in NYC. I have a couple of indie movies coming out soon including Kingfish with Molly Ringwald. I am also shooting two films in the next few months; One called Cutman with Val Kilmer and another called Ditch Plains with Famke Janssen.

Run With the Hunted is due for release in 2019.