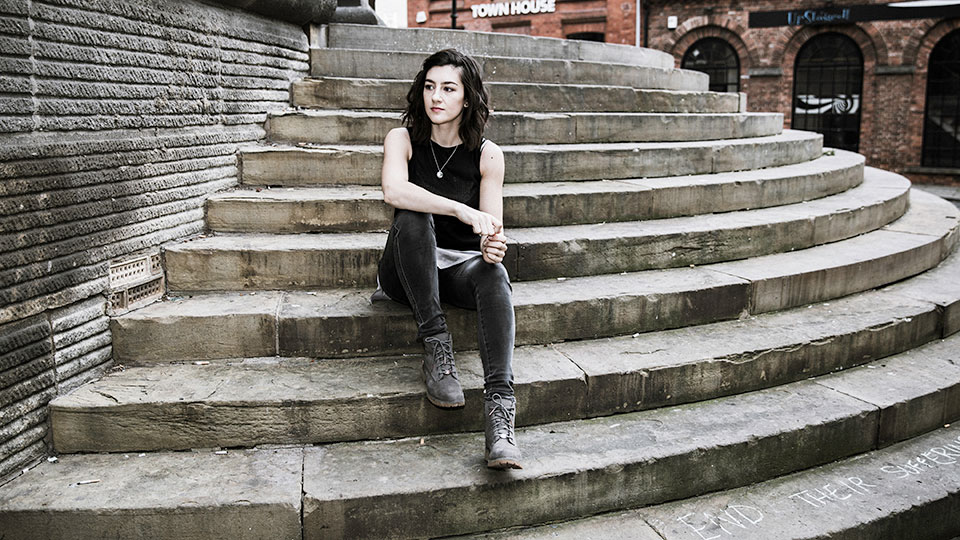 Hannah may be best known for her YouTube channels, where over the space of 12 years she has accumulated more than 100 million views and 600,000 subscribers. She’s also experienced chart success with her original material, including number one hits in Vietnam and Laos, and a top ten hit in Mongolia in 2015 with her original track, Headrush.

The release of RED on 31st August, was also supported by a 7-date UK tour in early September.

I spoke with Hannah about taking creative control of her new release, achieving social media success, and finding unexpected fame in unexpected places.

What was the reaction like from fans when RED was launched last month?

It surprised me, actually. It charted at number four in Malaysia and number 26 in Denmark. It’s incredible and the feedback’s been good from everyone, really. I made this album a mix of pop and acoustic, and wasn’t sure if it would work for the listener, I guess, because people tend to like one or the other. But, doing what comes naturally seems to work, which is great.

Had these new 14 tracks been with you for some time, or did you knuckle down and write specifically for this album?

We had a big bunch to whittle down from, so all the songs were written before the recording process started, but some of them changed from the demo stages to the recording. Some of the sounds are quite different to what I usually do, I’m trying not to limit myself too much on genre for this album, I thought, let’s go with what works. I called it RED because I felt that colour sums up all the emotions… love, lust, anger, jealousy… that sort of thing. And, to be honest, most of the songs are quite angsty, there’s a couple of happy songs, but most of them are sad or angsty.

Will long-time fans notice any difference to the sound and style of the new record?

For people who have heard my acoustic covers, it will definitely be familiar. I’d describe the album as guitar-driven pop, so there’s quite a few acoustic songs, but there’s always an element of what I’ve always done. It will be an easy transition, I’m not going from strict acoustic to hard-core metal. It should be something they recognise. It’s got my voice on it, so people will recognise it’s me.

The album was produced and recorded back in your hometown of Leeds. What was the process like?

My friend, Ben Matravers, who works out of Leeds, recorded and produced the album. We’d worked together on acoustic covers I’d put out on YouTube before. We worked really well together, so it seemed a natural thing to do for this album.

We got some additional production done and the album was mixed by Lee Smith in Leeds, so everyone who has worked on the album, apart from the mastering, has been in my hometown which has been quite good. It was a very organic, interesting, but very fun time.

I’d previously done two EPs of original songs and so this is definitely the biggest body of work I’ve ever done, it’s really exciting. This feels bigger and more of a statement.

You’ve amassed an amazing following on social media. What’s been the secret to developing such a global fanbase?

Originally, I found YouTube and thought what a great way to find an international audience. I was putting my own spin on popular songs that people were already searching for, so they found me and then found my original songs. YouTube, as a platform, was still developing as I was developing as an artist, so everything was improving at the same time – my ability and the platform’s popularity. Through doing YouTube, I’ve definitely been able to progress my career further.

You have a following in places like Vietnam, Laos and Mongolia. What’s it like having a fanbase in countries you haven’t had the chance to visit yet?

Singer-songwriters have quite a big and dedicated following over there. In South East Asia, it’s a very big genre. Whereas here in the UK, when Natalie Imbruglia released Torn and James Morrison and KT Tunstall first burst onto the scene, it was a huge peak for the UK’s interest in singer-songwriters, but it’s changed a lot. There’s a lot more grime and hip-hop on the charts, so it’s just finding a new audience for your music, I guess.

Because I try some days to work a 9-5, I realised quite early on that I was posting things on social media that was at a time that was perfect for them. I think that’s really contributed to having a much bigger audience over in South East Asia. I think it’s been a timing thing more than anything.

Are tours to some of these locations on the cards in the near future?

I’ve been as far as Qatar, and did a couple of show in Doha, which was amazing and a lot of people came over from the Philippines which was really cool. It’s definitely something we’re working towards now. Especially the album being at number four in Malaysia, it’s making it possible. Being independent, it’s all down to the listeners, so it being successful over there has opened doors already for me, so I hope we can make it happen next year. I’m a bit nervous because I don’t know what to expect. I anticipate them being slightly bigger shows, but whatever happens, it’s going to be amazing.

Hannah Trigwell’s album RED is out now. Watch a live acoustic version of Everything Will Be OK below: