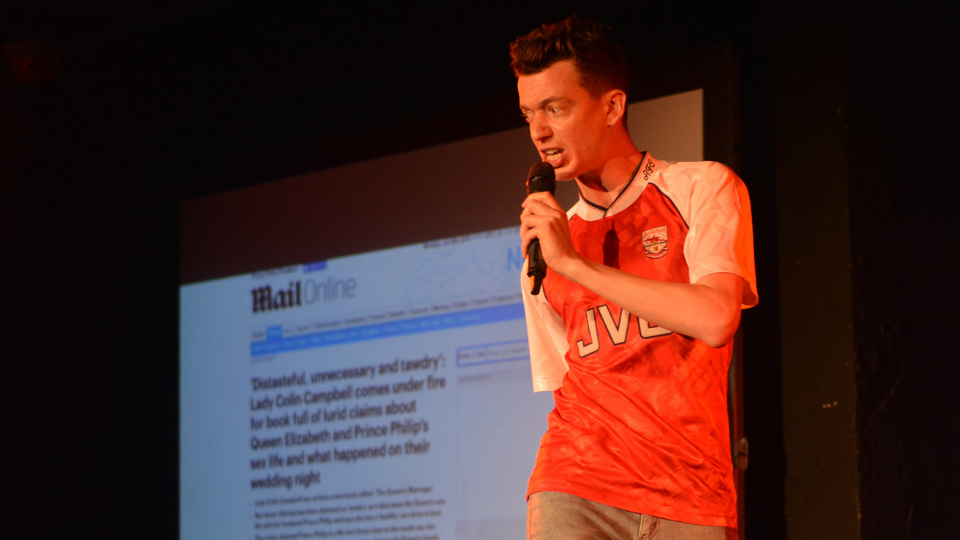 GENERATOR: Autumn 2018 at The Tramshed is the latest instalment of the theatre’s commitment to showcasing new performances from young artists and will feature the work of emerging comic Dan de la Motte.

Quite possibly the busiest man in London, he also juggles his role as a Queer Tours of London tour guide, an LGBTQI history organisation offering bespoke bus and walking tours of the capital. He also recently curated an art exhibition – a fifty-year retrospective of the drawings and photography of the Gay Liberation Front’s Andrew Lumsden.

Clearly not busy enough, you may also recognise his voice as host of the popular Off Book Podcast as part of his role at the Young Vic, interviewing both theatre legends and rising stars.

With a performance at GLYPT’s GENERATOR: Autumn 2018 at The Tramshed on the horizon this month,  I caught up with Dan to find out more about his act, which is rooted in his online observations.

Tell me about your comedy act?

I am obsessed with online message boards. What drives individuals to make the most outrageous (or even weirder: banal) comments underneath stories on the Mail Online, or underneath videos on Youtube? The first proper show I made was about Mary Bale. Remember her? She was the woman that threw a cat into a wheelie bin in Coventry and was caught on CCTV. Now, I’m not saying that we should all go around livin la vida loca and throwing pets in bins, but I found the online vitriol fascinating. Since then I have been trawling the web for news stories, not because I’m interested in the news stories, but because I’m obsessed with what people say on the bottom half of the internet.

I pick out my favourites, and facilitate a form of live discussion, with audiences reading out some of these comments. It becomes kind of sinister sometimes, as you are removing the anonymity that these comments often hide behind – they suddenly have a face.

You’re interested in political and LGBT+ activism both presently and historically – does this inform your work?

I engage in small acts of everyday activism. Often it’s so difficult to comprehend how you can help to change the world, so I decided that perhaps little acts can influence bigger things. Being an activist isn’t just camping outside Downing Street and demanding a final vote on Brexit (although we should do that I suppose), but it’s also being veggie, giving up your seat, asking questions and speaking truth to power. And that has permeated into my comedy and performances. Human interaction and networks. An eye for the minutiae, and then building upwards from this as a starting point.

Tell me about your comedy influences?

Not exactly the edgiest of choices, but I love Harry Hill. I genuinely think he’s a genius. Do you remember how brilliant TV Burp was in the early 00s? My old flatmate (the theatre photographer Helen Murray) used to work for the now-lost comedy venue Invisible Dot. Whenever Harry was on, I always insisted that she took me. I told him how much I loved his series of Stars in their Eyes. He was happy when I said this, as it was unjustly cancelled after just one series. The British public just weren’t ready for it. And then look what happened – Brexit.

At the Edinburgh Fringe Festival this year I caught Nick Cassenbaum’s My Kind of Michael, and it made me re-remember how brilliant Michael Barrymore was in his heyday. I cannot name a single human being who is/was better at their job than Barrymore was at his in the 90s. His common touch, his warmth and love for everyday human beings was a joy to watch. I was only 6 or 7 at the time, but it was clear that this was a master at work.

What role does your comedy have in challenging social perceptions?

Well I hope that it makes audiences see just how ridiculous and infantile political discourse in this country is. That this Fake News era has given people permission to just spout bollocks on the internet, and we are just meant to accept it. I workshopped an idea I had a while back and someone said that my work was divisive, and actually I suppose that’s true. But hey, I’m working within the society that exists. I guess I could be labelled a metropolitan liberal elite, the kind of person the Mail warns you about – a queer pinko veggie Corbynista. But I’m going to claim that title and use it. People like me are seen as something to be distrusted, and so I use my performances as a bit of a fight back.

What makes you laugh on a daily basis and where do you draw your inspiration?

I love silliness. A silly voice or silly face will always make me giggle. Or someone falling over. That’s always a gem (as long as they’re not elderly). Puns get a bad rep, which I think is kinda snobby actually. A pun will always make me smile. They’re punny. Last week I asked Mum if she liked synth music, and she said ‘I do, synth you ask’.

What comedy acts or gigs do you love to visit in London and why?

Not really comedy, more performance art, but I really love David Hoyle. He is such an inspiration. His queerness is on the margins of society, and that’s where he wants it to stay. He says: ‘I’m over here, come here if you want to listen, I’m not coming to you’ (that’s not an actual quote) and I think that’s exactly the right way round. He provokes, questions, teases out meaning and leaves audiences engaged and mobilised and feeling loved, like a preacher to a congregation, but without that unbalanced power dynamic. Everyone should go and see David; he’s often on at Bethnal Green Working Men’s Club (my favourite venue in London) or the Royal Vauxhall Tavern.

What other projects do you have in the pipeline?

Currently I’m trying out a new idea (based on the Mail Online message boards) at The Tramshed in Greenwich on Friday 28 September, as part of their Generator Comedy Special. Then I’m taking that piece to the Rosemary Branch Theatre as part of their Stupid Sunday on 7 October.

And then I’m looking forward to performing in the Truth to Power Café at the Roundhouse on Halloween, which combines activism and performance as a sort of Town Hall vibe, as well as working on a couple of performance pieces for children.

Meanwhile Queer Tours of London goes from strength to strength. We are a collective of Queer performers, artists, campaigners, activists and tour guides. I’m working with my pal Dani Singer (who I appeared on Bargain Hunt with) to flesh out a Queer walking tour of London’s theatre history, and I’m planning a couple of new Polari workshops, the secret language spoken by gay men in the 1950s and 60s.

Last year I hosted a queer version of Desert Island Discs (yes that’s right) in a function room in a pub in the darkest depths of South London (I’m a Hackney boy). I was interviewing some pretty incredible people; Linda Bellos, the radical feminist ‘Loony Left’ leader of Lambeth Council in the 1980s, and Andrew Lumsden, one of the key figures in the Gay Liberation Front in the 1970s. And in the crowd were… one gay, one lesbian and her two dogs. Sometimes the barman came in to see if there were any empties that needed collecting…