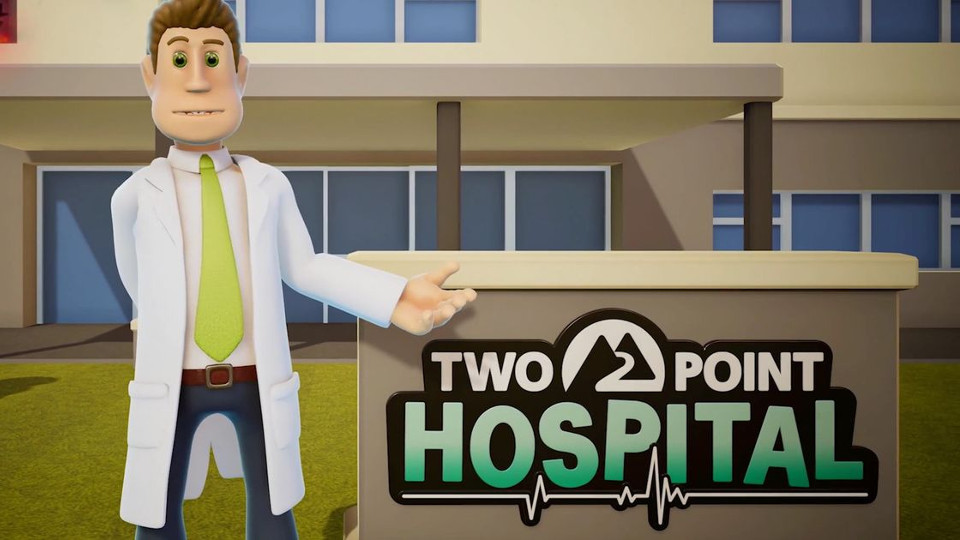 Two Point Hospital (TPH) by Two Point Studios and published by Sega is a love letter to the decades-old Theme Hospital. If you loved Theme Hospital in the past don’t bother reading this review, go and buy it already as you’re going to love it!! If you’d like to learn a bit more about the game, however, please hang around for a few minutes and cast your eyeballs over what I have to say.

TPH is, not surprisingly, a hospital management sim which puts you in charge of gradually bigger hospitals and their unique challenges. The aim is to cure as many people as possible generating income so that you can reinvest and improve your hospital. The game eases you in really well and it takes a fair few levels before the difficulty level poses much of a challenge.

You are free to design your hospital as you wish within the constraints of the hospital layout, freely placing the various diagnosis and treatment rooms as you wish. At first I was doing this haphazardly without much thought but after a while I was intent on making my hospitals as efficient as possible. You can decorate your hospital to your heart’s content, right down to the artwork on the walls in the Dr’s office.

You’d be forgiven for thinking this all sounds a bit simple but the other systems within the game are where the challenges lie. You have to balance the happiness of your patients and staff by tending to their needs. They need to be fed and watered, have somewhere to rest and somewhere to go the toilet. Staff need to be trained and well paid in order to stay motivated or they will quit. Your hospital needs to be kept clean and maintained and obviously, your patients ideally won’t be dying in your halls as this just leads to ghosts to deal with! All this whilst making sure the money keeps rolling in.

Yes, I said ghosts (don’t worry, you can train your janitors in ghost busting!). TPH deals with what could be a grizzly game with a very light heart and a great sense of humour. You will be curing diseases such as ‘animal magnetism’ where people have become literally attached to their pets. ‘Jest infection’ is one of my favourites where your patients are escaped and need treatment to lower their ‘sense of humour’ before they can be returned to society. Many illnesses need their own special treatment rooms to deal with, each of which usually has some sort of crazy contraption and great animations.

Each hospital has a star rating out of 3, get to one star and you unlock the next hospital(s) and you are free to move onto the next challenge while keeping your existing hospital as it is. You are free to jump between hospitals at any time and a great feature is that you can take all of the things you unlock throughout the game into any of your earlier hospitals so for those completionists who want to get 3 stars on every level there is plenty to keep you busy for many an hour.

View some Two Point Hospital screenshots in our gallery:

I did come across a few bugs with the game though nothing game breaking. On the odd occasion a patient or staff member wouldn’t be able to find their way to their destination because they got stuck on what looked like nothing. I found that simply picking up the room would free them up and you can just put the room back in place so no big deal. I also found the difficulty level lacking for the first six hospitals or so and only found the game challenging at later levels where there is a big spike in difficulty.

There is one other negative that I found very frustrating. Before and after each treatment it seems patients need to go back to the GP office before they can progress. This caused bottlenecks with massive queues for these offices. On some levels I had as many as 8 GP offices and would still end up with people queuing round the block so to speak. You can put staff members in here who are better at GP tasks to make it more efficient but even with these guys in place the GP office can bring your hospital to a grinding halt.

Overall the game is really fun and there is a tremendous amount of detail in the systems that run in the background giving you the power to not only finely dictate how your hospital looks but also how to improve its efficiency by choosing which staff members can work in each room. The early levels are quite relaxing to play and it’s quite easy to get a one star rating on any of the levels. For people who want more of a challenge this is there too in the later levels and for those who want to three star every level.

Two Point Hospital was reviewed using a digital code supplied by the publisher.