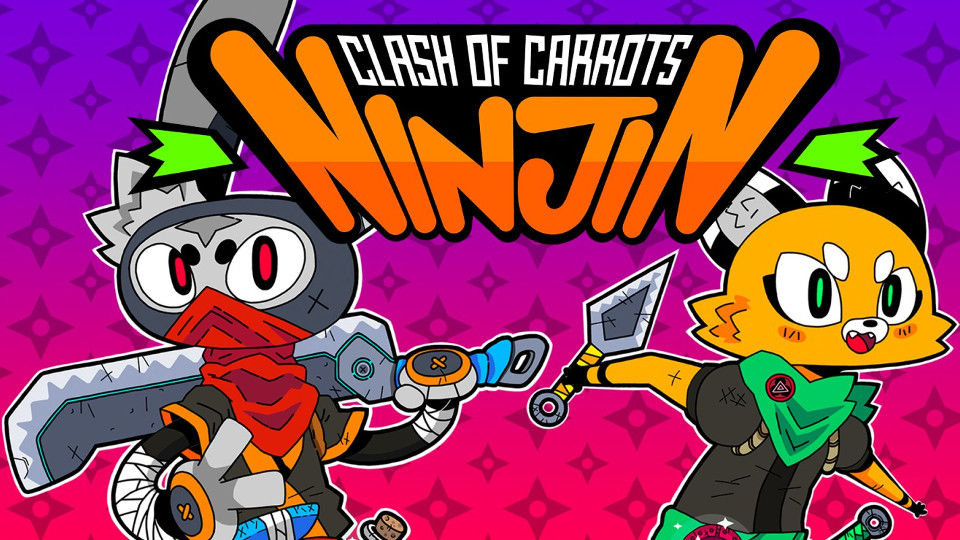 Set in a stylish and cartoony feudal Japan, join Ninjin the bunny and his fox sidekick Akai as they set out to right all the wrongs that Shogun Moe has put upon the innocent folks of the carrot eating land! Pocket Trap brings us an exciting and visually stunning adventure as we sprint endlessly to restore the flagship of vitamin A to order once again!

Played as a side-scrolling beat ’em up, Ninjin: Clash of Carrots has a few very unique qualities that set it apart from any mundane rendition of the genre. You’re able to customize your character with various weapons that range from useful to the just plain absurd. Seriously, I played half the game with a banana as a weapon and have never apologised for it–there’s something about bashing an enemy over the head with a giant yellow fruit that tickles me pink. You have a whole bank of powerups to earn and choose from, ranging from buffers on post damage invincibility, or a little boost to the overall HP. To find these seemingly endless options, you can earn them in game by random drops, playing Oni TV Show, or purchasing them from a wide eyed Corgi that runs a shop. Careful though! As much as you unlock, there’s only so much room to equip…so finding the right combination for the battle at paw is paramount.

Watch the Ninjin: Clash of Carrots announcement trailer below:

Oni TV Show is a great addition to the regular campaign and works like your standard survival mode. Every ten waves defeated, you gain a special and rare prize, making it all the more worth it. But acquiring this treasure is hard earned; Oni TV Show starts with a few waves of warm up, then really piles on the hurt with the complete cast of baddies to back it up (even if they’ve not been introduced to you in the campaign–no mercy!). You’ll have to be cunning, quick and have all those wits about you to make it far into this one. Oh, and the rub being that they start you out with beginner weapons, earning different options as you go further in. So good luck with that!

Multiplayer is easy as a press of a button, throwing in Ninjin’s fox sidekick Akai. It’s a ton of fun to play with another person, but as these things often do, can get a tad confusing differentiating your character from an enemy when the screen is packed with moving objects. Adding a bit of difficulty to the mix: if either one of you die, it’s back to the start of the level for you–encouraging players to choose their partners very carefully. It’s a double edged carrot…on one hand it makes all the sense to have to keep you both alive, but on the other it’s a departure from standard beat ’em up rules. If you’re playing with someone of lesser skill than yourself, it could quickly turn into a not so enjoyable experience…which is a bit of a shame and can take away from the overall experience.

View some Ninjin: Clash of Carrots screenshots in our gallery:

The art direction is huge for Ninjin: Clash of Carrots. It’s made to be adorable and eye-poppingly colourful. The visuals are slick keeping with the stylized pace of the game as a whole. Enemies are introduced one at a time with amazing title cards that work to get you amped up to fight. The music feels a bit limited, but the soundtrack there is proves to not only match the feel of Ninjin and his plight, but be pretty dang catchy in the process.

Ninjin: Clash of Carrots feels very much like an arcade game. It’s addictive to unlock all the collectibles and a great time to make your way through each battle. However, if you have any of the younger crowd taking a shine to it on the shelf (the art and character design is quite engaging!), you might want to think twice or judge carefully based on the good possibility that it can get difficult enough to induce the classic rage quit. Ninjin: Clash of Carrots is a great game little game in a tidy package and will bend your reflexes about, leaving you with a solid smile. If you’re down for a challenge, hop right in!

Ninjin: Clash of Carrots was reviewed using a digital code supplied by the publisher.