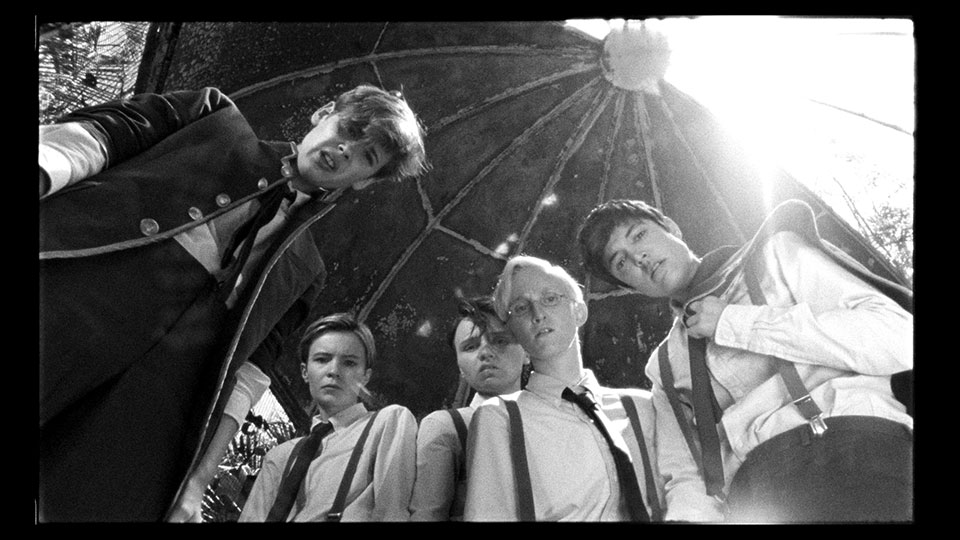 A group of entitled boys led by the sneeringly cruel Tanguy (Anaël Snoek) rape a female teacher at their boarding school. The boys go through a short trial where they try to claim self-defence but no one believes their story. As a punishment they are sent to a ship where they are looked after, and treated strictly, by The Captain (Sam Louwyck) who is known for his ability to reform ‘wild boys’. Once on the ship, the boys start to fight back and set their sights on reaching a supernatural island as their means of escape.

The Wild Boys is the feature film directorial debut of Bertrand Mandico, who also wrote the screenplay. With it, he aims to disorient you with an odd yet intriguing mostly black-and-white tale of gender-bending and coming-of-age. The first thing to note is that the boys are all played by women, which appears to be some comment on gender. The casting also serves a greater point in the plot but I won’t divulge that as it’s a bit of a spoiler.

While the film is visually appealing, some of it appears to have been lost in translation. For example the boys blame their bad behaviour on something they call Trevor (yes, Trevor), whose face appears in the moments they behave despicably. Once you get past that though, you realise that Mandico is deliberately throwing you into an odd and bizarre world that looks a little bit like ours but at the same time is nothing like what we know.

The characters in the film are surprisingly almost irrelevant. With the exception of Tanguy, we don’t really learn enough about the rest of the boys. Their behaviour is so terrible that you’ll find it hard to relate to or sympathise with them. Mandico does nothing to help you understand why they behave the way they do so as you watch them pile up their shocking actions, you feel more appalled than anything else.

The Wild Boys is certainly a bold and ambitious film but it’s not likely to find a wide audience. This kind of avant garde cinema often goes one of two ways; it’s either embraced and called genius or it’s considered overly self-indulgent. I’m afraid I’m inclined to go with the latter and I didn’t feel it was making the profound points it believed it was. Aesthetically the film is a treat but the story makes little coherent sense and left me feeling cold.