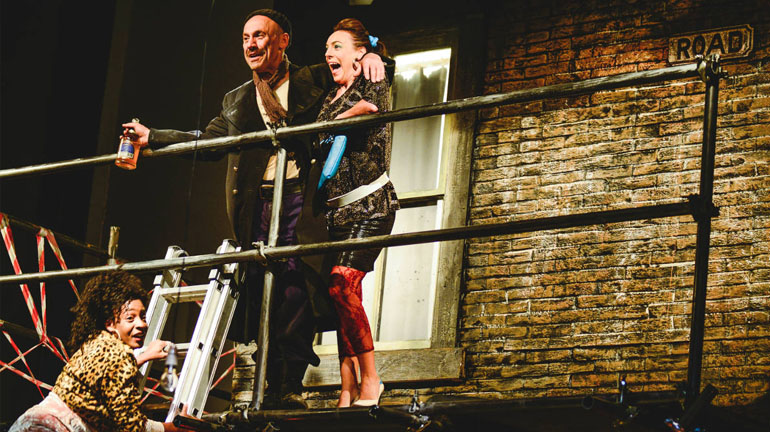 Whilst the fabric of Leeds Playhouse undergoes an extensive refurbishment, a new pop-up theatre opens on the site with Road at the top of the programme. The season also introduces the newly-forged Leeds Playhouse Ensemble — a nine-strong group of artists who will shoulder the rigours of a year of performance in the temporary, yet fully equipped new space.

Since Road’s debut in 1986, Jim Cartwright’s polemic against the industrial decline of Northern Britain has been adapted into both radio and television and is considered to be one of the finest commentaries of its time. Today, a revival under the direction of Amy Leach offers a fresh take on a much-lauded drama, but does the show retain the ability to resonate with modern audiences?

There’s no shortage of politicised theatre when it comes to glorifying economic depression or bashing the brutal policies of Thatcherism. Eighties fringe theatre brimmed with frustrated voices and today’s stagnated government has revived a new political awareness – a division unseen since the mid-Eighties – which is why Cartwright’s play is arguably more relevant today than it was a mere decade ago.

Unlike many of its tubthumping and didactic contemporaries, Road is much less on-the-nose with its criticism and simply presents a range of richly-drawn characters on a Northern street, following their nocturnal business from dusk through to dawn. It’s a telescopic view of people’s lives, asking its audience to intrude on private spaces and draw their own conclusions.

A centrepiece is Joey’s story; a twisted romantic tale of a young couple so desperate to escape their trappings they close out the world with a hunger strike. Tessa Parr and Dan Parr (no relation) provide a head-spinning two-hander which mirrors the heightened melodrama of a Shakespearean tragedy. It’s a purposefully intense and inescapably harrowing sequence which pushes its audience to the limits of discomfort. But it fearlessly drives home the point; these are desperate young people, an abandoned generation, with no escape from their situation. Quite rightly, there’s no escape from the torment for the audience either.

Some urgent levity comes in the form of the play’s narrator, played with cocksure swagger by Joe Alessi. He introduces a whole patchwork of personalities; some funny, others tragic, yet all sharing the same trappings of inertia and poverty. The sad truth is that the funnier sequences – those fuelled by drink and inhabited with desperate grotesques – are the lives which are easier to explore. Like the well-oiled characters in the play, the reality of the situation is often too grim for both audiences and inhabitants tolerate for long; better to drink it away and laugh it off than accept the impossible challenges of a bleak reality.

The disparate cross-section of lives offers a vibrant range of tone and style. Susan Twist provides a stunning scope of characters, ranging from an elderly glamourpuss with shades of dementia to a raunchy middle-aged cougar, sharing a hilarious seduction scene with Lladel Bryant. Jo Mousley and Elexi Walker are irresistibly outrageous as a pair of young girls on the town, foreshadowing the escapist binge-drinking stupors evidenced across British cities today.

Darren Kuppan flexes his muscles as a frustrated skinhead, whilst providing a centred and sensitive performance as a young everyman attempting to make the best of his lot. Robert Pickavance seems to have been gifted some of the most interesting characters in the piece, ranging from an oily derelict to a heartbroken gent grieving for the past whilst topping the show with a hilarious study of a sauced-up and randy git. It’s often superficially funny, but through sober eyes, this tapestry of grotesques and lost souls are the very real product of a social and political disaster.

Road is a fearless and intense production full of grime and grit, sauciness and sex, vigour and vomit. An alarm-call about the horrors of economic stagnation and depression,  it’s less about political leanings and more about the long-term decline of Britain since the war; a farsighted lament for times when the North was a powerhouse of industry sustained by people with purpose and pride.

An impactful opening of a new space at the Playhouse and a tantalising showcase of their new ensemble talent, this is an essential theatrical engagement and a bold beginning to the season. But just don’t expect an easy ride — it’s over two hours of hard, brutal road.