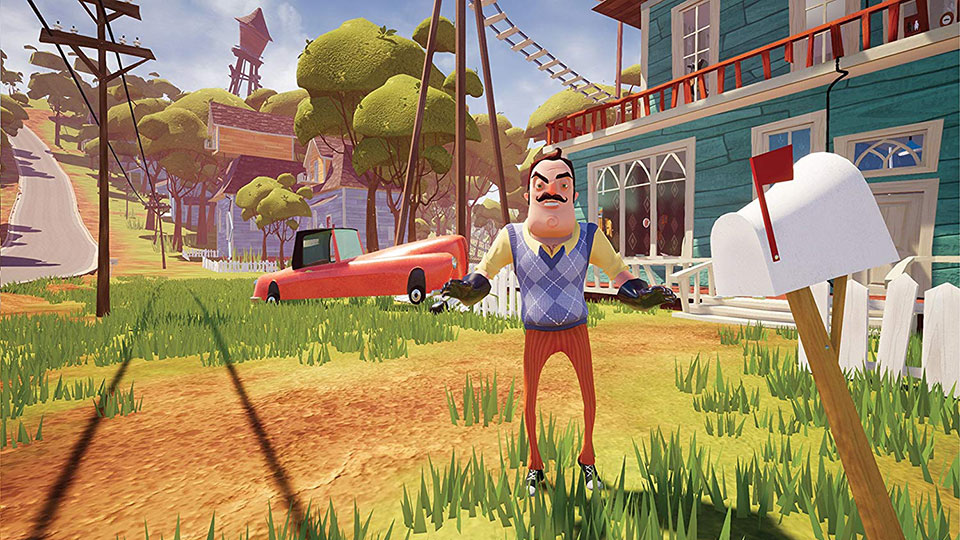 Released as an alpha build back in 2015, Hello Neighbor launched a Kickstarter campaign to finance its development. The game caught the eye of publisher tinyBuild and it arrived on Microsoft Windows and Xbox One last December. The game was met with mixed reviews upon its release, mostly to do with the difficulty of working through it. Seven months later, the game finally made its debut on PS4 as well as being ported to Nintendo Switch and mobile devices.

Hello Neighbor is a stealth survival game where you take on the role of a kid who has just moved into a neighbourhood. You live across the road from a recluse man who appears to be up to something dodgy and your curiosity gets the better of you. Over the course of three acts, you have to infiltrate the neighbour’s house and work your way into his locked basement. Sounds simple enough right? Well it’s anything but simple with a level of difficulty that is sure to frustrate the majority of gamers.

In the first act you’ve just moved into town and it’s the hardest of the three acts to get through. The main problem is that the man’s house is so small that it’s near impossible not to attract his attention. Add to that a series of illogical puzzles that aren’t obvious to work out, and you get off to a very frustrating start. Once the neighbour catches you, it’s game over and you go back to where you started. There are opportunities to slow him down but I didn’t find any of them to be that effective.

It’s no easy feat to get through the first act but once you do the game improves slightly. There is much more room to explore and create distance between you and the neighbour, which doesn’t make things easier but it gives you more time to think and be thorough. At times the game reminded me of the 90s point-and-clicks when you’d run through your inventory and try to interact with anything you can find in the environment to see if it works. I spent a lot of time doing that here and often I wasn’t even sure what I’d done to progress.

My biggest gripe with Hello Neighbor is the clunky control system. You’re supposed to use R1 to pick things up and interact with items but it’s hit-and-miss as to whether it actually works. Sometimes it does what you want instantly, other times you’re manoeuvring around to try and find the right angle before something takes. It’s really annoying and in a game where time is everything, you’ll wind up getting caught just because the poor interactions don’t work that well.

Hello Neighbour has a fantastic premise but the execution makes it more a frustrating experience than anything else. That’s a real shame as there is fun to be had here but a lot of gamers will either turn to YouTube to find a walkthrough or just give up. A game like this simply shouldn’t be so difficult to get through and when you realise how random the puzzles are, you wonder how on earth you were ever going to guess them. I had high hopes for this game but I was left ultimately disappointed.