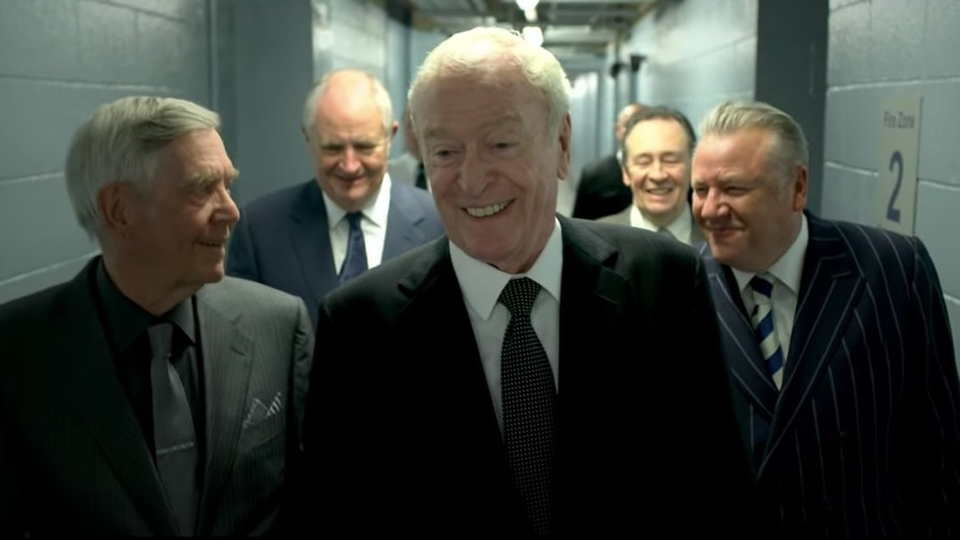 King of Thieves looks to take a more detailed look at the diamond heist and perhaps tells a more truthful account of the crime and its aftermath. But I do know which one I prefer… which one did a much better job at delivering an enjoyable film with a good balance of comedy and caper, and which film had the more engaging and rounded characters. More on that film later.

After a family bereavement, career criminal Brian Reader (Michael Caine) reconnects with an old acquaintance, a young man named Basil (Charlie Cox) who has a grand plan to rob the famous Hatton Garden vaults. He needs Brian and his seasoned team of cohorts to pull the job off, so Brian gets back in the game. But as the crime continues, the gang find that greed gets the better of them as the police slowly build up their case.

With a cast this good, I was certainly (and not unreasonably, I think), expecting fireworks. But the weak script and the thin characterisation doesn’t help them out at all and they deserved much better. The pick of the bunch is Jim Broadbent who once again shows us what a national treasure he is by easily convincing as an unhinged career-criminal who could pop at any time. Ray Winstone does well playing Ray Winstone, as does Tom Courtenay playing Tom Courtenay. Michael Caine isn’t used nearly enough, Charlie Cox doesn’t leave a mark and I don’t like that Michael Gambon was relegated to just light comic relief.

King of Thieves also has decent pedigree behind the camera, which is why it’s so baffling that this turned out the way it did. It’s written by Joe Penhall (The Road), directed by Academy Award winner James Marsh (The Theory of Everything), and produced by BAFTA winning and Academy Award nominees Tim Bevan and Eric Fellner (Les Miserables), Ali Jaafar (The Idol) and Michelle Wright (7 Days in Entebbe).

Penhall’s script never lets us see beyond the surface of these characters. There’s a nice scene towards the end when we truly see that these guys maybe aren’t as loveable as they first appear, and this was a glorious opportunity to really turn the film on its head. But this goes begging too. Showing the guys to be the true criminals that they are certainly gave the film a nice edge, but it was too little too late.

I loved The Theory of Everything and one of its standouts was its visual style. James Marsh knows how to make good-looking films but King of Thieves never decides on what visual style it wants. The epilepsy-inducing opening credits try for a Lock, Stock feel, but it just ends up being distracting. The nods to the gang’s past criminality (in the inventive form of old scenes from the cast’s past movies) could have been a masterstroke, but shy of a car chase sequence these all felt half-baked. There’s also a scene where each of the major characters prepare to meet the judge and they use a clip showing each of them walk up from a past film (Ray Winstone’s is Scum for example). It only serves to remind you that this cast are all wasted here, and that there are better films you could be watching instead. And I think they even have to use a clip from The Fast Show for Paul Whitehouse’s one!

I really wanted to love King of Thieves but it’s a film that frustrates way too much, which is a real shame. That might be ok for a pass normally, but with this level of talent and the source material, it’s too big a misstep. But its biggest sin is not utilising this amazing cast to its full potential. At times it really just felt like a poor parody of The Sweeney with everyone shouting and swearing cockney insults like ‘slaaag’ and ‘caaant’ at each other. If you want to watch a film about the Hatton Garden robbery then watch The Hatton Garden Job instead with Matthew Goode and Larry Lamb. It’s infinitely better, has an engaging script and is much more entertaining than King of Thieves.