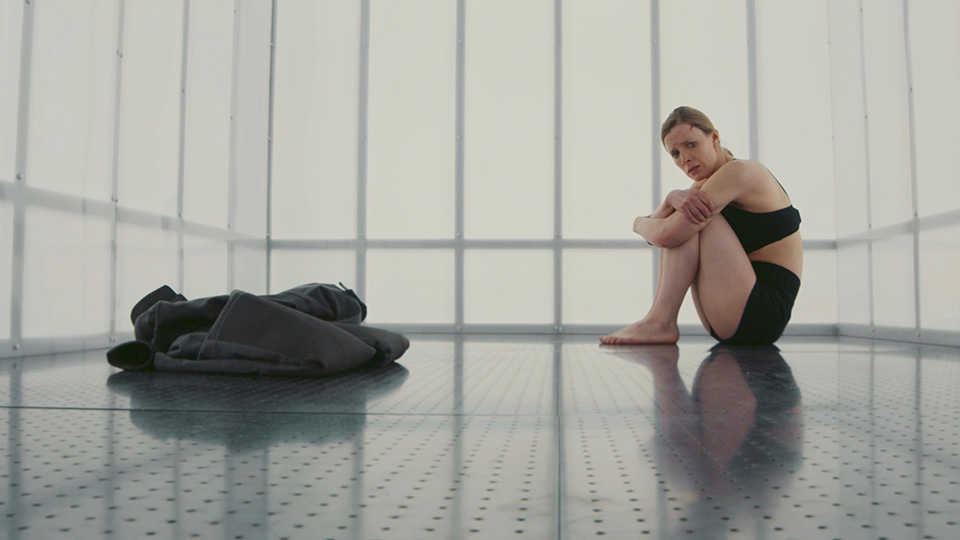 Ruth (Shauna Macdonald) wakes up in trapped in a white chamber. With the voice of a menu giving her instructions, Ruth is tortured using the various devices within the chamber as her captor believes her to have some useful information. Adamant that she is merely an admin worker with no knowledge of what goes on inside the facility that employs her, Ruth has to use her smarts to survive. The action then jumps five days prior to slowly unravel how Ruth came to be in the chamber in the first place.

White Chamber is from writer/director Paul Raschid and it’s an attempt to connect with an audience that finds themselves in a scary and unsettling political climate. It’s established at the start that we are seeing a future version of the UK where law and order, and indeed society, has broken down. As war rages, with the hope that the UK will get back on its feet and be stronger than ever, the facility that Ruth works in appears to be up to something pretty dodgy.

I can’t really say too much else about the plot as it would give away a huge spoiler, which would lessen the impact if you do get around to watching it. What I can say is that once the story jumps back five days, you start to understand the dynamic between Ruth and her captor, and it’s pretty clear that what you think you know, may not be what you know at all. Raschid is hoping to play on people’s fears by being deliberately political as we have Brexit hanging over our heads.

Unfortunately where White Chamber stumbles is in its logic. It doesn’t actually make a whole lot of sense when you start to dig into it and I felt that the film thought it was being a lot cleverer than it actually is. The premise is solid and it’s definitely intriguing but for me, the film revealed its hand too quickly and too easily. There is an attempt to explain why the white chamber exists but it’s a bit woolly and not wholly convincing.

Shauna Macdonald (The Descent) gives a solid performance and she is required to go through a fairly large range. She’s a great actress but honestly she’s better than the material here. The same can be said for Oded Fehr who may or may not be Ruth’s antagoniser. He doesn’t get as meaty material as Macdonald but he’s always a compelling screen presence who ensures your eyes stay on him.

White Chamber doesn’t have the most original premise but it is packed with some creative ideas. The execution is a little sloppy and the pacing uneven and at times a little dull. It’s understandable that Raschid would want to make a political film given the current climate but it’s an uneasy mesh with science-fiction and a small dose of horror. White Chamber could have been so much more but by the time it finished, it left me feeling indifferent.