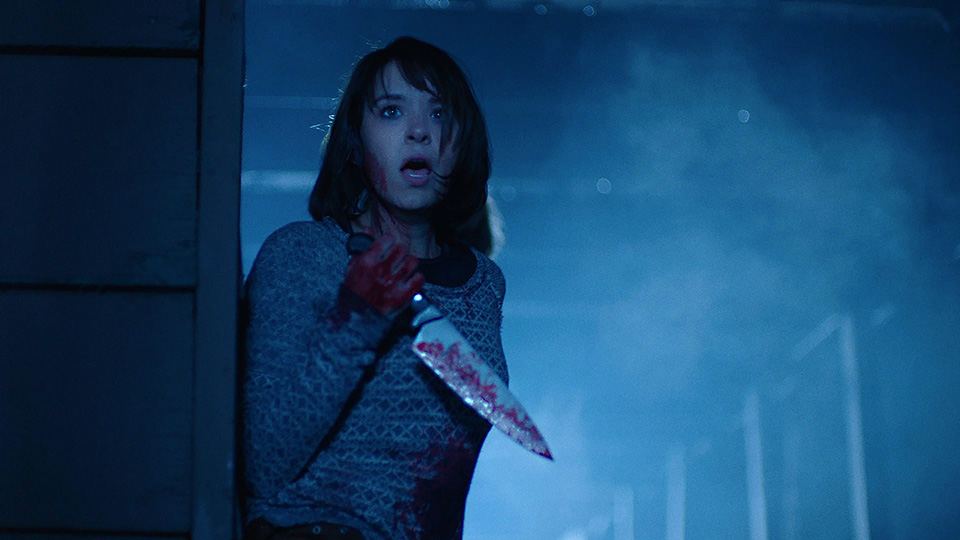 Casey Pollack (Brea Grant) takes her family to a remote cabin in the snowy mountains for a vacation. Her husband James (AJ Bowen) is suffering from cancer and Casey is hopeful the break will do him good, especially as the cabin is supposedly built over some supernatural rocks with healing powers. As the family settles in, they come across a woman who is unconscious in the snow. Helping her inside, they learn the woman is called Leslie Bison (Barbara Crampton) and it soon becomes clear she has no intention of leaving. Casey goes off to get an ambulance but when she returns, things turn very dark and the family is left fighting for their lives.

Quite honestly I’m not entirely sure where to start with this one. Barbara Crampton is a genre legend and she had two films showing at Arrow Video FrightFest over the weekend (this and Puppet Master: The Littlest Reich). Anything with Crampton in is always worth a look and she’s far and away the best thing about this confused mess of a film. After doing a little research it appears that the version that’s doing the festival circuits is one that has been heavily edited after the initial cut got a poor response. Well I can’t speak to what that cut was like but this one isn’t great.

Dead Night tries to pack in far too much. There’s an underlying weird mystical society, a split narrative that jumps between the action and a true-crime documentary about Casey Pollack, that suggest she killed her entire family in cold blood, and some seriously gory moments. Had the film just concentrated on being a straightforward slasher, it likely would have been much better. Instead it piles on weird and random twists to the point where you’ve no idea what on earth’s going on or why.

On the plus side there are some really great practical effects and they look pretty convincing. At one point Casey is grappling with another character and rips its jaw off. She’s left holding it in her hands, looking horrified and it’s a glorious moment that horror fans will love. Despite the obvious low budget, the production values are decent too with the film looking, for the most part, fairly polished.

Alongside the kitchen sink approach to the narrative, there’s some very dodgy acting. Crampton is good fun, as always, and Brea Grant does a solid enough job as the main protagonist. The rest of the cast is pretty hit-and-miss though but to be fair, they’re not helped by under-written material and poor dialogue. It’s hard to get on board with any of these characters as you’re never given any reason to care for them.

Dead Night could have been a guilty pleasure horror that you enjoy with a bucket of popcorn and a few beers. Sadly it’s a complete mess and completely lacks any semblance of cohesion. Director Bradford Baruh and writer Irving Walker clearly had plenty of ideas but they weren’t able to translate them into a watchable film. That’s a real shame as this could have been a whole lot of fun.

Dead Night will be released on DVD on 8th October 2018.