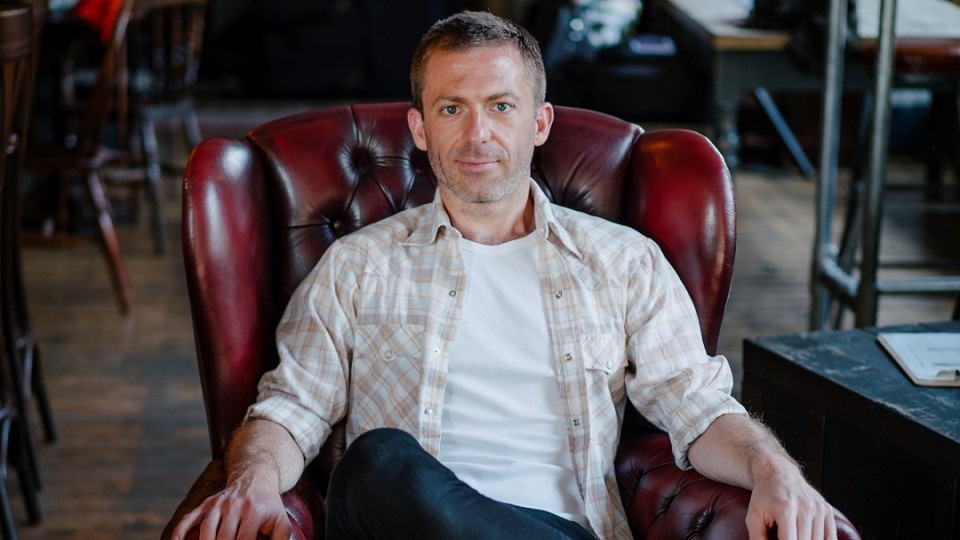 Many musicians say their families were a big influence on them, but folk and jazz artist Ben Somers was virtually born in ‘the dressing room’

Inspired by his dad – who was and still is an active musician – and artists such as Sonny Rollins and Willie Nelson, Somers has been playing music since he was 16. He’s toured with artists including Seal, Taylor Swift and Dr John, and recorded country album  The Highway Is My Home with his dad as The Steve & Ben Somers Country Band in 2016. Following his 2017 bluegrass album Live At De Melkbus, Somers is due to release his debut solo album Poor Stuart next month.

Ahead of the album’s release I spoke to Ben to learn more about the record, his songwriting process, what he’s learnt from touring and playing with folk legend Eliza Carthy.

Your new record is coming out next month – what can you tell us about that?

The album is the most refined point I’ve come to in my career. I play many different styles of music and it’s the first recording where I think it really embodies everything that I’m about musically. It contains bluegrass, jazz, European folk music – all of those things. I think this time in comparison to other recordings I’ve done it has some kind of cohesion between all the styles. I certainly feel it has anyway. So it officially comes out on September 7th but we’re doing a week-long tour before that and we will continue to tour after that as well. There are three other people in the group – one from Sweden, one from France and one from the North of England, and I’m from London. So it’s difficult getting everyone together but it’s a worthwhile project to put that effort into.

Why did you feel that now was the right time for this particular record?

I work very hard and I practice a lot every day. I write a lot and I try and find a direction through all of the styles of music that I’m passionate about, and I just decided to do a recording with this group of musicians. And it’s not particularly that I chose this time, it just seemed like my artistic writing finally came together I suppose.

Well the title track, Poor Stuart, I pretty much wrote in a day. It just seemed to happen that way. I guess that was the easiest one. Everything on there – all of the original songs – I wouldn’t call myself prolific, so I work quite hard writing music. Occasionally it’s happened very easily but certainly not every time.

You’ve mentioned the tour in September. What can people coming to see you then expect?

Hopefully a very fun mixture of music. I certainly like to give myself to anyone that comes to see me, and I mean from an emotional perspective. I love playing music, I love writing music, and I really try and let go of everything that I’m thinking about and just really play and hopefully make people smile, laugh. It’ll be something which is serious and not serious all at the same time.

Is there anyone you’re particularly looking forward to visiting on this tour?

I’m really looking forward to all of them because they’re all very varied. But I am particularly looking forward to the London show at The Green Note in Camden. It’s one of my favourite venues to play, it’s a very intimate venue and you really feel like you’re within the audience. It’s wicked.

Do you have a typical writing process? Has that changed over time?

I suppose it has changed, yeah. I approach each song differently. Obviously I write a mixture of instrumental tunes and songs. Actually quite a few of the songs on the album I felt quite inspired to write. There were more songs I recorded but which I decided weren’t up to a level that the ones I used are. I’m very melody-based, I find that comes quite naturally to me. Saxophone is my first instrument so I’ve always been quite a melodic player, although I now play double bass and saxophone about the same amount. Melody is something which comes to me relatively naturally.

And then the other songs that I wrote are pretty much from experience. Life On The Road which is one of the new tracks, I wrote after being on tour with some American guys that I’d been touring with from Montana, who are great songwriters and seem to be able to capture moments in time and put them into song. For me it’s much nicer and more personal to have that than, say, a load of photos.

What’s the one thing you’ve learnt from touring?

That it should be savoured. I love being on the road. I feel as musicians we’re so lucky to have such a varied and interesting life, and I take great inspiration from being on the road and being with the musicians I’m with and bonding and being able to create something night after night which is hopefully different night after night. I’ve done a lot of pop music which is not like that. But also I think because I do feel so lucky it’s important to share that with people who come to listen to the music. Everyone has a very, very different life and I think in this day and age where everyone leads a kind of virtual life which is somewhat engineered and perhaps a little bit unreal, I really wanna share my real human experience, a lot of which comes from being on tour. So I guess what I’ve learned is how to be around people and how to share and how to savour all of the human experiences we have.

What got you into music, and what made you decide to pursue it as a career?

Well it all comes from my dad really. He was a professional musician – I guess you would still call him a professional musician although he’s past retirement age. And I didn’t start playing any instruments until I was 16 and my dad brought a saxophone home for himself, just to mess around on. I asked if I could have a go and he showed me a few things and I just didn’t put it down. I wouldn’t say it was a conscious decision to become a musician. It was just something that was incredibly natural and important to me right from the very beginning. And being around music all the time when I was a kid. It’s just the most natural thing I can imagine and I’ve never done anything else.

You played with Eliza Carthy on stage recently – what was that like?

It was great. It was really inspiring. She is a musical force of nature and it was great to learn her music and play her music. And then alongside that it was at Shakespeare’s Globe and there was quite a lot of dressing in tights and being on stage, which I have to admit I was quite into. So yeah, hopefully that won’t be the last time I play with her.

Is that stage performance aspect something you’d like to do more of in the future?

Yeah, I’d love to. One of [Eliza’s] musicians is a very close friend of mine. We do a lot of playing together so I’m sure it’ll arise again.

Oh, that’s a good question. Err… that is a great question. I’d love to have prepared for this one because I’m gonna kick myself afterwards. I think I would want to have written Funny How Time Slips Away by Willie Nelson.

I’m very, very active. I’m pretty much doing something musical most nights of the week. I tend to gig four or five times a week and so they’ll be ongoing. These days I don’t tend to do too many things that I don’t enjoy, which was certainly not the case. When I was at university studying jazz I did a lot of corporate gigs and those kind of things. So obviously I’ll be concentrating on the record and although the record is very important to me, playing live and creating in a live situation is probably the most important thing to me. So I’ll be doing that and then I’ll be pushing my brass band, Brass Hysteria. We have a steady stream of gigs coming in. I also have a new brass project which I’m writing for. We’ll be playing upstairs at Ronnie Scott’s coming up.

And playing with my dad, that’s a very big focus. I think we’re gonna write a record together. We made one record which was mainly covers, so we’re working on a new one at the moment which is in the vein of country music and Americana. But as with my string band which maybe started off as a traditional bluegrass and old time band, and now with the plans with Dad I don’t want it to be just a pastiche. I want it to be our thing.

See Ben on tour in the UK this September:

Advertisement. Scroll to continue reading.
In this article:Ben Somers