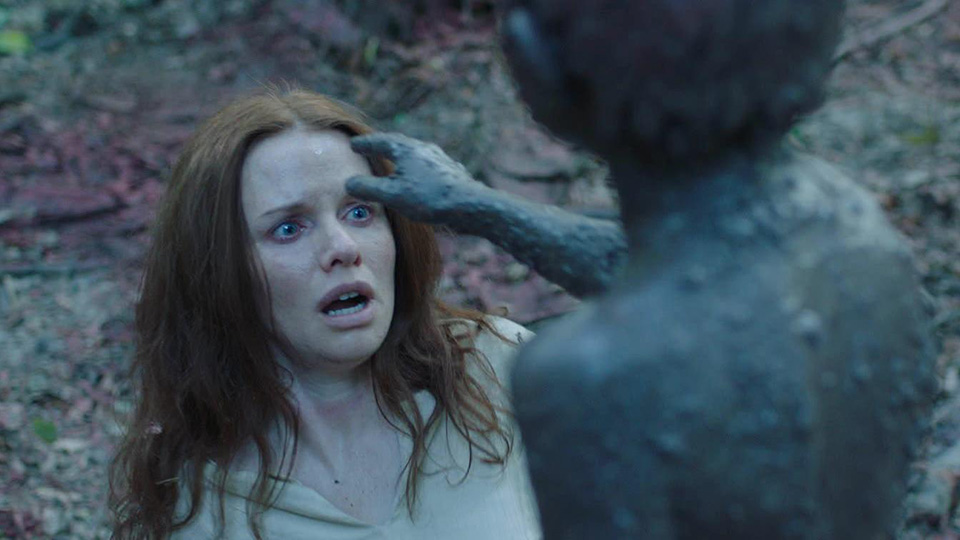 Hanna (Hani Furstenberg) is experiencing problems in her marriage to Benjamin (Ishai Golan) following the death of their child several years earlier. On the day her sister is getting married, the town is threatened by Vladimir (Alex Tritenko), the leader of an outsider community. Arriving with his desperately ill daughter, he refuses to leave until she is cured and threatens death if they aren’t able to help her. Hanna proposes they use dangerous scripture to raise a golem to protect them, something she is warned against doing. She does it in secret and becomes fiercely protective of the boy, turning a blind eye against the havoc he starts to cause.

Written by Ariel Cohen and directed by The Paz Brothers, The Golem is fresh out of post-production so the audience at Arrow Video FrightFest 2018 were the first to see it. Anticipation was high and with it being the penultimate film at the festival, there was a lot of expectation. The opening shows The Paz Brothers’ eye for eye-catching cinematography and the film looks really great. They’ve captured the period feel well and it feels authentic.

Despite an intriguing premise, The Golem moves at a glacial place and I unfortunately found it incredibly dull. The plot becomes very predictable and there are barely any surprises. From the moment the golem arrives, it’s pretty obvious how things are going to go down and that Hanna is going to be protective of the replacement child she’s conjured. My other issue is that I didn’t find it remotely scary either so it was disappointing on that front too.

The only character in the movie that has any kind of fleshed out story is Hanna. Hani Furstenberg is compelling on screen but I really felt that she didn’t have all that much to work with. It was understandable why Hanna behaves in a reckless way but it’s less believable that she wouldn’t connect the dots when people start getting murdered, shortly after The Golem arrives. The rest of the characters barely make an impression so you don’t particularly care about them, even when they’re in peril.

As the credits rolled I felt a sense of relief. Having seen a lot of films the past five days, this is the first one that I found to be a struggle to get through. I could see what Cohen was trying to do with her story but it was all just a little too slow-moving and dull for my taste. The film looked pretty nice but the story could have gone to darker and scarier places than it did.