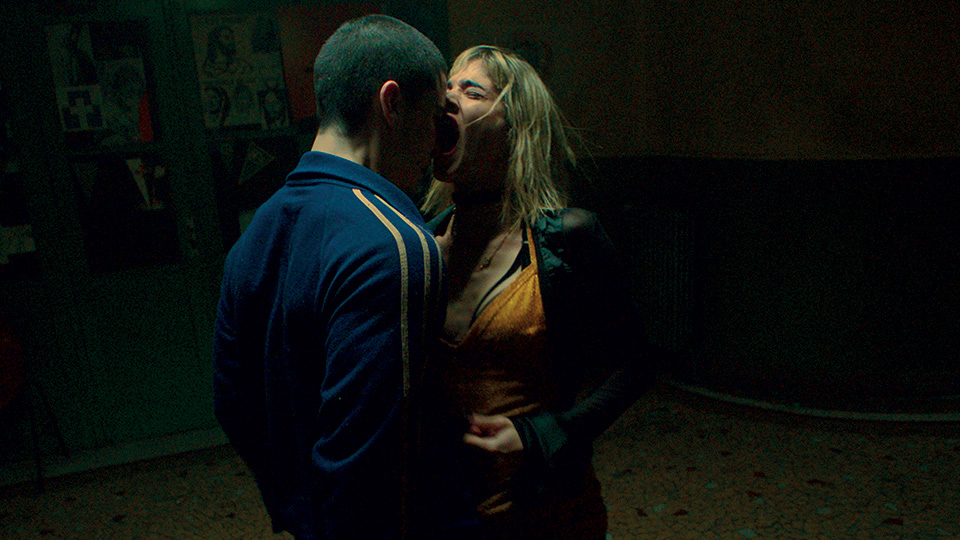 A group of dancers finish their rehearsals and decide to let their hair down with a party. As the music cranks up and the partying gets underway, the group start to drink and do drugs unaware that someone has spike the punch. The evening begins to spiral out of control as jealousy, anger and built-up hatred start to show among the dancers.

Climax is the latest film from provocateur Gasper Noé and as always, it’s going to be an incredibly divisive experience. Opening with a woman stumbling in the snow and covered in blood, Climax wants you to be uncomfortable from the very start. The film cuts to a series of interviews with the dancers before jumping to an extended dance routine that while visually impressive, goes on for so long that I was beginning to wonder if there was going to be any plot. That question was answered next when the film’s sole plot point – the punch being spiked – reared its head and things go bat shit crazy.

Now I’m all for arthouse cinema and film-makers who do something out of the ordinary but Climax left me completely cold. From the attempts at randomly ordering the film (the end credits come at the start and the opening credits come nearly an hour in) to the endless swirling and twirling of the camera – to the point where you can’t actually tell what’s going on – Climax aims to be a visual feast but there’s little substance behind it. What you’re essentially presented with is a group of horny and angry young dancers off their faces on LSD acting like crazy people. Maybe it’s my lack of doing drugs but it’s not an experience I enjoyed or am keen to have again.

Just to be provocative, Noé throws in some nasty moments like a pregnant dancer being kicked repeatedly in the stomach before later punching herself in the stomach and slashing her body with a knife while her ‘friends’ encourage her to kill herself. Nice. He also throws in a nice slice of incest because who doesn’t love that subject being explored for no reason other than shock value?

It’s actually near impossible to single out any of the cast as they don’t do much other than dance, scream and run around. Sofia Boutella as Selva spends most of the film hysterical but still manages to dance her way through the long and winding corridors of the building they’re rehearsing in. The dialogue is almost non-existent for the second half of the film too as the pumping dance soundtrack never lets up, adding to the intense and claustrophobic feel of the film.

As the film ended I could hear people exclaiming that Noé is a ‘genius’ and that the film was ‘the most incredible achievement in cinema so far’. I’ve no idea what film those people were watching but it didn’t seem to be the same one that I saw. I’m sure people will read this and say, ‘he didn’t get the film’ or some such but actually I just thought it was a bad film. In fact, I’d go so far as to say it was one of the worst films I’ve ever seen in my life.