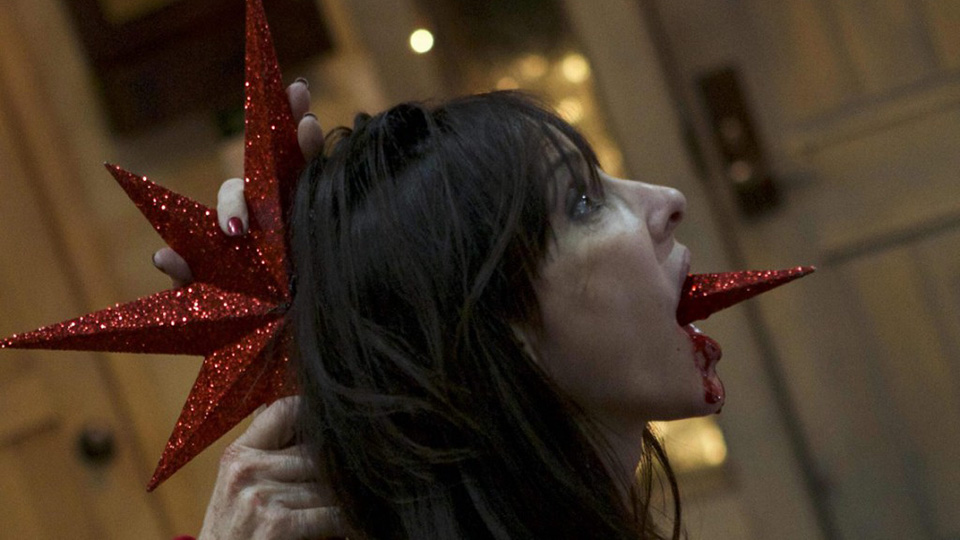 April (A Leslie Kies) takes her boyfriend Ty (Michael Rady) home to meet her dysfunctional family at Christmas. Hosted by her sharp-tongued mother Shari (Debra Sullivan), the family is thrown a curveball when the patriarch, Leonard (John Gilbert) shows up announced. Barely able to keep things civil during the meal, a row breaks out that causes the whole family to start airing their grievances with one another. Leonard and his son Jackson (Nathan Hedrick) lose their impulse control, resulting in the death of one of the party. The two men are locked in a room with the dead body, while the rest of the family try to figure out what’s going on.

Secret Santa has all the ingredients to be a festive horror classic. With Adam Marcus (Jason Goes to Hell: The Final Friday) directing and co-writing, the film looked like an absolute hoot and it’s one of the films I was most looking forward to seeing. Unfortunately, for me, it was way off the mark and what started out with a lot of promise, quickly descended into a completely OTT farce. What I found even more bizarre is that it didn’t seem that all of the cast were acting in the same film with A Leslie Kies, who was easily the best here, giving a very straight and strong performance while everyone around her chewed the scenery.

Where the main problem lies with Secret Santa, is that it has no idea what kind of film it wants to be. The comedy and the gore didn’t really work all that well together, and after the first half an hour it pretty much turns into a showcase for who can give the most OTT performance. Nathan Hendrick wins that title as Jackson, shouting his way through his dialogue and grotesquely following through on a promise to ‘skull fuck’ one of the other characters.

There are some decent performances outside of Kies’ turn. Drew Lynch brings a little sweetness as closeted Kyle and Michael Rady, most recently seen in Timeless, is as winningly charming as ever. They were the film’s saving grace but none of the actors had all that much material to do a great deal with. A few things are thrown out in the early part of the film to highlight how damaged and awful these characters are, but they are painted as so awful that you don’t really care if any of them die.

Something else I found jarring was the switch in quality from the steady cam to the roving cam. There’s a noticeable drop in quality when the roving cam takes over and the film looks very different. I get that the director was trying to show the hazy and confusing nature of the situation but it just didn’t really work for me.

Secret Santa was a complete disappointment. I was hoping for something that I could proudly group with the classic festive horror Black Christmas but sadly that wasn’t the case. With a poor script, a very mixed bag of performances and issues with tone, Secret Santa squandered what could have been a complete riot of a movie. The eventual twist I saw coming within the first few minutes and the film didn’t really live up to its promise.

Secret Santa is part of the recently announced FrightFest Presents series and will be getting a home entertainment release in November 2018.