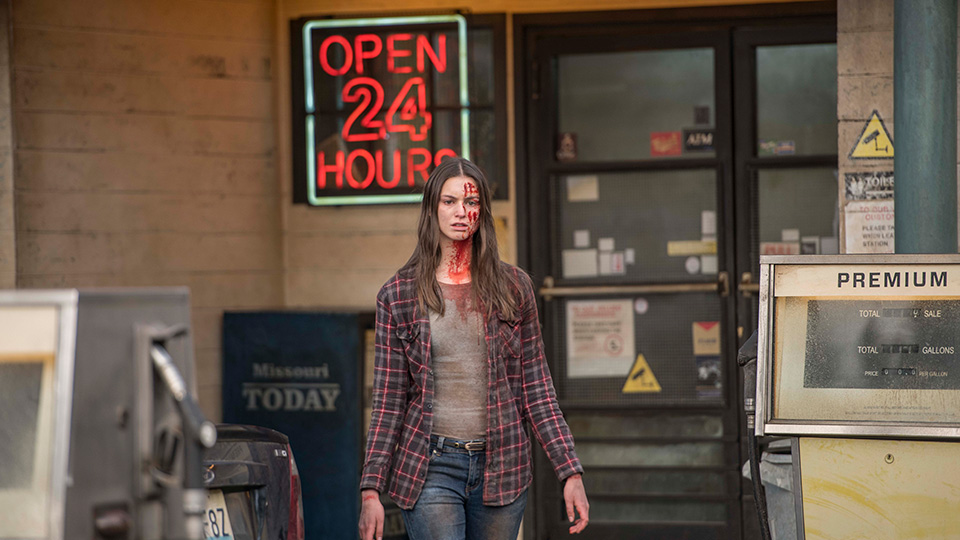 After serving time for setting her serial killer boyfriend on fire, Mary (Vanessa Grasse) is released from prison and applies to get a job at a 24-hour gas station. Despite her criminal record, the owner decides to give her a chance and asks her to start work that evening. Suffering from paranoid delusions and hallucinations, Mary is traumatised by her past but wants to make a fresh start. During her first night at work, Mary starts to worry that her ex-boyfriend James (Cole Vigue) is coming after her but she can’t tell the difference between what’s real and what’s imaginary.

Padraig Reynolds is the writer and director for this hybrid horror that combines psychological terror with the slasher genre. Much of the action takes place in the gas station that Mary gets a job at, giving the film an intense feeling of claustrophobia. Mary’s past, and the reasons behind her extreme act, are revealed in due course and she is watched over by her parole officer Tom Doogan (Daniel O’Meara) fearful that if she admits her hallucinations, she’ll return to prison.

Open 24 Hours is a slow burn. Reynolds takes his time to tell Mary’s story, which allows the audience to understand and relate to her. She’s not a bad person but she did a bad thing, and that can be a hard distinction to make for some people. Mary is supported by her friend Debbie (Emily Tennant) as she makes positive steps to turn her life around and move past the horror of witnessing her ex-boyfriend’s actions. By the time things take an inevitable turn for the sinister, you’re invested in Mary and want her to make it through this ordeal. It’s quite fun trying to work out whether she’s hallucinating or not, and that definitely adds to the film’s tension and suspense.

Vanessa Grasse, one of the stars of last year’s Leatherface which was shown as FrightFest, is compelling in the lead role of Mary. She puts on a very convincing American accent and she excels in the moments where Mary is battling with her imagination. Grasse is able to conjure up real right in her eyes when needed and she delivers some of the film’s more emotional scenes impressively. I enjoyed her chemistry with Brendan Fletcher who plays co-worker Bobby. The two share a very emotional scene where Mary opens up about her past and there was a real spark between them.

For the most part Open 24 Hours is a competent and effective horror. There are a few issues with the script that made the audience laugh, which I’m sure wasn’t the intention, but it’s par for the course in a horror movie. Reynold’s direction is fairly tight but the film would have benefitted from being around 10 minutes shorter. Some scenes felt a little too drawn out and the climax could have been trimmed ever so slightly. Overall though Open 24 Hours is an effective horror with plenty of blood, a few decent scares and a strong central performance from Grasse.