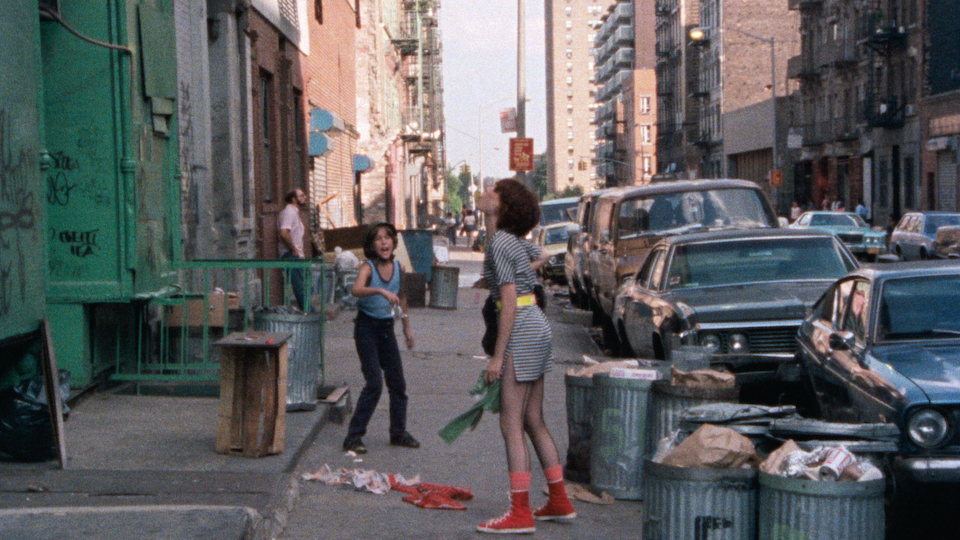 The punk-era classic Smithereens, the debut film by Susan Seidelman (Desperately Seeking Susan, She-Devil, Sex and the City) makes its UK blu-ray debut this week, courtesy of this newly restored edition from the Criterion Collection. Thankfully it hasn’t been restored too much, so retains the era defining lo-fi style of early 80s New York.

Smithereens follows Wren (Susan Berman), a young woman who has come to New York to make it in the punk scene. In her iconic fishnets and black-and-white checked sunglasses, she buzzes around New York, pasting flyers of her face around the city, with the words “Who is this?” emblazoned on them. Unfortunately for her, no one cares. She is trying to generate mystique, and ingratiate herself with the punk bands playing at the Peppermint Lounge.

Like so many before her, and so many that came after, Wren wants to reinvent herself in New York and find fame and acclaim. But the reality of her situation is far from the dream she imagined. Kicked out of her apartment, she flits between the two men in her life, the nice-guy Paul (Brad Rinn) who lives in his van, and Eric (Richard Hell), a punk singer from the band Smithereens who wants to up sticks to Los Angeles where the punk scene has migrated. She wants to go with him. He doesn’t seem to care less if she’s with him or not.

The film moves at a relentless pace, as Wren buzzes around downtown New York, high on adrenalin trying to earn a dime and find a bed to sleep in. When she makes the trip back to Jersey to ask her sister for financial help we almost miss the viciously cruel taunt from her brother-in-law, it is said so quickly. The only thing that doesn’t move fast in Smithereens, is Paul, who seems to spend his entire life sitting in the van waiting for Wren to show up.

Both the film and Berman’s performance offer no soft edges to this story. Wren is tough, selfish, deluded and obnoxious, and Seidelman doesn’t manipulate the narrative in any way to make her a sympathetic or likeable character. She is who she is – a twenty-something girl trying to survive in a hostile city – and you either come along for the ride or you don’t.

Unlike most movie characters, Wren doesn’t change, and this stubborn refusal costs her dearly. Seidelman pulls no punches in this unflinchingly bleak and desperate portrait of a young woman who is her own worst enemy. Smithereens, much like its heroine, is kind of scrappy and just goes round in circles. But it does so with bags of angry punk energy and style. For anyone who has spent time in New York over the past decade, and wandered the safe, clean, gentrified neighbourhoods of Manhattan, they will find Seidelman’s evocative image of urban squalor to be a fascinating vision of a city that no longer exists.

This new Criterion release comes with an optional audio commentary from director Susan Seidelman which was recorded in 2004. There is also a brand new 40-minute programme produced exclusively for this release, featuring new interviews with lead actress Susan Berman and director Seidelman. There is also two short films from Seidelman made when she was a student at NYU in the late 70s.