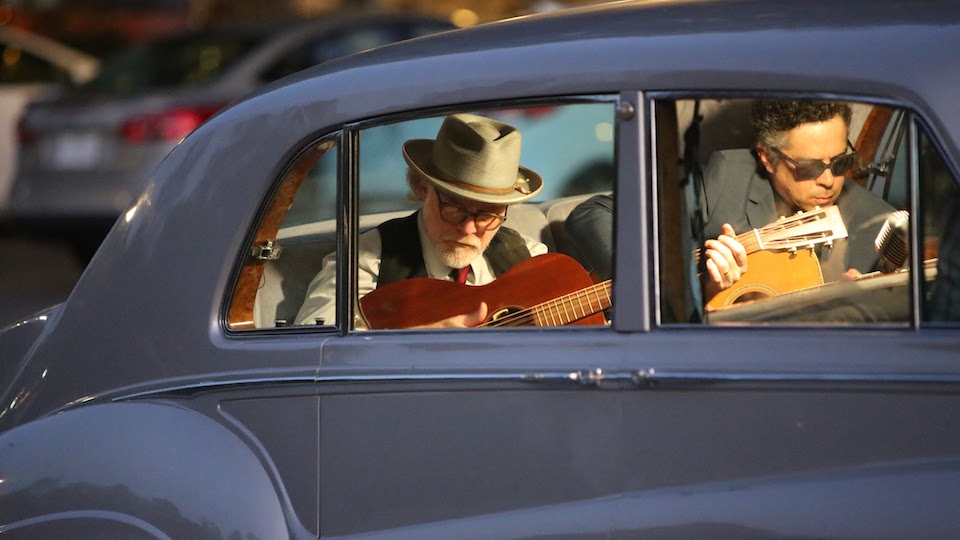 It’s the kind of analogy that at first makes you roll your eyes, but then the more you think about it, the more perfect it becomes. Eugene Jarecki’s incredibly ambitious new film The King, uses the life story of Elvis Presley as a metaphor for the American experience. It’s the story of a dirt poor boy from Tupelo, Mississippi, who worked hard and became the biggest star in the world. He was the personification of the American dream, that great lie which fuelled and fooled America during the 20th century, and made it the biggest and most powerful country in the history of the world.

But follow the metaphor to its logical conclusion, and clearly what Jarecki is suggesting, is that 21st century America is overweight, overdosing on drugs, and dying on the toilet. Switch on the news right now and it would be hard to disagree.

The film sees Jarecki – who has acquired Elvis Presley’s 1963 Rolls Royce Phantom and kitted it out with cameras – take a road trip across America, following the path that Elvis himself took. From Tupelo, Mississippi to Las Vegas, Nevada via Memphis, Nashville, New York, and Hollywood. Filmed during the final campaigning days of the 2016 Presidential election, Jarecki takes the temperature of the nation, during the political and cultural tumult that led to the chaos and divisions of the Trump administration.

Along the way, Jarecki picks up a number of different people to come with him on the journey. Musicians, actors, journalists, activists, all jump in the back seat to play music, talk Elvis, and contemplate the wonderful, strange, capitalist empire that is America. The cast is vast and eclectic, with artists such as Emmylou Harris, Emi Sunshine & the Rain, John Hiatt, Nicki Bluhm and the Gramblers, and Immortal Technique underscoring the film with their amazing music.

Public Enemy’s Chuck D, who famously rapped “Elvis was a hero to most, but he never meant shit to me”, features heavily in the film. Along with CNN’s Van Jones and David Simon (creator of The Wire) they talk about how the success of Elvis and his rise to superstardom was built on the appropriation of black culture. And does this not perfectly mirror the rise of America as a superpower – a nation built on bloodshed, violence, stolen land, stolen culture, and slavery? David Simon defends Elvis, as he argues the entire American experience is one of cultural appropriation.

As Jarecki eventually turns the Rolls Royce in the direction of Hollywood, we see the King, move in the same direction and – possibly against his will – sell out all of his artistic credibility. At the behest of his vile and controlling manager Colonel Tom Parker, Elvis would sign the biggest and most lucrative movie deal in history. It would wipe out the next ten years of his career, churning out garbage films and terrible music. As actor, writer, and polymath Ethan Hawke, now sat in the passenger seat explains, America’s main export in the first half of the century was agriculture. After Elvis, this changed to entertainment. Some might argue it was the beginning of an inexorable slide into decline for both of them.

With the King of rock n roll, now the King of Hollywood, Jarecki opens the doors of the Phantom to some Hollywood types. Alec Baldwin, Ethan Hawke, Mike Myers, and Ashton Kutcher, share their unique insights on fame, politics, and selling out. Kutcher is surprisingly candid about his own level of fame compared to what he has actually achieved as an actor. Though the most impactful interviews throughout the film are always with the non-famous folk. Whether they are fans of Elvis or detractors, Jarecki paints a picture of a country where the middle class has been completely eroded, and in its place an ever-widening void filled with apathy, bigotry, and hate.

There’s so much to unpack from this film, and it would be fair to say that Jarecki himself gets a little lost along the way, searching for what it is he is trying to say. He even asks one of his film crew, “what do you think I’m doing with this movie?” The crew member isn’t sure, but Jarecki continues on the road and fleshes out his theory. The story of Elvis and America merge in ever more unpleasant ways. A grotesque bloated King; a caricature of his former self. A grotesque bloated president; a walking caricature of American excess. Bear witness to the fall of a King and his country.

This film is enormously powerful. Like one of his other metaphors used early in the film, it is like being hit by Tyson – nothing is quite the same afterwards. Beautifully filmed in that classic American road-trip way, which romanticises and mythologises the landscape, the film is gorgeous to look at. Jarecki intercuts the glowing cinematography with chaotic montages of news footage, archive images, pop culture, music, movies, TV, and of course, incredible footage of The King.

Jarecki’s sprawling and epic exploration of his thesis is an astonishing achievement. A toe-tapping concert road-movie, a poignant treatise on American history, weaving the past and present with disconcerting ease, and a fascinating and even-handed insight into the life, career, and complex legacy of the most iconic entertainer that ever lived. I cannot recommend this film highly enough.