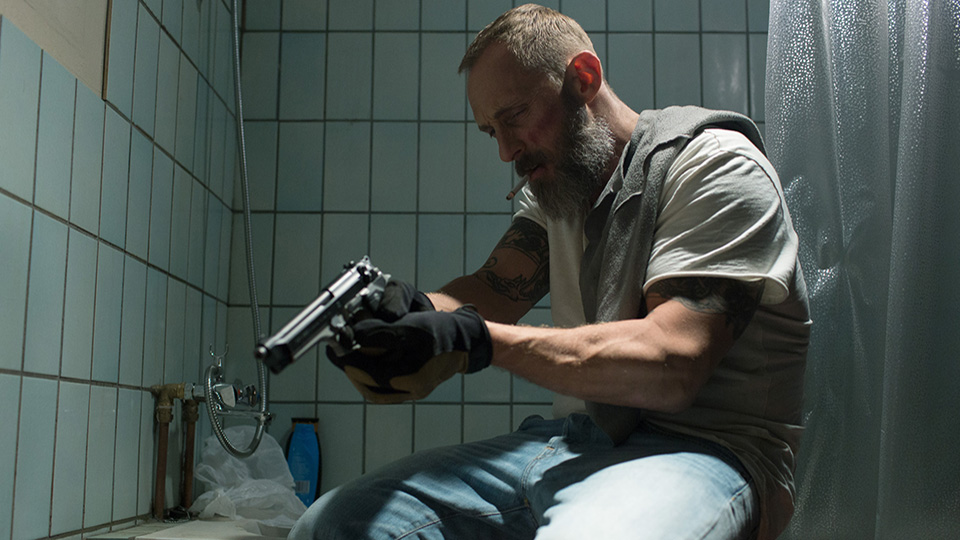 Ex-con Danny (Roland Møller) is released from prison and checks into a motel run by single mother Laurence (Veerle Baetens) and her daughter Clara (Lola Le Lann). Fitted with an ankle bracelet and under strict instructions to check in daily at a set time to meet the conditions of his release, Danny gets a job washing dishes at a local restaurant as he attempts to stay on the straight and narrow. Forming a friendship with Clara, Danny’s new start is threatened when she’s sexually assaulted and he takes matters into his own hands.

A Bluebird in My Heart is based on the book The Dishwasher by Dannie M. Martin. The film is a slightly left-of-centre choice for Arrow Video FrightFest as it’s more of a human drama with violence rather than horror. That having being said there is much horror to find over the film’s 85-minute run-time, especially once Clara is assaulted by her drug dealer. Director Jérémie Guez opts to not show the whole ordeal to the viewer, instead exposing the beginning of the assault and the aftermath.

Once Danny comes to Clara’s rescue, A Bluebird in My Heart really finds its feet and switches gears. Up until that point the film follows Danny as he tries to stay on the right side of the law. We get to know very little about him, not even what he was in prison for, but his character is revealed through his actions rather than his past. Clara becomes fixated with him, eagerly hoping to form a bond with him to replace her absent father who is in prison. Danny is reluctant at first and Laurence expresses her concerns over Danny intentions towards her daughter.

The relationship between Danny and Clara is what the whole film is built around and it’s the reason it’s so compelling. Danny unknowingly steps into a father role for Clara and the two are bonded by Clara’s traumatic assault. That incident sees a shift in their relationship and also puts Clara on a road to understanding the realities of becoming an adult. She loses her innocence in that moment and Danny opens her eyes up to the darker side of life and humanity.

Roland Møller is exceptional as Danny. The character may say relatively little over the course of the film but Møller communicates plenty via his physicality and his facial expressions. He makes Danny feel like a gentle giant, even though we know the character has an aggressive and violent side. His scenes with Lola Le Lann’s Clara are the best in the film and you feel the unspoken bond between the two throughout the film. Le Lann really steps up her performance in the second half of the film and she provides a startling contrast between the Clara you meet at the start and the one you’re left with by the end.

A Bluebird in My Heart is a remarkable film. I found myself getting very invested in Danny very quickly and I rooted for him throughout the film. Guez really concentrates on developing the characters and that pays off, ensuring the audience can connect with a lead character who has a very ambiguous and most likely unpleasant background. A Bluebird in My Heart is surprisingly touching with shades of classic film Leon scattered throughout.

A BLUE BIRD IN MY HEART from FrightFest on Vimeo.